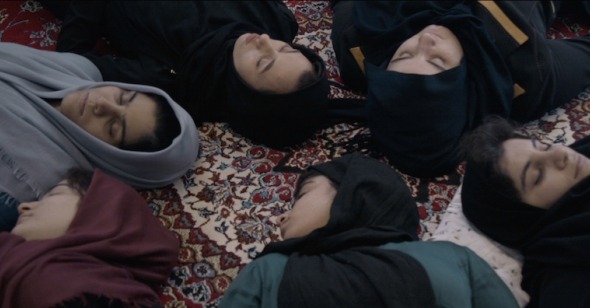 Women Inside
By Susannah Gruder

Sunless Shadows screenes, along with three other Oskouei films, in Museum of the Moving Image's Virtual Cinema, from August 5 to September 17.

The sense of quiet that pervades Mehrdad Oskouei’s Sunless Shadows shouldn’t be mistaken for calm. On its surface, the film, a continuation of the Iranian documentary filmmaker’s previous project Starless Dreams (2016), examines life inside a female juvenile corrections center near Tehran, where teenagers wait out sentences for serious felonies, from drug trafficking to armed robbery. Their days are portrayed as somewhat languid, spent largely in one big room where they eat, sleep, and take part in a host of relaxing activities like pottery and meditation. Oskouei slowly chips away at this peaceful atmosphere, spending the majority of the film listening to each woman’s inner struggles, as they wrestle with the crimes they’ve committed and the prospect of life after prison.

While Oskouei continues the off-camera interview style from Starless Dreams, in which his tranquil, sonorous voice entreats his subjects to speak candidly about their circumstances, here he introduces the device of a special room where the women are invited to speak directly to camera without the director present. We hear them press “record,” sit down, and address their victims or accomplices, tearing down the veneer of stability that they otherwise put forth. It’s a move that deepens the emotional reach of Oskouei’s project, handing over the reins to each woman in order to share her story and her complex struggle on her own terms.

Oskouei has significantly narrowed his subject pool from his last film—Sunless Shadows focuses solely on women who have murdered a male family member. There’s a cognitive dissonance that sets in as we witness the emotional testimony from each young woman. It would not feel inaccurate or belittling to refer to them as “girls,” as some are no older than 15, their faces still youthful and their voices soft and shaky as they hold back tears before the camera. The longer we watch and listen to them, their downcast expressions emerging from their dark hijabs or chadors like women in mourning, the more we wonder what could have driven them to these acts.

Oskouei probes the causes of each murder, inquiring into the culture that limits women’s ability to seek help in dealing with abusive men. In all cases, the fathers, husbands, uncles, and brothers-in-law were violent in some way (in Starless Dreams, Oskouei asks his subjects if a man would “bother” them, putting the word in quotations so as to suggest a darker meaning). In several cases, a woman sought divorce but was not granted permission by her husband. One young woman, Negar, speaks to her mother on camera, who is on death row with her older sister for killing her husband with the help of her daughters. “I felt terrible when he would beat you and I could do nothing to stop him,” says Negar. “I might not have let you see it, but my insides were torn apart.” Oskouei cuts to a shot of her mother and sister watching this confessional. The camera behind them, they weep quietly. Only the backs of their veiled heads are visible, but the shot transmits their anguish and stoicism on a visceral level.

Gradually, through interviews with both the young women and their mothers and sisters, the direness of their situations emerges, and we see why they were pushed to extremes to end their suffering. Oskouei has long been interested in exploring what leads people to commit crimes—he’s been filming at the same corrections center for 13 years. His previous films, It’s Always Late for Freedom (2007) and The Last Days of Winter (2011), tracked the lives on the boys’ side of the same facility. His fascination stems in large part from his personal history: both his father and grandfather were imprisoned for political crimes, and at 15 he attempted suicide following his father’s third bankruptcy. Many of the women imprisoned have tried to kill themselves or have family members who have done so. Oskouei’s compassion, and even admiration for these women is palpable—he and his cinematographer Mehdi Azadi capture them with care and respect, highlighting their thoughtfulness, gentleness, and intelligence. They film the young women playing charades and soccer, taking care of ducklings or one woman’s infant child, and studying English with enthusiasm, making the case that in the right kind of environment, anyone can thrive.

The world of the corrections center is indeed a kind of strange utopia, free of men and filled with women who have undergone similar traumatic events. Oskouei drains the color from the images on-screen, making the prison and its exterior appear even drabber than it must be in reality, but the girls’ energy brings life to this otherwise dull palate. It’s no wonder why Somayeh, whom we had met in Starless Dreams while serving her sentence for murdering her father, returns to visit two years after being set free. “It’s great in here,” she says. “It’s boring outside.” Inside, the young women sit and talk on each other’s bunks, cook and serve their meals together, and celebrate one another’s birthdays. During a guided meditation with classical music playing softly in the background, Oskouei vividly captures the therapeutic sensation of physical touch, as the instructor gently steps on each girl’s feet. We watch the women bathe and tend to Mohammad, one woman’s baby boy. The camera later observes him napping peacefully on one of the bunks, his stomach steadily moving up and down as he smiles in his sleep—a fantasy of women living in harmony, raising a boy in a world without men.

The corrections center actually functions as a reprieve for many of these women, who went from abusive childhoods straight into abusive marriages when they were as young as 12. The fact that a male filmmaker is let into this world shows the subjects’ trust of him. They call him “Uncle Mehrdad” and seem to have grown comfortable enough to even have a little fun with the director. In Starless Dreams one girl grabs the boom. “The mike always makes me want to sing,” she says, before belting out a soulful tune as the rest of the girls join in. In Sunless Shadows, the girls mimic Oskouei, holding a prop up as a microphone and interviewing each other about whether a husband has the right to beat his wife. In Starless Dreams, one girl confronts Oskouei with anger during an interview. “You shouldn’t have told us you have a daughter,” she says. “She is being raised with love and comfort, we were raised in rot and filth.” It’s the same thought many might have while watching a nonfiction film that seeks to highlight injustice or hardship: the filmmakers get to return to their lives once the day is done; the subjects are not as fortunate.

Oskouei prioritizes the voices of his subjects by leaving in moments like these, capturing the full range of their feelings. He’s explicitly stated his goal in making these films is to tell stories that women cannot tell themselves. “Ever since the revolution here [in Iran], we haven’t been able tell the most truthful stories about the situation for women in my country,” he told Variety. “I decided to make a film about women and children for this reason.” Sunless Shadows is filmed with a subtle poetry; Oskouei lingers over quiet moments that seem inconsequential—a girl staring off in the distance, a woman’s chador blowing in the wind—but there is profound intention behind every shot. At one point a dove gets stuck inside their room, flying around until one of the girls catches it. Later, another girl sits outside stroking a dove’s feathers before releasing it. As it lands on the roof, she watches it, waiting to see if it will choose to fly away.