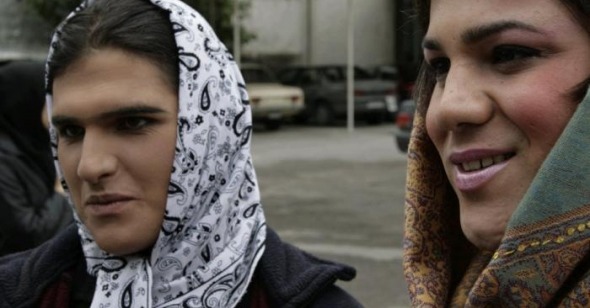 It undoubtedly would come as a surprise to most American audiences that sexual reassignment surgeries are not only legal in Iran but also provided free of charge to anyone who seeks them. This is the focus of Iranian-born, American filmmaker Tanaz Eshaghian’s documentary Be Like Others, an intimate examination of the intersection of state power, science and religion, gender and sexuality. In the film, at the vortex of these various forces are the bodies of two young men who opt for the surgery: Ali and Anoosh.

Early on in Eshaghian’s probing film, she interviews a doctor who performs these surgeries, as well as Vida, a postoperative male-to-female, and both speak highly of the procedure as the only option for Iranians who have homosexual desires. Vida, who works as a kind of counselor for those who are going through the surgery, emphatically reiterates the official government policy on gender and sexuality: Homosexuality is a disorder that can and should, in the eyes of the religious leaders who prescribe it, be addressed by “straightening out” one’s gender; desire between two men or two women is not permissible. Vida, who as the film goes on appears more and more like a government mouthpiece, insists that she finds homosexuality repugnant, that she is not a homosexual; rather she is someone who was truly born the wrong gender. Other interviews throughout Be Like Others, from another doctor who completes sex reassignment operations to a cleric who explains the significance of the religious decree condoning the surgeries to the families of those who hope to have it, reemphasize Vita’s point.

The government logic goes something like this: as intelligent human beings endowed with the capability to reason, it is necessary to correct what is a “mistake” of nature, a man or woman who feels desire for a person of his/her own gender or feels that they are born the wrong gender, by providing them with a surgical option, science at the service of religion. Sexuality and gender are conflated, and the binaries of male/female and corresponding heterosexual desires are policed and enforced by the state in the form of this incredibly drastic surgery. The central irony of Be Like Others is that this liberating move, the use of medical technology to become genuinely and authentically one’s “true self,” is simultaneously a form of government control over sexuality and the body.

Despite the fact that the surgery is legal, it is by no means universally socially acceptable in Iran. Ali and Anoosh, the two young men that the filmmaker chooses to follow through their path to surgery both face resistance from family members. Anoosh’s mother, who seems to be raising Anoosh and his brother on her own, appears resigned to her son’s decision, as Anoosh’s partner has promised to marry him after the surgery. His partner, a brooding and stylish young man who works at a salon appears indifferent to the conversation. While this arrangement seems a pragmatic one for a couple that could not otherwise legally be together, the degree to which Anoosh’s partner will still find him attractive as a woman is an open question in the film, and a crucial one for the filmmaker’s critique. Anoosh’s partner is reluctant to wholeheartedly approve of the operation, raising the real possibility Anoosh could be dropped post-op. Will sexual reassignment surgery bring Anoosh happiness and acceptance or just further rejection?

The stakes are much higher for the film’s other main subject, Ali. While Anoosh’s mother appears reluctant, she eventually acquiesces to Anoosh’s desire to go through with it; Ali, however, faces his decision without the support of any family members. In fact, it is understood that his choice will more than likely result in his permanent estrangement from them. Despite familial pressures, some young men (and ostensibly, young women, though we don’t meet any in the film), opt for the surgery. While some, like Vida and Anoosh, appear satisfied with their decision, others, like Ali, face tragic consequences as a result of a general lack of social acceptance for their position as transgender.

Be Like Others pays close attention to the complicity of the medical professionals who perform this surgery and the religious clerics who prescribe it as a treatment for what they perceive as a kind of illness. The surgery itself is graphically described as difficult and incredibly painful, with the surgeon outlining in detail exactly what it entails. Surprisingly, the discourse produced by the government has produced an argument framed not around religiosity and piety, but a kind of calculating rationale of pathology and antidote, sickness and cure. By eschewing talk of spirituality in favor of so-called “modern” scientific methods, the clerics and the doctors make the position of the young men seeking this surgery seem especially vulnerable.

The strength of Eshaghian’s film lies in her ability to approach the subject with compassion but also with a critical distance. Her account of the current situation regarding sexual reassignment surgery in Iran is posed from a complex stance in which this procedure is not uniquely Islamic or even religious, but rather stems from a larger history of medical sciences and constructions of homosexuality and gender “confusion” as pathology. (This isn’t so different from the American medical establishment’s take on sexuality: it was as late as 1994 that the Diagnostic and Statistical Manual of Mental Disorders [DSM VI], the reference book most often used by psychiatric professionals around the world, described “Gender Identity Disorder”—a term adapted from transsexual or transgender—as a mental illness.) While the filmmaker is implicitly critical of the drastic sexual reassignment surgeries condoned by the Iranian state, she is clearly hesitant to portray this as a solely Iranian issue.

Much of Eshaghian’s film’s persuasive power comes from her reluctance to play into popular U.S. discourses that usurp stories of social inequality in Iran to justify our antagonism, or even military action, toward them. Stories of women’s inequality are all too often used to stoke the fires of war, to encourage an already inundated and fearful population to believe that the Middle East is a region intrinsically hostile to freedom, in all vagueness. It would have been far too easy to produce another horror show (like 2002’s Osama, which fictionalized the hellishness of life under the Taliban) to justify military intervention to any kind of faceless, suffering population. The rhetoric behind many recent films and books about the Middle East has been condescending at best, racist and hateful at worst. With Be Like Others, Eshagian bucks the trend, taking a more thoughtful and subtle approach to her subjects and showing their decision-making process as appropriately complicated. And through this nuanced approach to critique, a condemnation of forced sexual reassignment surgery emerges.

At the same time, it’s thanks to her skill as a filmmaker that she illuminates how it’s not merely religiosity or piety that produces this procedure but also the use of technology and a calculated reinterpretation of science and medicine. She doesn’t present Iran as atemporal, outside of history, or hopelessly archaic. Rather, Be Like Others is a glimpse at a kind of modernity that polices the boundaries of normality and abnormality with all the tools that modern medicine provides. Be Like Others is at least as much a chilling portrait of the possibilities of science, taken to an extreme, in a nation’s quest for producing normality and uniformity in its citizens, as it is a statement on Iran’s stance towards sexuality and gender.