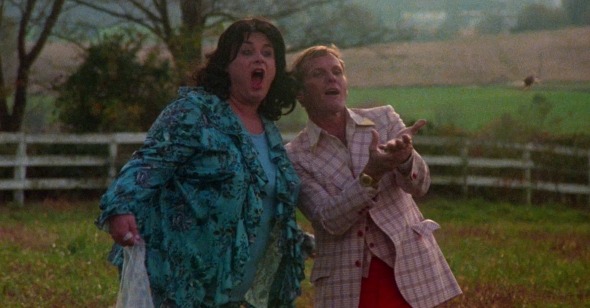 Polyester (1981) was the first John Waters film of the eighties, and it has an unmistakably different vibe from his earlier films. Waters and his muse, Divine, had not worked together since her tour de force performance as Dawn Davenport in 1974’s Female Trouble, and with Polyester, the Waters-Divine collaboration feels less content to ride on pure shock value. Instead, they are stretching their artistry and deepening their approach to performance with a devilish wink. Polyester is on its surface a cocktail of pop culture artifacts where the cross-gender drag casting of Divine as Francine Fishpaw becomes less of a punkish transgression than an homage to the tradition of the “women’s picture” melodramas of the 1950s—with the added stunt of Odorama scent, achieved with scratch-and-sniff cards. While Polyester is an undeniable transition film for Waters, which feels informed by the changing standards of Hollywood and the world around him, it’s also very much the work of a prankster.

Divine and Waters were both in their mid-thirties at the time of Polyester’s making, and the brash, abrasiveness of Pink Flamingos, Multiple Maniacs, and Female Trouble, produced when they were in their twenties, cannot be duplicated, either in terms of tone or the intensive labor necessitated by their DIY budgets. Waters was burned out from those productions. They had made headlines for their profanity and bad taste, but he began to fear that these career-defining works would just continually push him into an artistic corner. Divine felt similarly, as she was still seen as “the drag queen who ate shit” in Pink Flamingos, and her Studio 54 period of disco hits had a short mainstream shelf life due to a disco backlash that was fueled by a strong undercurrent of anti-black and anti-gay attitudes. But Waters was soon given the opportunity to shoot on 35mm with a sizable budget through New Line Cinema, which had moved from distribution (as it had for all Waters’s films up to that point) into production. During this brief historical window, Hollywood was still open for business for certain outsiders like Waters, who had already established his name in independent film infamy.

The title Polyester, for Waters, conjured something that was anti-nostalgia. It was a material Waters believed nobody actually wanted or liked but nevertheless had, something cheaply nouveau riche disguised as suburban decadence, from furniture to sleazy leisure suits worn by divorcees. Waters dropped his film into the Baltimore suburbs, surveying the ugliness and low culture of mainstream American living.

Polyester still reads as counterprogramming to trends of American cinema both small and large. The narrative of 1970s Hollywood has been simplified into the New American cinema of mavericks like Cassavetes, Altman, and co., allegedly killed off by a mix of Jaws, Star Wars, and the widely perceived hubris of 1980’s Heaven’s Gate. But there were also emerging films and television shows fueled by Baby Boomer sentimentality of the not-so recent past. There were legitimate classics, like American Graffiti, The Wanderers, and Cooley High, which nodded to sentimentality and cultural memory of a time and place, but there was also the empty-calorie patina kitsch of the more commercially viable Grease (which Waters would outdo in his ’50s greaser spoof Cry-Baby) and the television show Happy Days. These permeated the culture in an unignorable way and were insidious in their “harmless” presentation, which was revisionist and whitewashing of the time periods they re-created. And beyond the cinema, jukeboxes and checker-tiled diners were even seeing a revival. There was an undeniable moment of the 1950s reentering the cultural sphere in the late 1970s and ushering in the 1980s, a decade marked by a reactionary urge to duplicate 1950s conformity in the face of women’s liberation, gay liberation, black liberation, sexual liberation, and high divorce rates, with its avatar being the newly elected American president.

One cannot describe the domestic political dynamics of the Reagan era without invoking nostalgia-fueled campaign slogans like “Let’s Make America Great Again,” a sentiment that married social and economic conservatism to the provincial American myth that the past was preferable than the present. Reagan, of course, first made his name as an actor, but his Hollywood-to-the-White-House arc’s significant moment was when he served as “friendly witness” to HUAC as Screen Actors Guild President. Reagan’s ex-wife, Jane Wyman, would become a more famous screen idol than him, and is best remembered for her performances in Douglas Sirk’s 1950s melodramas when she was nearing 40, playing aging matriarchs whose interiority and romantic pursuits are centered in the narratives. It was Wyman, Divine’s idol Elizabeth Taylor, and other Sirkian heroines, along with certain stars of international cinema (including Fassbinder staple Brigitte Mira), who would conjure the template for Polyester’s Francine Fishpaw.

Francine is holding on for dear life as her nuclear family falls into disarray with a cheating porno theater-owning husband, a fetishistic teenage son who gains local notoriety for stomping on feet, and a rebellious daughter with an unplanned pregnancy. Francine is unloved, ignored, and routinely humiliated. Divine playing the punching bag is the biggest script flip from any of Waters’s previous films, as is the fact that she looks so very ordinary, often dressed in cheap caftans, girdles, and robes. In many ways she is the docile “Good Christian woman,” who stands by her man and seeks to conform to the ways of the world. Francine is taken for granted by those around her and is left with not much to believe in. Women’s liberation of the 1970s passed Francine by. While Polyester introduces an awakening of Francine’s agency, this is still a cynical comedy about an American housewife and not Francine Fishpaw, 538 Wyman Way, 1080 Baltimore.

Francine’s potential suitor is sportscar-driving Todd Tomorrow, played by aging blonde matinee idol Tab Hunter. The actor did not officially come out as gay until many years after Polyester’s release, but his willingness to lampoon himself, singing the Debbie Harry-Chris Stein penned title song, and playing a drag queen’s lover gestured towards a coming out as much as was possible. Add the metatextual quality of Hunter filling the Rock Hudson role—another screen icon whose sexuality would be hidden through his career, only outed in his death in 1985 from AIDS—and there is a lot to mine through this casting. Hunter’s Tomorrow is ultimately not a savior for Francine, and Waters remains circumspect about the straight world’s conditioned attitudes—and of these types of movies, in which a woman of a certain age can ever escape her station. The only consistent lifeline to Francine is Edith Massey’s Cuddles Kovinsky, Francine’s gal pal, confidante, and former housekeeper, who assumes the Agnes Moorehead role with effective charm and warmth, and who still visits her friend and previous employer even after reaping the benefits of an inheritance.

The Odorama cards handed out to viewers of Polyester are a lasting hallmark of the film: a gimmick that pays tribute to Waters’s idol William Castle and also recalls the ’50s milieu. Sirk’s and Castle’s films were both commercially successful in their time, theatrical outlets for those who desired to get away from the cultural domination of television. They were also each targets of mockery. While Sirk’s films were often nominated for Oscars (including Dorothy Malone’s win for Written on the Wind), they were often derided by critics who were turned off to melodramas, and Castle’s gimmickry earned him comparisons to a carnival barker. While Sirk and Castle would never collaborate, there is an intersection between Sirk’s films and Castle’s 1960s work, in which he often employed actresses of a certain age in “psycho-biddy” B-movies—women who in prior decades starred in hit melodramas (Joan Crawford, Barbara Stanwyck), but would later be seen on television soap operas.

Divine is no “psycho-biddy” in Polyester, showing a more disciplined, mature side as an actor. She is still theatrical and histrionic, but well within reason as a put-upon wife regularly unseen by those around her until it becomes a matter of life and death. Polyester is a farce, but it is the necessary bridge to mainstream viability for the director and star: in 1988’s PG-13 Hairspray, Waters cast Divine in the even more kitchen-sink, domestic, strait-laced supporting role as Tracy Turnblad’s mother. Waters would further subvert suburban nostalgia with Cry-Baby and Serial Mom after Divine’s death in 1988, but she has proven to be an irreplaceable element in Waters’s work. Polyester is a testament to how Waters and Divine, two of the most nonconformist figures in American film history, could prove their maturation as artists without selling out their essences as provocateurs.