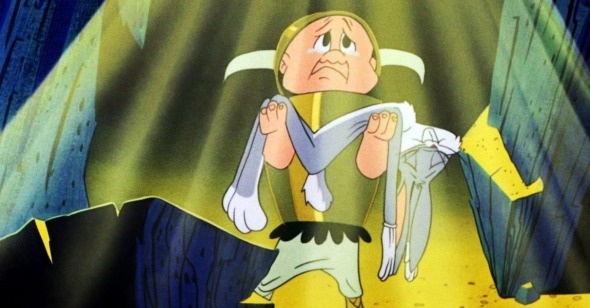 The program Classic Cartoons by Chuck Jones plays at Museum of the Moving Image on 35mm Saturday, January 22 and Friday, January 28.

In his book Chuck Amuck, animator Chuck Jones laid out why the major Looney Tunes characters, and especially Bugs Bunny, worked so well comedically. “Comedy is nearly always the stuff of the ordinary,” Jones wrote, “concerning itself with simple matters and simple ambitions, with ordinary pursuits and ordinary ambitions.” Jones saw his characters in the lineage of comedians ranging from Charlie Chaplin’s Little Tramp to Jack Benny, observing that the needs expressed by these performers in their comedy would also apply to his animated characters. It often came down to these simple desires and pursuits that would then take on something more existential, or as Jones put it, “... the eternal battle to find rationality within the establishment.” But perhaps one of Bugs Bunny’s greatest attributes is that he transcends the rational to become one of Hollywood entertainment’s greatest anti-establishment heroes.

Among Jones’s principles for Bugs Bunny was that his entrance would often start in a pretty unremarkable and simple place, such as a rabbit hole, a forest, a desert, or a meadow. Then somebody comes along to disrupt that peace. It is Bugs’ resistance and reaction that provides the framework for many of his shorts. This resistance took on many forms, among them a kind of gender-play that was a rather frequent occurrence. Bugs Bunny’s drag has always been a central component, not just as comedy but also as a survival tool within the many feuds and confrontations across his shorts. Everyone from RuPaul to the trans scholar Susan Stryker has cited Bugs Bunny in drag as notable for the unlikely fact that drag is not the central joke. Rather, here, the character has the audience rooting for his tenacity and imagination to succeed in situations where he would in other cases be cast as a villain or worse—the butt of the joke. When Bugs Bunny’s 80th “birthday” was commemorated with United States Post Office stamps in 2020, Bugs—from his Merrie Melodies shorts to Space Jam—was highlighted, including not one but two stamps of Bugs in female drag, one as a mermaid in Bob Clampett’s Hare Ribbin’ (1944) and the other as Valkyrie Brunnhilde in What’s Opera Doc?, the 1957 Chuck Jones masterpiece.

What’s Opera, Doc? is arguably among the best known and celebrated Looney Tunes shorts and Jones’s finest achievement. As with many of the greatest Looney Tunes offerings, it becomes a gateway to a different art form that, while faithful to that form (in this case the grandiose majesty of Wagnerian operas), still pulsates with the Looney Tunes formula. What’s Opera, Doc? has longtime Bugs Bunny adversary Elmer Fudd assume the form of the Viking demigod Siegfried, who brings the wrath of thunder and lightning storms in addition to his constant bloodlust to “kill the wabbit.” Bugs comes up from his hole and though he plays along and sings with Siegfried, he realizes his life is in peril, and a chase soon begins. Bugs outruns Siegfried but must think quickly. Siegfried then sees his vision of the damsel Brunnhilde—Bugs in drag—on a white horse.

As Brunnhilde, Bugs uses femininity as a safety valve, flirting with and enticing Elmer’s Siegfried. It is noteworthy that Jones never has Bugs break from this gender performance while dressed as Brunnhilde. A major trademark of Bugs Bunny involves regularly breaking the fourth wall with wisecracks and musings to the audience, but this never happens when he is in drag. Jones is also playing with the historical conventions around opera, which included cross-gender casting of men in women's roles and vice versa. In performing a ballet that itself becomes another version of a chase, Bugs once more becomes an unattainable object for his adversary—until Bugs submits to Siegfried’s advances and the helmet and wig come off, revealing his true identity. Exploding in anger, Siegfried seeks revenge in conjuring treacherous weather conditions to strike down the rabbit who embarrassed him, only to find the limp body of Bugs Bunny. First comes farce, then comes tragedy, or so Siegfried thinks. A heartbroken Siegfried carries the love interest whom he believes he destroyed. No longer Brunnhilde, Bugs breaks the fourth wall and preemptively answers the looming question from the audience for this relatively dark ending: “Well, what did you expect from an opera? A happy ending?” Even with the sense of raised stakes and more histrionics than your average Looney Tunes short, Jones never loses sight of what makes Bugs always the comic hero in the end, whether playing dead or inhabiting queered identities.

Rabbit Seasoning (1952) is another significant Jones short that centers on Bugs Bunny cross-dressing as survival tactic. The second short of “The Hunting Trilogy” (including also Rabbit Fire [1951] and Duck! Rabbit, Duck! [1952]) features the usual game of hide and seek between Elmer Fudd and Bugs but also features Bugs’ frenemy Daffy Duck setting up every possible scenario to lead Elmer Fudd to Bugs to try and deflect the hunter’s attention from himself. Jones would group Daffy into the category of Fudd, Wile E. Coyote, Yosemite Sam, and other real-life comedians, performers noted more for their public errors than triumphs; to Jones, they “help compensate for or at least make understandable our own private mistakes.” They serve as mirrors of the audience, even as we would all like to be Bugs Bunny. But as shown in these shorts, a character like Daffy takes things into the realm of meanness, envy, jealousy, and in this case, traitorousness.

Daffy exasperatedly tries to direct the hapless Elmer Fudd in hunting Bugs, to the point he has to give a pep talk and, in a grand case of miscalculation, orders Fudd to shoot him as he thinks the hunter is not up to task—which ends badly. Daffy wants all the characters to strictly adhere to the rules of “rabbit season,” which is again for his self-preservation. His plan fails but Bugs is not safe either; Daffy now moves to his side as he realizes he cannot escape being prey. In his rabbit hole, Bugs asks Daffy to be a decoy. Daffy collapses from the prior shooting. Bugs then picks up a pink angora sweater and addresses the audience, “Like they say, never send a duck to do a rabbit’s job!” as he puts on his drag, which is conveniently at the ready. He’s certainly done this before.

In a Lana Turner blonde wig, red high heels, and a blue skirt to go with the sweater, Bugs transforms into a desirous woman, which includes a put-on voice. Daffy can only be a baffled witness. “Surely you’re not going to be taken in by that old gag?!” he probes Elmer, who doesn’t see what’s right in front of him. Daffy rips off Bugs’ clothing in an attempt to expose him. This is of course more lighthearted than violent (after all, in this short, Daffy’s beak gets detached several times from being shot and always ends back in the right place). But his competitive malice toward Bugs hits a fever pitch, even if ultimately Bugs gets the last laugh. He fools Daffy into going home with Elmer. It works and perfectly encapsulates the two characters for Jones: “Bugs Bunny is simply, and only, trying to remain alive in a world of predators,” while Daffy Duck “...is simply only trying to get ahead.”

Jones considered Rabbit Seasoning the best showcase of how Daffy “gallantly and publicly represents all the character traits the rest of us try to keep subdued.” The inherent flaw in Daffy’s psychology often leads to him being the butt of the joke whereas Bugs’ philosophy—which can include being in drag, carrying on as a woman, a love interest, a seductress—involves him playing along with others as a means to an end: living on for another day, or perhaps another short.

Bugs Bunny was Jones’s ultimate comic hero, who he himself would like to be, which was for Jones a kind of “male Dorothy Parkerish D’Artagnan.” That Bugs’ wit, quick thinking, and fast comebacks regularly included wearing women’s clothing is not treated as some transgression of moral codes, and that has always felt significant. Bugs Bunny will always be an avatar for those for whom, when push comes to shove, have to operate against authority to keep themselves alive by any means necessary.