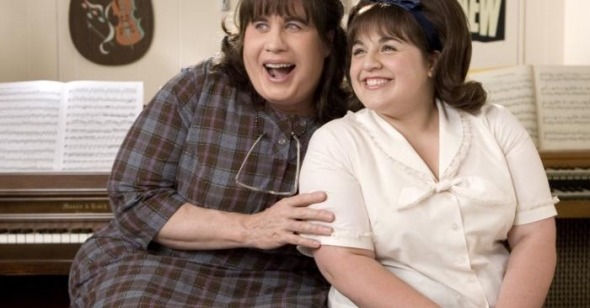 Travolta Goes to Camp
Leo Goldsmith on Hairspray vs. Hairspray

Unlike in John Waters’s 1988 film Hairspray, no one throws up in Adam Shankman’s 2007 musical movie version, though there may be a few reasons to do so while watching it. Chief among these is John Travolta, cast in its most indelible, if not its principal role, the part of early Sixties housewife and laundress Edna Turnblad. Originated in John Waters’s iteration by drag icon Divine, reprised in the Broadway adaptation by outspoken gay celebrity and playwright Harvey Fierstein, the role of Edna would now be filled—amply, if artificially—by a fat-suited (yet, as it turns out, weirdly mousy) John Travolta.

Of course, Travolta’s place in the modern movie musical is itself undeniably iconic, even if it has in the past occasioned nut-hugging denim more often than it has plus-size housedresses. His playing a character in drag, then, is more equivocal, proving in many ways appalling, in many ways startlingly apt. On the one hand we have a major proponent of the Church of Scientology, long rumored to practice “conversion” therapy for homosexuals (through large doses of vitamins, no doubt); on the other an actor himself often whispered to be one such sexual convert, whose sexuality and marriage have been doubted or downright sniffed at by lawsuits and TMZ, mincing and shimmying desperately in a fat suit and bangs, and cuddling with Christopher Walken.

Where’s the gag—onscreen or in the back of the throat? Some remained decidedly unamused, and Washington Blade editor Kevin Naff even attempted to instigate a boycott of the film. But most others either enjoyed the irony or simply didn’t care. Shankman and John Waters (a producer of the remake) naturally rushed to Travolta’s defense—he was, after all, starring in a movie made largely by gay filmmakers, Shankman and Waters included. A well-timed puff-piece in the New York Times promptly put all matters to rest: Travolta was a professional, a friend of the gay community, and Jersey housewives could safely giggle and swoon at the sight of the actor shaking his hips and waddling his gusset.

Like the original, Shankman’s version mines the setting of Baltimore in the early 1960s for reasons at once nostalgic and even somewhat noble. Both films are at least to some degree white-centered burlesques of the African-American civil rights movement as played out on television, specifically on “The Corny Collins Show,” a fictional Baltimore-based teen dance program (based on the actual “Buddy Deane Show”), which slowly and in spite of much obstinacy from management, feels the righteous and inevitable pull of racial integration. Like Waters’s original, Shankman’s film posits, in broad strokes, an opposition between the good-natured outsiders of Charm City, USA— Edna Turnblad, her hair-hopping, dance-crazed daughter Tracy, and an assortment of likeable black and white characters—and those few stuffy segregationist conservatives— like rival dancer Amber Von Tussle and her mother, Velma—who would keep the show’s Negro Day safely separate from regular programming.

With such political lineage, especially from gay filmmakers (in the late 1980s, and then again in the late 2000s), it’s not difficult to draw connections between the civil rights movement of the sixties and the movement for gay rights and acceptance in contemporary American culture. After all, both films stridently proclaim the triumph of all manner of downtrodden outsiders, as the fat, but indefatigable heroine Tracy Turnblad demonstrates, in both films, by becoming “the height of teen fashion.” But curiously, while Waters’s oeuvre is built upon the cheap, tasteless, and repulsive, it is Shankman’s film that proves itself the most indigestible in this regard. (This is not simply, as one friend of mine cannily put it, because Ricki Lake is fat in a cute way and Nikki Blonsky is not—though the latter’s utter charmlessness is indeed more appropriate to a high school musical than a feature film). This is a result of the film’s utter lack of sincerity, its desperation to please everyone, and its willingness to replace political urgency with Broadway/Hollywood spectacle.

While there is much that is immediately suspicious about Shankman’s film—like its mindless and un-ironic inclusion of contemporary teen idols like Zac Efron and Brittany Snow—Travolta’s taking on the Edna role is only the most obvious indication of its inherent fatuousness. Whether unconscionable sacrilege or hyper-self-conscious camp, his appearance is nonetheless transparent image-management of the most calculating and least entertaining variety. Queasier even than his appallingly fake Bal’more accent is his apparent effort to, in a way, demystify his sexuality by making it more mystifying—in essence, to de-queer himself by making himself queerer. If it weren’t so cynical, it would seem a bold maneuver, inoculating himself against accusations of homosexuality by embracing its semblance. It is as though Travolta’s fat suit—with its pudgy, rubbery cheeks and bulbous, bandy legs—functions as a kind of thick, blubbery beard for the actor’s own heterosexuality. Or perhaps, more subtly still, it is a double beard for his homosexuality, thus dispelling any mystery about his sexuality by making it even more confusing. After all, any man married to Christopher Walken could not possibly be gay. So, the quandary has been solved, right?

But what becomes distinctly clear after watching the actor’s grotesque, lumbering turn is that Travolta is no Harris Glenn Milstead, the Towson-born actor who played Divine (and various other incarnations) in eight films by John Waters, his high school classmate. This is not only because Travolta would never crush his own mother under a Christmas tree for failing to buy him cha-cha heels, as Divine does with righteous indignation in Female Trouble, but also because Travolta is not actually obese. This seems at once obvious and coldly superficial, certainly, but this small conceit, continually reinforced with broad and winking fat jokes ("Is that braised?"), is nonetheless at the heart of what is so maddeningly distasteful about Shankman’s remake, and also suggests what’s so brilliant about Waters’s original film.

For all their theatricality and pomp Waters’s films—perhaps the most essential, certainly the most self-conscious examples of what camp itself means in cinema—are authentic: they derive their power not from theatricality alone, but from its brutish altercations with the real world. This is nowhere more deeply felt than in Pink Flamingos when an actor lip-synchs to the Del-Tinos’ "Pa Pa Ooh Mau Mau" with his asshole, but even in the comparatively tame and commercial Hairspray, Waters’s mainstream breakout, the audience is confronted with reality, awkward and overweight, difficult and deeply unpleasant. And also deeply funny: the actions of Prudence Pingleton, following her venturesome daughter into a black neighborhood, anxiously clutching her purse, and running in terror from a black policeman, represent racism at its most hilariously overblown. To be sure, Waters’s is a playful and malleable reality, injected not with rabies, as in Desperate Living, but with theatrical excess of the most puerile and perverse variety. But Waters’s trick is to provoke with truth—real cooked rats, real dead dogs, real live chickens—and he makes his point with the shock of cold, splotchy, and very human nature.

This commitment to confrontation also extends to the politics of Waters’s films: In all of them, even in the relatively tame Hairspray, the filmmaker’s slogan may as well be “get used to it.” He coerces his audience into an interaction with the perverse, but always joyously. The shock Waters’s cinema offers, then, is not transcendent, but almost reflexive, implicating the viewer in the awkward complexities of his own humanity and forcing him to either celebrate it or run screaming away. This is, after all, why Waters is so particular about Baltimore; why, for example, he staged Lady Divine’s Cavalcade of Perversions in Multiple Maniacs on the lawn of his parents’ pleasant suburban home.

The most obvious gap in Shankman’s slick, hermetic, and soundstage-bound film is Baltimore itself, the grim, socially bifurcated city that serves as a very real environment for Waters’s satires of repulsion. As if to mark this gap, Shankman opens his film with an impressive CGI skyline of an ersatz Baltimore and the Broadway show’s opening number devoted to the same, one of many such horrifically bland songs that the otherwise able Marc Shaiman penned to replace the classics of early Sixties soul music in Waters’s film. The parallel substitution of actual Sixties dance-moves (so lovingly recreated in the original) with typical Broadway human clockwork, a famous Hollywood actor in a fat suit, the evacuation of Baltimore itself as a city of local and historical specificity—if nothing else, these omissions and substitutions are signs of Shankman’s lack of sincerity, a disinterest in history and place, and a preference of latex rubber over the unpleasantries of human physicality.

Waters aggressively puts forward gay culture into urban Baltimore, and while this is risky, or even problematic—suggesting an alignment of homosexuality with deep depravity, licentiousness, and general bitchiness—it nonetheless demonstrates a temerity worthy of Hairspray‘s historical subject, the civil rights movement of the early 60s. Perhaps this kind of political strategy is too blunt or outdated for Shankman’s taste; he is more interested in smuggling gay outsider culture (or its dim, refracted imprint) into—of all things—an old-fashioned Hollywood-Broadway musical. Both versions purport to be about outsiders, to be sure—Blonsky’s Tracy convinces Travolta’s curiously timid Edna, "their time is coming"—but each has its own notion of what an outsider actually is. Shankman’s vision is a detention classroom full of dancing black teenagers; Waters’s is a gaggle of dorks and misfits in Special Ed. Shankman’s desegregation protest is solemn, funereal, and straight out of dozens of other civil rights movies; Waters’s a handbags-and-firehoses brawl at an amusement park appropriately dubbed Tilted Acres.

Each filmmaker’s political vision reflects that of his generation: the elder had to scream and offend to keep from being buried entirely. Perhaps the situation of Shankman’s generation of queer filmmakers demands a more ingratiating, more normalizing, less degenerate approach than Waters’s. But his crassly theatrical attenuation of Hairspray only draws gay culture away from a moment of American history with which it ought to have a great deal in common. Instead, the notion of civil rights in Shankman’s film remains buried under sequins, angora, and foam blubber.