Connected: What‚Äôs Up Doc? /The Plague of the Zombies As we move into an unprecedented time, here at Reverse Shot we aim to continue writing about and connecting through film, even in what will likely need to be a limited capacity. In this new weekly column, Connected, one writer will send another a new piece of writing about a film they have been watching and pondering over, in the hopes that this will prompt a connection‚ÄĒemotional, thematic, historical, or analytical‚ÄĒto a different film the other has been watching or is inspired to rewatch. This ongoing column will be in the spirit of many past Reverse Shot symposiums, in which writers found connections between seemingly disparate cinematic works, and it will also help us maintain personal connection among our writers and our readers at this uncertain moment.

During all this social chaos, I‚Äôve found that I need structure‚ÄĒand within that structure I need a little chaos. For the purposes of this article, I‚Äôm talking about movies, of course, as my husband and I have tried to structure and habituate our movie-watching routines as strictly as possible, making daily schedules of what we watch and when, with each night a pre-decided genre or viewing platform. In employing these sanity-keeping measures, I‚Äôve found the most purely enjoyable film so far‚ÄĒone that provided an actual sense of momentary escape‚ÄĒto be one defined by comic anarchy, a long-time-coming re-viewing of Peter Bogdanovich‚Äôs wild 1972 comedy What‚Äôs Up, Doc? As the title promises, there‚Äôs a Looney Tunes quality to the film, but it‚Äôs not merely that its living, breathing humans behave like characters in an animated slapstick, it‚Äôs that their world is informed by cartoon logic. And in using cartoon logic for a romantic comedy‚ÄĒcombining the basic screwball premise of Howard Hawks‚Äôs Bringing Up Baby with the zany anarchy of a Warner Bros. Merrie Melodies short‚ÄĒBogdanovich all but explodes the form‚Äôs sexual undercurrents, essentially casting Barbra Streisand as Bugs Bunny and Ryan O‚ÄôNeal as Elmer Fudd, with the former‚Äôs pursuit and antagonizing of the latter more explicitly fueled by the rules of attraction.

It was a daring, technically and financially risky follow-up to The Last Picture Show (1971), the film that had made Bogdanovich Hollywood royalty. The director claims to have turned down The Godfather to make What‚Äôs Up, Doc? instead, a decision some might call laughable‚ÄĒwhich it is, in the best way. It‚Äôs also an admirable choice, a fitfully off-trend passion project that, given the trajectory of so much of Bogdanovich‚Äôs oeuvre, speaks to the lively, idiosyncratic taste of a director who would cut an entirely different swathe through the hallowed seventies American cinema with such movie-besotted pastiches as At Long Last Love (1975) and Nickelodeon (1976), and who would later return to dexterous physical comedy with a snappy screen adaptation of Noises Off (1992). The hard-won effervescence necessary to keep such projects afloat may not have been equally present in all these films, but in this ambitious first attempt, he was almost supernaturally accomplished.

What‚Äôs Up, Doc?, which nests an improbable love story within an absurdly crisscrossing crime-story plot involving the confusion of four identical suitcases passed amongst the guests of one San Francisco hotel, boasts an intricate design and clockwork-precision in its slapstick. Yet its success is also clearly reliant on the chemistry and commitment of its two stars, who throw themselves into their roles with uncommon aplomb, and whose youthful beauty and frisky erotic charge is the film‚Äôs most compelling animating force. Following her emergence into musical movie superstardom in the late sixties, Streisand had become one of American cinema‚Äôs top box-office attractions, and What‚Äôs Up, Doc?, perhaps next only to her Oscar-winning role in Funny Girl, best shows why, putting her wily charms and frankly independent persona on constant display.

Streisand‚Äôs mysterious Judy Maxwell is a single-minded force, an agent of destruction who brings chaos everywhere she goes‚ÄĒas is clear from the opening scenes, in which by merely crossing busy city streets she causes traffic smash-ups. If she‚Äôs a riff on Bringing Up Baby‚Äôs Susan Vance, the quintessential Katharine Hepburn role, then Ryan O‚ÄôNeal‚Äôs Howard Bannister, a nerdy musicologist obsessed with the tonal qualities of igneous rocks, is clearly a variation on Cary Grant‚Äôs straight-laced paleontologist from that film as well. O‚ÄôNeal‚ÄĒalso one of the movies‚Äô top stars, following the enormous success of Love Story‚ÄĒmay not have a patch on Grant‚Äôs legendary charms, but the bespectacled blond‚Äôs Greek-God-goes-geek-clod act is an amusing Clark Kent-ification, and never does one doubt why Streisand‚Äôs free spirit would be so voraciously driven to loosen him up after meeting him cute in the hotel‚Äôs pharmacy. When she first takes him by surprise, she‚Äôs munching a carrot lasciviously and adorably, Bugs Bunny‚Äôs preferred vegetable of choice transformed into a tool of phallic possibility.

From this suggestive opening, things only get more direct and disorderly, moving from a series of mistaken identities to the balls-to-the-wall insanity of its slapstick mega-climax, turning Bullitt‚Äôs streets-of-San-Francisco car chase into an ever-escalating symphony of Buster Keaton-esque comedy choreography. Bogdanovich called it ‚Äúthe most fun of any picture I‚Äôve made‚ÄĚ and ‚Äúabsolute heaven from beginning to end.‚ÄĚ This is miraculous considering the evident elbow grease necessary to get it made: ‚ÄúWe took over San Francisco and wrecked a couple of streets and got in a lot of trouble.‚ÄĚ With the risk-averse, green-screen products that define Hollywood today, this kind of physical expenditure is like a transmission from another world. The unruliness of What‚Äôs Up, Doc? is more than a tonic right now: for me, it felt like a way to make fitting nonsense of a world for which common sense just doesn‚Äôt cut it anymore. And while these kinds of movies-as-traffic-jams haven‚Äôt always been my go-to comfort, it‚Äôs inspired me to continue seeking out cinematic riots. ‚ÄĒMichael Koresky

The Plague of the Zombies

Hearing about your plans to structure your viewing (was that just last week, in the afternoon, standing six feet apart at Grand Army Plaza‚Ä¶? It already seems a year ago) inspired a similar impulse in my own home, though here things have taken a slightly different direction. We‚Äôve thrown a list of two hundred or so titles drawn from our DVD collection, DVR, and various streaming services into an excel document and added a randomizer function. So, every time we open the sheet, the software tells us what we‚Äôre watching. It‚Äôs been frankly revolutionary‚ÄĒwe‚Äôve completely eliminated those numbing hours spent scrolling infinitely on one site or another, debating the kind of film we do or do not ‚Äúfeel like‚ÄĚ (usually the correct answer is: anything under eighty minutes), before switching off and turning in early. This has become our own form of structured chaos.

It‚Äôs curious that you‚Äôve sent me something on What‚Äôs Up, Doc?, because last weekend our randomizer sent us to the Criterion Channel for Bogdanovich‚Äôs first film, Targets, which neither of us had ever seen. I nearly began writing a response to you on that film‚ÄĒit would have been such a sympatico pairing‚ÄĒbut as I hunkered down, I got stuck on your twinned references to logic tucked in your first paragraph. The idea of logic, of course, comes to us from the Greeks. (This concept doesn‚Äôt get its own episode in The Owl‚Äôs Legacy, the Chris Marker series I wrote about here last week, but there is one dedicated to logomachy, an activation of logos, the base for logic, that can be translated in various ways related to rhetoric, reason, speech, and discourse.) I guess the reason why your use of that word stuck with me and sent me in another direction is simple: a solid sensical base undergirding just about anything seems in pretty short supply at the moment.

Last night, the randomizer compelled us to cue up the 1966 Hammer Film production The Plague of the Zombies, directed by John Gilling. Perhaps in this moment we might have avoided a movie that calls out an infectious disease in its title, but diving into the familiar environs of a period horror from that era was as warm and comforting as sliding on a beloved slipper. Even if you haven‚Äôt seen this film, you‚Äôve seen something like it: a remote English village populated by superstitious working-class folk, a mysterious malady that‚Äôs led more than a few residents to their recent doom, an entreaty to the outside world for help, an upper-crust intellectual figure arriving on the scene ready to bring his science to bear only to have his values challenged, a damsel or two in distress.

In Gilling‚Äôs film, the issue disrupting village life is the voodoo practiced with some regularity, and to obscure ends, by the village squire, Clive Hamilton (John Carson), who spent time abroad in Haiti (curiously pronounced high-eight-tea here) and is viewed in the film‚Äôs opening scene masked and performing some horrid rite while a group of shirtless, wild-eyed black men pound away on tribal drums. (These men will turn up later as Hamilton‚Äôs waist-coated servants, thus either furthering some sort of murky colonialist critique or extending the film‚Äôs more problematic impulses‚ÄĒtough to say.) Intercut with this frenzy are images of a young woman writhing in bed, repeating the words of the mysterious ceremony as blood leaks from her wrist. In the next scene, a letter arrives at the genteel home of eminent physician Sir James Forbes (Andr√© Morell), detailing the mysterious happenings over in Cornwall. It‚Äôs delivered by his daughter Sylvia (Diane Clare), who, bored stiff at home and keen for adventure, pushes her father to forestall his fishing vacation and head to the field to investigate.

The pair‚Äôs arrival in the quaint town (an elegantly appointed bit of production design shared with another Gilling-directed Hammer film of the same vintage, The Reptile) is immediately marred by the overturning of a casket marched through town by a group of young thugs back from a foxhunt. Shock cut to the young corpse‚Äôs face contorted in agony. Sylvia‚Äôs friend Alice (Jacqueline Pearce), the woman affected by the ritual at the film‚Äôs opening, has married Forbes‚Äôs prize student, Peter (Brook Williams‚ÄĒthe author of the letter), the town doctor; she seems wan and distracted, and prone to rushing off in the gloomy (day for) night. Forbes is immediately intrigued by what he sees, and his regal bearing affords him some some sway over the recalcitrant townsfolk. After a night spent grave-digging to source a fresh corpse for an autopsy turns up an empty coffin (and an actually quite hilarious surprise reverse shot), Forbes begins to piece together a theory for the events at the hand.

It‚Äôs somewhat worse than he imagines: what is ultimately driving the mysterious deaths in the town is the lord of all evils, greed. Hamilton has learned a method of zombifying the locals, disinterring their bodies and employing them to excavate the long defunct, allegedly haunted local tin mine to which he owns the lease. If the intermittently credible, haphazardly deployed effects of the film‚Äôs finale, in which the zombies, enveloped in flames and smoke, somewhat punctures the oneiric spell conjured by what‚Äôs preceded it, the hokeyness of a bunch of blokes done up in grey corpse paint and masks stumbling about a foamed polystyrene cavern pretending to be on fire manages to warm the heart. The Plague of the Zombies is what it‚Äôs supposed to be: an often engrossing, unevenly performed and written horror cheapie that strives mightily to cover over its seams and never altogether succeeds in this goal and, oh, thank goodness for that. It‚Äôs as if our randomizer knew exactly what we needed to see right now: a picture in which everything, no matter how batty, just makes perfect sense. ‚ÄĒJeff Reichert 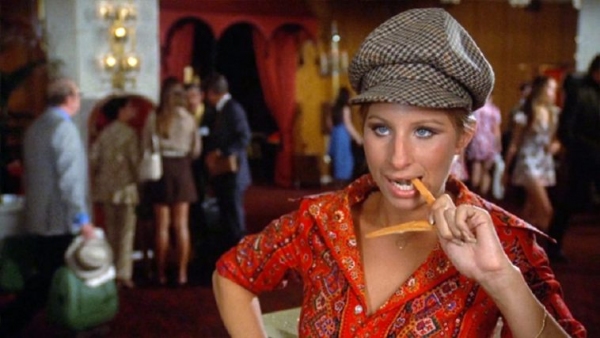