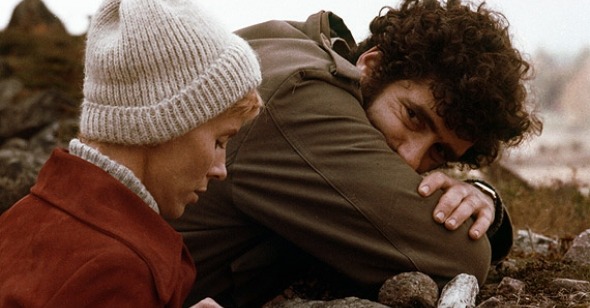 In November 1971, Ingmar Bergman married his fifth—and final—wife, Ingrid Karlebo, to whom he would stay married until her death in 1995. Released only a few months earlier, The Touch, with its themes of infidelity and stifling bourgeois domesticity, seems a strange way to mark the occasion, but then surely the new Mrs. Bergman must have had a good idea of what she was getting herself into. Less could be said for Bergman himself on that particular film, which found him working outside of his usual discomfort zone in more ways than one.

The Touch remains a notoriously tricky film in Bergman’s sizeable filmography, even if its deviations from the director’s remarkably consistent body of work at first seem only superficial. The story of a middle-class housewife who embarks on a prolonged and obsessive affair with an emotionally troubled archaeologist visiting from America, the film was his first venture into English-language cinema, backed by a bunch of yanks from a film-production arm of ABC Television, but aside from the casting of American actor Elliott Gould, there are few other notable personnel changes. Bergman, still in the midst of his precipitous one-film-per-year schedule, retained the most stalwart members of his coterie, including stars Bibi Andersson and Max von Sydow, and his usual production team, led by producer Lars-Owe Carlberg and master cinematographer Sven Nykvist.

Its familiarity of themes and characters (and characters’ names!) make The Touch seem like pro forma Bergman, especially compared to The Serpent’s Egg, the director’s only other English-language venture, made in Germany while Bergman was in tax exile, and often considered his biggest failure. But that film, with its grungy Weimar Berlin setting and dark, crypto-historical sweep, was at least a reach for Bergman—an interesting experiment, neither wholly successful nor embarrassing. The Touch, by contrast, is, in fact, exactly the kind of film that one, with a knee-jerk politique des auteurs, may feel obliged to defend: a maligned work that nonetheless betrays the underlying, but univocal idiosyncrasies of its author. It is a film maudit not because it suggests a filmmaker struggling with his material, but because the film falls short of the mark even while it remains so close to Bergman’s other work. In this way, it’s the film maudit at its most maudit: the self-parody.

It’s unclear, though, just how innovative Bergman was planning to be when he made The Touch—at least, there are conflicting accounts of just what he wanted out of his international coproduction deal and his first foreign-language film. Many years later, in his 1993 memoir Images: My Life in Film, he characterized his intentions with typically scabrous self-criticism: “The Touch was supposed to make a lot of money for its author. I have probably resisted the temptation to make money more often than I have yielded to it. But there were times when I did yield completely, and I have inevitably lived to regret it.” But the idea of Bergman cashing in—whatever that means—doesn’t quite explain the film itself, nor do his explanations of the film’s plot and purpose: at the time of the film’s release, the director variously described the film as “an everyday story” (to his friend and frequent interviewer, Stig Björkman) and as his “first love story,” a characterization that prompted New York Times critic Vincent Canby to quip that such a statement “just goes to prove that a director, even one of the best, may often be a most unreliable source of information about his own work. If they aren’t love stories, what—in the name of God (who, in Bergman’s world, is synonymous with enigmatic love)—are Shame and The Passion of Anna? What is Hour of the Wolf?”

What’s strange, too, about the film is the obviously—and characteristically—personal nature of the events depicted in the film. In a promising opening scene, for example, Bergman restages a recent trauma from his own life: the death of his father in 1970. Bibi Andersson, playing the docile bourgeois hausfrau Karin Vergerus, arrives hurriedly at a hospital only to be told by a droll doctor that, “Your mother died 15 minutes ago.” Upon entering the room, Karin notes the tiny insignificant details of her mother’s deathbed—a clock, her mother’s hands—which Nykvist renders in quick, impressionistic shots, as the sound of the street outside fills the soundtrack.

This blunt and tightly constructed scene suggests something of the “everyday story” that Bergman described to Björkman. Indeed, many of the film’s more welcome moments follow Andersson’s Karin as she goes about her day—prepping the kids for school, kissing her bland, dutiful husband Andreas (played by von Sydow)—as a ridiculously giddy pop song plays in the background. (This inclusion is the film’s weirdest element, though not an unwelcome contrast to the otherwise funereal organ music that plays throughout.) Later in the film, as Karin is getting ready for her first adulterous tryst with the American David Kovacs (whom she met at the hospital), there’s an almost absurd montage of her frantically trying on different outfits that suggests something out of a Doris Day/Rock Hudson film. And later still, once Karin is already enmeshed in her affair with David, when we see Karin socializing alongside her husband at a party, Nykvist keeps his camera distant in order to simply watch Karin from afar as she goes through the motions of charm and propriety, even as she’s called away to the phone. (It’s David, of course.)

Bergman’s fascination with the character of Karin—and perhaps many viewers’ fascination with Bibi Andersson—gives the film a bit of grounding, keeping the story engaging even when it goes off the rails. In fact, it was the seed from which the entire film grew, at least as Bergman described it to Björkman: “The film was originally conceived as a portrait of a woman. It doesn’t deal with a magnificent and outstanding and glamorous woman. She is a middle-class housewife who lives in an enormously protected environment, in a world that is terribly cut off from the real world and its disasters and the draughts and the neuroses.” What’s strange about this description, at least in contrast to the film itself, is how pathetic it makes Karin sound—or else how condescending it makes Bergman sound. Later, he describes the affair that Karin begins with David as a kind of masochistic endeavor, stemming from her desire to “wound” herself in such a way that will wake her up from her “sleeping beauty world.”

This “wound” doesn’t take long to materialize—for Karin or the audience. It’s not long after the consummation of their affair that David becomes irritable, berating Karin as a “domestic service agency” (shades of Bergman’s own condescension here), and whining to her down the telephone: “Can’t you come to me this instant? I’m longing for you!” These tirades become increasingly desperate and controlling—”You’re not sober and you’ve been smoking!”—and even violent, as when, in a fit of rage and raw emotion, he rapes her, screaming in German, while still in his bathrobe. In an inspired, if excessive bit of sound design, Bergman makes this scene still more unbearable by adding the (presumably diegetic) sound of a buzzsaw in the background.

All of this violent infidelity and railing against bourgeois normativity suggests that Bergman was once again entertaining a number of complex emotions about “settling down.” What’s interesting about The Touch, especially with regards to Bergman’s comments about his hope for a big payday, is the amount of sex and nudity in the film. This was not a first for Bergman—his films gained recognition in the first place partly because of their supposedly lax, Scandinavian mores—but the degree and kind of sex depicted here places the film in an interesting context alongside the many other boundary-pushing films of 1971, like A Clockwork Orange, Straw Dogs, The Devils, Murmur of the Heart, Pasolini’s Decameron, and Carnal Knowledge. In this way, the “wound” that Bergman talks about is very much a cultural one as well, and one to which he was perhaps uncharacteristically attuned. Perhaps this was what prompted him to cast Elliott Gould, then a darling of the New American Cinema and counterculture, whom Bergman had first spotted in Richard Rush’s 1970 film about student activism, Getting Straight.

It’s tempting to say that the problems of a film like The Touch result from something “lost in translation,” that certain directors lose their force in language not their own (a charge also laid at the feet of Wong Kar-wai after My Blueberry Nights). But whatever the language, Gould seems a particularly odd choice for Bergman. For one, he was a thoroughly self-taught actor with no stagecraft, a sharp contrast to Bergman’s regular players, most of whom were die-hard theater professionals and, like their director, workaholics. There are problems with dialogue, to be sure: stilted turns of phrase, like the supposedly offhand question “The marriage is a happy one?”, that ought really to have been corrected by a native English-speaker. David Kovacs is a tricky character, too: cuddly one moment and raving the next, the role almost demands a wildly uneven performance. We later learn that Kovacs is a Holocaust survivor, as if that explains everything.

But even in his more mellow moments, Gould strains not only sympathy, but credibility as well. Take, for example, a classic Bergman device: the direct-address epistle, so mesmerizing in the hands of Ingrid Thulin, reading her letter to Gunnar Bjornstrand in Winter Light, or the intense bookending monologues of Liv Ullmann, delivered straight to the camera in Hour of the Wolf. In The Touch, Gould speaks confessionally into the lens wearing a red t-shirt and effecting his usual laid-back slouch. Moments like these suggest that Gould was not simply wrong for the part, but utterly foreign to Bergman’s sensibility. This may in fact have been what the director was after—a sort of shock to the system of bourgeois Scandinavian fussiness—but then nearly all of Bergman’s films function this way much more subtly. His characters are quite frequently weak, tarnished people who become richly sympathetic, even if they don’t become heroic. David, by contrast, is just a nuisance, and Karin, who likens him to her “newborn child,” becomes less interesting the more she obsesses over him. And maybe it’s because von Sydow is just a better actor, but his pitiable, cuckolded husband is more affecting than Gould’s bratty neurotic.

Whatever Bergman’s goals, aesthetic or financial, for The Touch, the film does seem to mark a fairly decisive shift in his career. For one, it is his final film with Max von Sydow and his last with already semi-retired cinematographer Gunnar Fischer, who had not worked with Bergman since 1960’s The Devil’s Eye when he shot the lovely, evocative shots of Visby, on the island of Gotland, that accompany The Touch’s main titles. More importantly, there’s little in The Touch to suggest the next phase of Bergman’s career: the succession of intensely realized and still more deeply personal ‘70s works that begins with 1972’s Cries and Whispers and ends with Autumn Sonata, from 1978.

Of those films, the real masterpiece is Scenes from a Marriage, a film that feels strangely germane to—and infinitely more grown-up than—The Touch. Rather than belabor the critique of the petty domestic housewife with puckish scenes from an affair, Bergman here thoroughly explores the architecture of matrimony itself, its unmaking and remaking. It’s a film that transcends The Touch in every way, both in its disciplined take on all those petulant temper-tantrums and its evident respect and empathy for its characters. “I’ve accepted my true dimensions with a certain sense of humility,” Erland Josephson says at the end of that film, and the moment, devoid of all condescension and vinegar, is for that reason all the more touching.