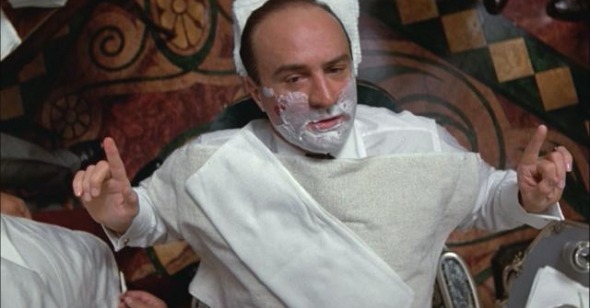 Stairway to Hell
Eric Kohn on The Untouchables

The jury will always be out on Brian De Palma’s addiction to homage. Insistently quoting from earlier works, he builds a subcontext that often works tangentially to the main narrative. His innumerable references to Hitchcock demonstrate that suspense can finagle into practically any scenario, but they also inevitably invite comparison between De Palma’s own abilities and those of his referents. This makes him either pretentious or brave—depending on how he’s skewed—but always divisive, especially when a particular film features a high percentage of precedent material. He doesn’t so much invite moral outrage as toy with cinematic sacrilege, shamelessly culling from the holy library of moving pictures and making no apologies for his ambition.

In the case of his thrillers, De Palma recycles formula beautifully, filtering it through his own cine-quixotic vision (Sisters and Dressed to Kill are terrific examples). However, unlike his other two contributions to the crime genre, Scarface and Carlito’s Way, The Untouchables is mostly a mess. Working from a script by David Mamet that takes equal cues from the early Sixties television show and legendary copper Eliot Ness’s famous prohibition-era takedown of Al Capone, De Palma’s version is a jumble of half-developed plotlines and incredulous impersonations (particularly egregious are Robert DeNiro, in a minor variation on gangsters he’d done in the past, as Capone, whose fragmented scenes shed no light on the strengths of the crime lord’s personality, and Kevin Costner, sounding as if he’s reading Ness’s lines off a cue card.) Only Sean Connery, in an Oscar-winning role as keen and ornery lawman Jim Malone, brings any sort of believable presence.

When it was released in 1987, The Untouchables’ success was across the board. In addition to grossing somewhere in the neighborhood of $80 million domestically (three times its budget), it was well-reviewed by a number of mainstream critics. Fancy gift-wrapping, included gorgeous photography by Stephen H. Burum and Ennio Morricone’s memorably dark score, obscuring its sloppy plot, one-note characters, and uninspired resolution—but the real shocker is how much of the running time it takes before this becomes clear. An opening caption introduces Chicago during “the time of Al Capone” as the nefarious gangster gets a shave while chatting convivially with reporters; in the following scene, a young girl dies in an explosion planted by an anonymous henchman. The connection is clear: this is a city gripped with fear. As the perspective shifts to Ness, nervously accepting his role as chief enforcer of Prohibition, credibility gives way to playfulness. Ness can’t nail Capone with his corrupt police force, so he forms an impromptu quartet held together by Malone’s inexplicable knowledge of criminal tactics (his application to the team is painless: all he has to say is, “I’m a good cop,” and Ness hires him).

The Untouchables’ self-consciously recycled genre tropes never really ignite—that is, until the climactic staircase sequence, a nod to the Odessa steps slaughter in Sergei Eisenstein’s 1925 Battleship Potemkin, which remains one of the strongest uses of montage in the history of the art form, even without the aid of sound. The scene in The Untouchables may come across as a sloppy imitation, but it remains memorable for the sheer skill with which De Palma enacts it. Yet this version has none of Eisenstein’s probing political dynamic, which strips the images of any real reason for existence beyond pure showmanship.

To be fair, De Palma’s story is not nearly as epic in scope as Potemkin, and it pulls its weight for successfully creating tension with subtlety, rather than shock. Ness, nervously awaiting a confrontation with Capone’s men at the train station, notices a woman struggling to pull her child up a staircase below his stakeout. As twinkling kiddie music plays against the action, the woman is seen from Ness’s point of view, and his moral conundrum becomes immediately apparent: Does he help the woman, and make himself vulnerable, or is chivalry finally dead? Not in the genteel Thirties, it seems.

Ness rushes down to assist her, pulling the carriage up the stairs with a vacant look in his eyes. The sound of the carriage bumping up the steps and the mother’s words of gratitude fade out, only to be replaced by Morricone’s foreboding score, which reaches its crescendo as Costner turns in slo-mo to duel with the armed henchman behind him. As the shooting commences, the reference to Potemkin becomes literal: The carriage begins a slow crawl down the stairs, the baby pacified by the rhythm of its motion. The mother screams out inaudibly, and Ness’s colleague, George (Andy Garcia), manages to bring it to a peaceful break at the bottom of the steps. Sighs of relief are distributed all around—and as an afterthought, one last villain is dispatched. If only the Soviet civilians had been so lucky.

Since this sequence creates suspense through the anticipation of failure, De Palma applies Eisenstein’s montage to a Hitchcockian paradigm. In the Odessa steps scene, chaos has already ensued—the tumbling carriage simply enhances the horrific nature of the event. In De Palma’s world, there’s hardly any question that Ness will save the day. The anticipation stems from waiting to see how he’ll pull it off. There’s great fun inherent in that type of mechanism that almost distracts from the rest of the film’s mediocrity. The Untouchables is a far cry from De Palma’s aesthetic triumphs, but given its knack for top-notch bite-sized cinema, it could be considered one of his greatest achievements.