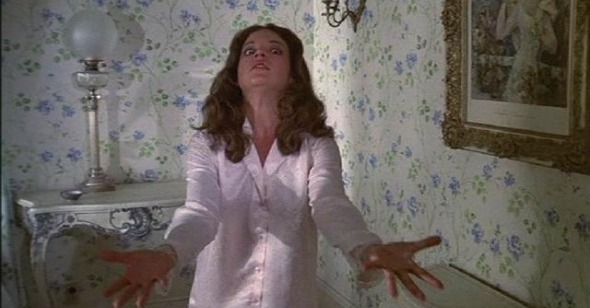 Brian De Palma’s The Fury (1978) recalls something film professor Foster Hirsch said at a mid-October MOMA screening of Otto Preminger’s stunningly awkward—and therefore almost never-seen—hippie comedy Skidoo: it’s the kind of travesty that only a great director could make. Its excesses are committed with a blunt defiance, as though midway through production Brian De Palma realized he had something of a runaway train on his hands. Left with two possible choices, between reaching for the handbrake and flooring the accelerator, De Palma chose the latter, allowing his prodigious and ragged imagination free reign. The Fury, at times as visually expressive as anything De Palma has done, is intriguing primarily from the perspective of the director’s entire oeuvre, just as one might consider Bach’s fugues. Theme and variation, as well as individual moments are far more noteworthy than the scattershot, barely coherent whole. Yet in spite of its manifold flaws, the film is endlessly (and nearly inexplicably) diverting, if nothing else than for sheer, idiosyncratic audacity.

The Fury is an urban reworking of Carrie’s notion of young adulthood as physical and psychological trauma. In one of De Palma’s predictable castings of pretty, vacuous young things, Amy Irving barely plays hard-g Gillian, a gawky mid-twenties ingénue with extraordinary mental abilities: telepathy, telekinesis, and something called “psychometry.” The last of these manifests itself in pretty nasty ways; if she touches a particularly traumatized person or object, she’ll immediately and randomly witness a vignette, usually harrowing, replayed from the subject’s past or future. It also means the unfortunate soul she touches will start to bleed profusely from any number of orifices—noses mainly, but ears, old wounds, eye sockets, and cuticles are just as likely to become wellsprings for torrents of sickly red liquid.

Gillian’s ordeal comes to our attention via Peter Sandza (Kirk Douglas), a member of a governmental agency so secret it is never mentioned by name. Peter has a son, Robin (Andrew Stevens, cast apparently for his sinewy muscles and an ability to make the veins in his forehead throb on command), roughly of equal age and gifts as Gillian, and it is Douglas’s goal, murkily expressed as it is, to find him. A fellow agent and friend, John Cassavetes, as hawkish and steely as ever, engineers a plot in “The Mid East”—clearly Israel, by the flapping flags atop castle turrets—to kill Peter on the resort beach where he’s vacationing, kidnap Brian, and turn him, I believe, into the ultimate human killing machine. Last seen escaping a terrorist death squad via a motorboat that subsequently explodes, Peter is left for dead. But no: Douglas makes the half-mile swim in a matter of seconds, returning to shoot Cassavetes in the arm, which leaves him carrying it in a black sling for the film’s remainder. So begins a cat-and-mouse game, where Cassavetes hunts Douglas, who in turn enlists Gillian’s psychic abilities to find Robin (who just might be “the fury” of the film’s title) for one egregiously messed-up family reunion. But Robin himself is in Cassavetes’s employ. Such flippant plot explication may make the film sound dubious, but there’s nothing but joy to be found in The Fury’s absurd machinations.

De Palma cuts back and forth between the two converging narratives with a wanton disregard for continuity and narrative causality. One sequence in particular crystallizes my gleeful astonishment: while being pursued by Cassavetes’s henchmen, Douglas hijacks a Cadillac and the two off-duty cops driving it, and during the chase leads them to a waterfront construction site—which on a pristinely cloudless night is inexplicably shrouded in fog. Using the confounding mist to his advantage, Douglas offs his pursuers, and then, for no discernable reason, drives the Caddy into the harbor. Drying himself off, he phones up his mistress (who happens to be a nurse at the institute where Gillian is having her cerebrum examined), and propositions her with “I want your body,” in distended vowels befitting a brain-damaged psych ward patient. She drives to meet him so that they can make love, as they usually do, in the back of a VW camper van perched atop a multilevel parking garage. Between these and other super-serious jaw-clenching moments, Douglas, who is called upon to be bare-chested more frequently than is decent for a sexagenarian, is more unself-consciously ridiculous and enjoyable than he has any right to be.

So what does it all mean? Because of the grand tradition of horror as a truss for politics and allegory, the natural tendency is to read in The Fury’s delirium some social indictment. This inclination is reinforced by the largely incomprehensible techno-babble spewed by physicians and technicians attending to the two troubled kids, as well as the film’s barely contained hysteria. The problem with pursuing that line of discourse is that De Palma makes overtures to define a superstructure, but only half-heartedly. Instead, The Fury hints at a litany of antipathies and sympathies endemic to late-Seventies Americana without making a sustained or fully cogent argument. Anxiety over Middle East politics is broadly evoked at, both by the film’s opening terrorist gangbang and a later sequence where Robin, head-veins throbbing, kills a group of ghutra-wearing Saudi Arabians by causing a county fair ride to spin out of control. Cold war paranoia too seeps in at the edges, with Cassavetes obliquely passing off the idea that his telekinetic protégés are a potential weapon giving the U.S. superiority over nuclear rivals China and the Soviet Union. Set against these destructive forces is a hyperbolically bucolic montage of Gillian shown in nuclear family life—ice cream in the park, playing video games with sis, Cokes and greasy pizza around the coffee table, curled up in bed reading a book, playing tug-of-war with an Irish setter. Except that “sis” is Gillian’s nurse, and her “parents” are one matronly and one avuncular doctor. The traditional family in De Palma’s film very simply implodes. Cassavetes’s secretive and powerful agency piles on a measure of distrust of governmental institutions and the potential for deleterious, capriciously wielded power, but The Fury was produced perhaps a little too late for said fear to be inspired by the Nixon administration.

It’s possible—in fact advised—to gloss over the narrative delirium and focus instead on the astounding visual patina: signature bird’s-eye views, beautiful, slowly circling tracking shots, used twice as precursors to inaugurate two particularly frenetic sequences, and a glorious, slow-motion foot chase. Most of The Fury’s arresting individual moments arise out of Gillian’s fragile psychosis: More accurately, her psychosis serves as an excuse for De Palma to attempt some of his more outlandish visual sorties. He makes effective use of his oft-employed split-diopter lens, dividing the screen between Gillian’s immense, fevered, barely conscious brow in the foreground, and her placid caregiver recessed in the background. One of the kid’s triggered visions is edited so as to elide gaps in time and space—and create some impossibly precise visual matches to collide two time periods, where a hand outstretched in an empty room is suddenly caressing a foot in the same place (this time, furnished) from the past, forming a uniquely precarious temporal sphere. De Palma manages to up the ante from this bravura sequence for another vision, rendered on a massive rear-screen projection, in front of which stands Amy Irving. As the apparition plays out in one sweeping camera movement, Irving slowly turns on an unseen revolving platter, independent of the screen, creating a destabilizing disconnect between foreground and background space. The vertiginous dread induced by the shot is worthy, unsurprisingly, of Hitchcock.

Any piece attempting to tackle The Fury would be remiss to not address its denouement (So—etc., etc.—stop reading now for all the obvious reasons), a spectacularly grotesque Electra-complex exorcism. In one blistering moment of 80s self-actualization avant la lettre, Gillian takes her retribution on Cassavetes—it’s the film’s true “Fury,” a revenge fantasy aimed at reversing the trope of female victimhood; faster than Femme Fatale, she becomes an avenging angel, and in the process purges her pain. In a setup that literally has to be seen to be believed, a sobbing Gillian falls into Cassavetes’s consoling embrace, as the camera moves uncomfortably close. Her mouth moves from crying to the sexual neediness that can only come from fathomless pain, and she kisses Cassavetes on his closed eyelid, at which point he goes blind, blood streaming from his sockets. With Cassavetes asserting himself as a potential father figure, the female-Oedipal overtones could hardly be more palpable or queasy. But wait, it gets better. He stumbles around the room like Frankenstein, and Gillian focuses her psychic energies on the locus of her loathing, hands trembling, eyes flashing electric blue. Cassavetes—my god—explodes: blood atomized and flying in all directions, clothes rent asunder, organs minced into tiny little pieces, head popping off. It’s shown thirteen times from every conceivable angle before the film abruptly, viciously cuts to black. De Palma gives no quarter, no respite, no feeble sense of release or edification, just the awesome—literally awesome—spectacle of viscera erupting everywhere. And it’s effing beautiful.