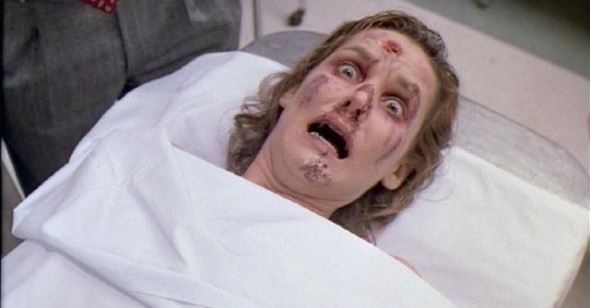 A big-font banner ad for its director’s grandiose audience needling, 1992’s Raising Cain was supposed to be, or was at least anticipated as, De Palma’s “return to form.” Coming two years after the super-sized box-office debacle and superstar receptacle The Bonfire of the Vanities (which had the temerity to transform a sacred cow of popular fiction into a crass, almost slapstick, comedy that didn’t make any stabs at subtlety), and a full eight years after Body Double, his last Hitchschlock riff, Cain gleefully pushed De Palma’s self-referential set pieces and meta-mega loop de loops further than ever before. Its patently absurd plot turns, constantly shifting subjectivities, and massively convoluted dreamscapes anticipated Femme Fatale but with less sense of outwardly “refined” style and narrative resolution. Raising Cain is, for nearly every second of its running time, at once maddeningly opaque and vomitously expository, as if the glossy fantasies and tedious story wrap-ups kept quarantined from each other in Dressed to Kill were in a constant dialogue, battling for screen supremacy. The film flaunts its referents with such fuck-you abandon that it ends up barely representing anything it’s referencing at all. Disreputable and trashy, Raising Cain was a “comeback” only in as much as it was merely another jab in the eye of those who found his earlier thriller concoctions needlessly intricate, labyrinthine, and softcore skuzzy.

Despite Raising Cain’s reputation as a failure in a career already spotted with films maudits (another writer in this issue of Reverse Shot coughs it off as “foolish”), I would never try to recoup it as “misunderstood.” Viewers get it just fine; it’s just that its pleasures, while layered, are easy to dismiss, remain on the surface, zigging and zagging with the thrill of the ridiculous. Its gaudiness doesn’t manage to reach pure visual sublimity (as in Femme Fatale) or lower itself to the depths of unapologetic depravity (Body Double), but it’s certainly of a piece with both of those films, flouncing and flaunting its influences like dangly plastic pineapple earrings.

Undoubtedly Raising Cain interrogates, if teasingly, the mechanics of homage and suspense—yet De Palma knows full well that this time, his gooey layer cake of transvestism, multiple personalities, evil twins, and dreams within dreams cannot possibly function within high-art trappings. Raising Cain has the feel of a middlebrow nightmare (its distressingly even lighting, odd for De Palma, recalls nothing so much as contemporary bourgeois comedies such as Father of the Bride) that grows ever darker and difficult to get a handle on. It’s the perfect late-night cable film: it leaves you bleary-eyed, bemused, and sated; the whole thing feels chintzy, yet its cheap shocks are among the best in his career. A woman awakening with a piercing scream in the back of a car as it inches ever further into a lake’s murky depths a la Psycho; a face reflected in a fuzzy-blue monitor, once here and gone, devilish with vengeful fury.

Zippier (and dippier) than any other De Palma narrative (save perhaps the more elegantly constructed and more than a tad hallucinogenic Scarface), Raising Cain practically courts dismissal: from its opening scene, it sets viewers on a precarious edge, as there’s a slight disconnect between our narrative involvement and our slightly bemused, mocking detachment. John Lithgow’s dewy, deferential child development psychologist Carter Nix is barely introduced before he’s already chloroforming some poor playground mom; and a full five minutes in, Lithgow already appears in role number two as Carter’s evil twin brother, decked out in full sunglasses-and-leather-jacket gear, egging his brother on like a little pitchfork-wielding shoulder devil. The film then moves along so quickly from one lengthy, bizarro set piece to the next, that we barely have time to assess its inherent cartoonishness. Carter, constantly mocked by his cigarette-wielding alter ego, without much explanation seems to be knocking off local moms so that he can whisk away their toddlers to his father’s child development clinic in Oslo. Naturally, this father, thick with slithery bluster and a Norwegian accent that sounds vaguely Bavarian by way of Prince Vlad (“We don’t need a luss cannon here!”), is also played by Lithgow, that reliable De Palma ham, whose entire performance registers as a full-length variation on his ten-second “She made me do it…” telephone whimpering in Blow Out. Ever the game burlesquer, Lithgow fully inhabits his multiple roles with Jon Lovitz “theatah” deprecation. The opening moments, so suffocatingly filled with low and high angle close-ups of Lithgow’s sweaty, overgrown-baby facial contortions, are both disorienting and insufferable—and every moment is inhabited by a perverse audience-baiting, almost daring us to take it seriously.

So quickly then does De Palma yank away our shaky groundings, by shifting subjectivity to his wild-eyed wife, Jenny (blowsy, early nineties mainstay Lolita Davidovich), that we’re both relieved and jarred. And here’s where De Palma gets really tricky: once Davidovich’s narrative thread begins—which focuses, naturally, on her infidelity, with the oily-handsome Jack (Stephen Bauer, that thick, meaty slab from Scarface), as much an untrustworthy but ultimately ineffectual lothario as the mystery museum man in Dressed to Kill—literally everything we see, for a good fifteen minutes, functions within dreams or flashbacks, or flashbacks within dreams. Twice Davidovich wakes up, both times after a sizable chunk of ostensible plot exposition has been related, leaving everything preceding it as completely unreliable primary narrative information, including a pivotal clandestine sex rendezvous in a public park and a reminiscence of their first meeting, in which Jenny was nursing Jack’s dying wife in the hospital while they were carrying on an affair, their kiss caught as a reflection in the hospital TV screen by Jack’s wife, just one of the film’s many jolts brought on by quick cuts to shocked, wide-eyed faces. To further confuse matters, after her awakening, part of what has seemingly been imagined as an erotic daydream now replays before our eyes as the memory of a third party, John Lithgow’s villainous, suddenly jealous husband, as he attempts to suffocate Jenny with a pillow.

Perspectives keep shifting: the rightly famous long, long take of Frances Sternhagen’s bewigged criminal psychologist investigating Carter/Cain’s criminal behavior moving from the top floor of the most labyrinthine police station ever put on film down to the morgue has a queasier effect than even the thirteen-minute opening shot of Snake Eyes; this is because De Palma’s forcing our attention on an entirely new set of characters. De Palma practically self-parodies his skill at storytelling transference (think of Jennifer Salt in Sisters or Nancy Allen in Dressed to Kill, all passed the narrative torch in mid-virtuoso set piece), by moving supremacy from Lithgow to Davidovich to Bauer, and then to whoever else seems to crop up: one oddly lengthy scene introduces a retired cop who wants back on the Nix kidnapping case before the film summarily drops him. Then it’s on to Sternhagen’s phenomenally showy Dr. Waldheim, agonizingly explaining away split personality disorder, and thus, the film’s central conceits, down escalators, elevators, and through hallways, before De Palma moves his camera up to one very Frenzy-inspired close up in the morgue. It’s exposition as literal labyrinth.

As if in autocritique to those who would dare to confuse such trickery for a mistaken mashup, De Palma continually returns to an image of a tiny, gift-store Tiffany clock that chimes to Grieg’s “Morning,” purchased by Jenny as a flirtation instrument for Jack. Raising Cain is nothing if not a play on time, folding back on itself with increasingly back-breaking calisthenics, yet to what end? Simply put, Raising Cain is a film that might as well be narrated by multiple personalities—and along with Scorsese’s After Hours it feels as wholly, organically borne of the uncanny as is cinematically possible in narrative cinema. Often, De Palma will present an object for our contemplation (those identical gift clocks, pointed objects such as spears and sundials, which could return as possible weapons), only to bring it back later as a madeleine, an intuitive through-line to an earlier scene, now only a faint memory.

It’s almost freeform in its dream logic, even more so than Femme Fatale, as its playground of chronological dead ends do not serve any greater moral outcome or throw the whole into thematic relief: in Femme Fatale, Laure’s climactic watery awakening supposes a self-motivated redemption of an oft debased film type, but in Raising Cain, De Palma’s ever-convoluted spiraling into dreams only complicates matters. Time is so compressed, exposition so condensed, and the narrative’s loyalties jump so freely and with such abandon, that De Palma never seems interested in its characters for more than ten minutes at a time. Sure, this may fuel such rote arguments that De Palma is more a master manipulator than a humane filmmaker, but Raising Cain, which functions quite unlike any of his other films, is his most purely down-the-rabbit-hole thriller. As the final shot attests, there’s no workable way back to the surface. And that’s an entirely pleasurable way to get lost.