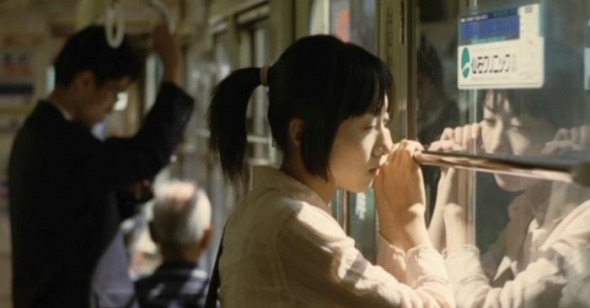 Because of its prefacing epigram, Hou Hsiao-hsien’s Café Lumiere has drawn a barrage of comparisons to Yasujiro Ozu. Hou dedicated his film to the occasion of Ozu’s birth centenary, but upon further reflection, it seems like a ploy to shut the public up. Critics have insistently brought up the connections between these two masters—use of pregnant off-screen space; deep-focus domestic sightlines fashioned from open door frames and frontal tableaux; verisimilitude of mundane daily life predicated on sparse, elliptical narratives—and Hou, equally intractable, has vehemently denied them. Now that he’s acknowledged their affinities, we can move onto other more interesting concerns. For as much as Café Lumiere out-Ozus Ozu, there are other issues at stake that surpasses facile comparisons between directors: modernism and the metropolis.

Confronting modernism in the cinema is almost unavoidable, mainly because its apparatus came to life around the same time as the modern metropolitan boom. Nearly every argument about modernity has been promulgated, advanced, rehearsed, and subsequently beaten to death. Except for the one depicted in Café Lumiere: modernism that doesn’t alienate us from one another, deaden the mind, quicken the pulse, or inflame the most carnal passions. For that reason, the film is most at odds with F.W. Murnau’s silent 1927 film Sunrise, the canonical representation of the exciting and/or dangerous encounters that people can experience in the budding metropolis versus the relative slumber of the bucolic countryside. Margaret Livingston’s unnamed vamp who invades the country embodies the city’s supple seductions, an avatar that presages the living nightmare that emerges when the story moves to the metropolis. There, the “Man and Wife” couple (George O’Brien and Janet Gaynor) are confronted with myriad aural and visual assaults and predatory suitors at every turn that destabilize and threaten their already fragile relationship. Though, as with much of American cinema, collective anxieties are displaced onto the insular concerns of the romantic couple, we cannot forget the fact that this attitude toward the city is grounded in social history. Narrative cinema’s ascendancy roughly coincided with the expansion of modern metropolises, and therefore the medium was convenient for expressing the anxieties attendant with adjusting to a new, that is urban, way of life.

Fast-forward 75 years to Café Lumiere’s completation, and these concerns are moot. The last of those who remember a pre-metropolitan world have all but passed away, meaning that the metropolis, especially in the age of affordable international travel, is a novelty for fewer and fewer people. Telecommunications have demystified what once were foreboding dens of iniquity—put more simply, the city is a less scary place to be. The two figures that most prominently inhabit Hou’s Tokyo—chosen seemingly at random from the entire metropolitan mélange—are a pair of twentysomethings, Yoko (Yo Hitoto) and her friend Hajime (Tadanobu Asano), who inhabit the city with few (if any) fears, wending their way through the streets without fear of being run over, or being accosted by sexual predators. Throughout the course of their meandering, peripatetic lives, modernity is a matter of course, a fact of life that doesn’t profoundly (or at least consciously) affect the people who are born within its structures. How would they know? It’s like asking a fish what water feels like—having never known any other medium, it’s incongruous to expect a lucidly reasoned answer.

For this reason, the bookshop owner Hajime can’t give Yoko a coherent interpretation for his little piece of computer graphic art. In it, a 2001-like fetal baby sports a minidisc recorder and a pair of headphones, surrounded by a cocoon of different-colored Tokyo tram cars, embedded in a matrix of train tracks. When pressed for an explanation (why are the cars different colors? why are the train tracks drawn to different lengths?), the answer doesn’t conceal any lofty artistic statements: the colors are the exact ones that represent Tokyo’s myriad transportations lines and he doesn’t know why the tracks have been drawn with different lengths. To the outsider, the cinema spectator, the meaning is clear. Traditionally, trains connote velocity in life, a collapsing of geographical distances, speed of communications, etc—but to Hajime they are naturalized, the only available means of conveyance. His baby is born of the modern and, to mix metaphors, can’t see the forest for the trees and therefore cannot articulate the boundaries of his position. That’s not to say that Hajime doesn’t try, spending his daily subway sojourns with the aforementioned recorder and headphones, searching for sounds that will reveal a meaning to his existence —but, implicitly, a meaning of the modern remains elusive.

Hou muses about modernity in Hajime’s stead, taking the recurring image of viewing street scenes from the Lumières’ pioneering shorts, and in one sequence, evoking a shot from the streetcar sequence of Sunrise by strapping the camera to the front of a moving streetcar. In Murnau, the shot was designed to highlight antipathies between city and country living; the metropolis’ dizzying, disorienting velocity versus the country’s sedate comfort. For Hou, the same setup conveys nothing more than how these people get around the city. There is also, of course, the abiding debt to Ozu, acknowledged master of modernist symptomatology, though the connection between the two directors remains somewhat contentious. Over his career, Hou has demonstrated chameleon aesthetic tendencies that complicate neat comparisons to Ozu. In his City of Sadness, the camera reacts to and follows the action in opposition to Ozu’s generally less mobile frame. Good Men, Good Women makes unparalleled forays away from verisimilitude and towards fantasy/memory. And Flowers of Shanghai is just so completely beautiful and sumptuous that it’s practically anathema to Ozu’s stolid realism.

From its opening shot, where a train enters the “Café Lumière,” Hou’s film feels like the film Ozu would make were he alive today; at the same time, Hou’s allusive hand is also present. If Café Lumiere celebrates Ozu, it does so in a curious fashion. The film is a reversal, in nearly every way, of the trajectories and sympathies described in Ozu’s masterwork Tokyo Story. Tomi and Shukichi, the elderly couple, travel to the teeming metropolis to visit their two children in Tokyo Story; Yoko takes the train to visit her late middle-aged parents, moving from the center of the city to the outskirts in Lumiere. Tomi and Shukichi function as sympathetic centers as they are marginalized and shunted off to a health spa, and their children are indicted for their indifference; Lumiere’s sympathies lie with Yoko as she informs her parents, matter-of-factly, that she’s having a baby and no, she won’t be marring the father. Major dramatic moments like parental abandonment and death function as Tokyo Story’s narrative fulcra; events that conventionally would normally merit theatrical staging (i.e. Yoko’s pregnancy) are played in Lumiere as throwaway moments. Hou’s work isn’t quite a rebuke of Ozu—the cinematography demonstrates too much affection and respect for Yasujiro, at times recreating exact spatial relations—but it does prompt meditation on how Ozu’s work can be updated. Friction between generations and the conflict over their ideals are still at stake under Hou, but ethical norms have shifted in the 50 years since Tokyo Story, and the city is no longer considered a place of moral decay.

But enough about Ozu (though Hou does also share his penchant for exploring generations disenchanted with one another). Not one but two types of generational meeting define Café Lumiere. Yoko fails to identify with, or indeed attempt to understand, her own very alive parents but ironically seeks to comprehend the life of a deceased Taiwanese composer-pianist, Jiang Wen-Ye, who spent time in Tokyo. However, interrogating the past proves difficult in the never-ending flux of city life. Antiquated maps point to roads either re-routed or entirely renamed; official city histories don’t mark the changes in land ownership, so when Yoko seeks out the composer’s former haunts, she has to rely on the unofficial verbal history handed down by barkeepers and café owners. She also asks questions of Jiang’s widow that she doesn’t of her own parents; their interactions are rendered through awkward silences that drag out talks with her mother, or the meals whose main function is to fill in the terrible dead time in their conversations. But the disjunct is never fully explored; Hou’s technique is emotionally oblique, a refusal of interiority in favor of non-expressive surfaces. As Yoko’s family eats at a restaurant, they sit at a bar with their backs towards the camera. Side by side, their only communication comes from their slurping sounds as they avoid each other’s eyes. The other great non-moment in the film comes as Yoko announces her pregnancy, in the dead of the night, hunched over a midnight snack, again with her back to the camera. The characters, from vaguely expressive Hajime, through Yoko, and then to the bewildered parents, either can’t seem to articulate their emotions, or are denied frontal framing that might allow us to interpret from their faces.

Instead, objects are made more expressive. Yoko never overtly shows anxiety over her pregnancy or her impending motherhood; her emotional state is instead mediated through a Maurice Sendak fairy tale that tells the story of a baby abducted by goblins from under an unobservant mother’s nose. Gifts brought from abroad—Taiwan, a sly reference to Hou filming outside his native home for only the second time—serve as indicators of friendship, communal musical interests and culture serve as the ties that bind, and wordlessly hanging out with someone is a substitute for meaningful conversation. Without declarative statements, the relationships are a little knotty. Yoko is pregnant by some anonymous man from Taiwan but spends most of time with Hajime, even bringing him back a watch from her travels; what do they mean to each other? They are colleagues in the Jiang research project, but there are also peripheral signs of something more affectionate at play. Hajime himself seems confused, his reaction when learning of Yoko’s pregnancy portrayed in mute shock; Yoko’s side of the equation is also tacit and facially inexpressive. By staying far away, with the camera capturing her from across the street or the other side of a coffee shop, we never know what she’s feeling.

Lee Pin Bing’s cinematography is vaguely voyeuristic, panning from afar to capture Yoko as she wanders, photographing the modern buildings that replace the haunts Jiang inhabited during his Tokyo years. And while the camera sits, capturing the world that unfolds before it, Café Lumière doesn’t operate in the contemporary “realist” mode, which is to say a complete negation of style. Hou’s view is spare, but its internal rhythms work to create elegant lyricism, and management of the mis-en-scène clearly establishes character sympathies and commitment, especially in the penultimate sequence: re-forging, however slowly, the affective link between alienated generations.

If there is an organizing principle in Café Lumiere—which is dubious, because its thematic commitments are as meandering as its characters—it’s that Hou rehearses the various modernist arguments that float through the ether. Ultimately, in the next to last shot, he asserts that the city is a place where meaningful relationships can be built, but that’s partially because trains, as grand synecdoche for modernity, have become contemporary society’s transparent matrix, and not its driving motor.