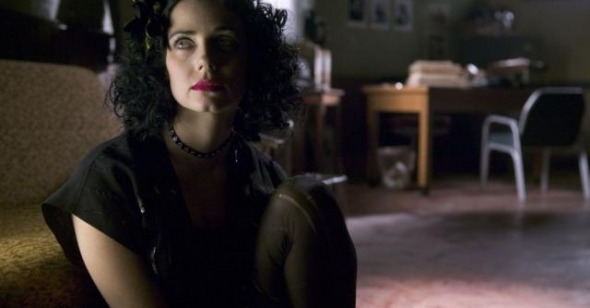 Is there ever a good time to release a De Palma picture? He’s one of the few currently working American directors who inspires extreme reactions among the critical populace, with the hosannas as equally sharp (and as likely to kill) as the heckles. We critics like to think that our own splits in taste represent similar dichotomies in the public at large, but I suspect the mass audience finds little use for argument in De Palma’s case. (“Is he serious?” Jean Reno asks pointedly, in Mission: Impossible, of both Cruise and creator.) Indeed, De Palma’s too esoteric, too singular, too strange to sit comfortably on the palate of public discourse beyond the occasional populist misread (Carrie, Scarface, The Untouchables). So he touches individuals, deeply and profoundly, haters and lovers alike, though there’s a good cross-section of folks for whom he means absolutely nothing and is shunted to the side. “The yawnsome The Black Dahlia,” a colleague wrote of De Palma’s latest film; reading his dismissal, you’d swear you were staring down a Garfield-sized gullet, straight back to a weary set of tonsils.

This could be little more than a myopic acknowledgement of the here and now opinion on De Palma, and I only bring it up because of my own fascination with the critical response to the above-mentioned Black Dahlia, which has even seasoned, dyed-in-the-wool De Palmaniacs second-guessing themselves, practically brandishing a whip and lion tamer’s chair while beating a defensive, hasty retreat. That the film was released at the same time as the superficially similar Hollywoodland certainly didn’t help its prospects among any audience (some writers even paired the films up as a dual review). A consumer-reporter mentality often sets in among those who watch films for a living—we look for an easy compare and contrast, evidence that what we’re seeing has been done before, rather than questioning if we might not be in the presence of something new and unexpected, something for which our perceptions and priorities need to be rethought and reexamined.

I’ll admit my first viewing of The Black Dahlia was perplexing: I wasn’t sure I liked it much, but I knew there was something there worth considering, even if I’d eventually come up negative on it. As far as De Palma goes this isn’t anything new. I’ve tended to be harsher on the films of his (e.g. Blow Out and Casualties of War) that feature a center-stage male protagonist, though until Dahlia—which, several viewings later, I now consider to be one of his all-time greatest efforts—I could never particularly express why beyond a gnawing and lingering dissatisfaction seemingly related to the usual suspects (plot, structure, characterization, etc). More attractive to me were De Palma’s female-centric movies (e.g. Dressed to Kill and Femme Fatale) where even in violent death the characters attained some kind of discernible glory. De Palma’s women are larger than life, while his men are grounded in everyday folly. I don’t like having my foibles handed back to me, but, as a good friend once wisely observed, a true artist should never give us what we want, only what we didn’t know we needed.

In this respect, The Black Dahlia is one of De Palma’s most unflattering mirrors, its entirely uncompromised mise en scène in every way the stylistic equal of James Ellroy’s source novel. I had as much trouble getting into Ellroy’s fictionalization of the Elizabeth Short murder mystery until I recognized that he is, in part, a parodist, using hard-boiled, floridly macho prose to get at deeper psychological truths about human nature. He wields a pen in much the same way De Palma does a camera—to create, for both men, is to bear witness with a fervor approaching, if not attaining, the religious. Their shared vessel is the young warrants detective Dwight “Bucky” Bleichert, a model of first-person arrogance in the novel, cast as something of an androgynous specter in De Palma’s adaptation. Embodied by a never-better Josh Hartnett, Bleichert wanders through a falsified period landscape, recalling his loss of innocence (or acknowledging his always-present corruption) through a precisely employed voiceover that casts each and every event (save for the film’s brilliantly nonredemptive final sequence) within the deceptive realm of memory.

Everywhere Bleichert goes seems on the verge of collapse; when he and his partner Lee Blanchard (Aaron Eckhart) exit a diner by the sea, it is conspicuously labeled “Diner by the Sea,” as if it’s nothing more than a schematic representation, likely to topple at the slightest exertion (perhaps during the mid-movie earthquake that simultaneously signifies and disguises a fatal split between friends). The sense that we’re wandering with Bleichert through a contained series of memories, a hothouse of reminiscence, is only heightened by De Palma and screenwriter Josh Friedman’s choice to set the story entirely in Los Angeles. (They excise the novel’s side trips to Tijuana and Massachusetts, yet find potent onscreen parallels—usually revolving around massive, Expressionist staircases— for what those narrative detours represented.) Indeed, there’s nothing but L.A. in The Black Dahlia and, though ostensibly set in the mid- to late-1940s, the film’s locale occupies no particular time period, looking forward as much as back in its fashions, tastes, and ideologies. “So you don’t like my taste in art,” says the villainous Emmett Linscott (John Kavanagh), “That’s not a crime.” But what taste does he speak of exactly?

The Black Dahlia is a veritable mishmash of textures and styles: A world where the Sixties-coiffed Kay Lake (Scarlett Johansson)—Blanchard’s live-in girlfriend and Bleichert’s distant object of affection—attends a Terence Davies–esque revival of the silent film adaptation of Victor Hugo’s The Man Who Laughs, its crackly, romantic score bleeding seamlessly into Mark Isham’s postmodernist reconstruction (heavy on the Herrmann–ish theremin). A period where k.d. lang officiates (in a top hat and tails get-up straight out of von Sternberg’s Morocco) over a lesbian bar sideshow that sets the stage for the exemplary drag-queen entrance of mannish Dahlia wannabe—and Bleichert seductress—Madeleine Linscott (Hilary Swank), her name as much a reference to Proust’s aromatic recollections as to Hitchcock’s obsessive blond/brunette dichotomies. A place where Bleichert is as likely to stumble on a Vietnam-styled death tableau in a guilt-ridden abstraction of Chinatown as upon a Beverly Hills manse’s hierarchical theater-of-the-absurd stairway, all eyes intently focused on the explicative, suicide-note brayings of the insanely love-struck Ramona Linscott (Fiona Shaw) who, as a perhaps unknowing complement to the views of her jealous husband, smilingly proffers that “[the rich] safeguard [art] for future generations.”

A portrait of Hugo’s deformed protagonist Gwynplaine is the key that unlocks the mystery of the murdered starlet Elizabeth Short (Mia Kirshner)—the painting leads inexorably to several half-remembered motion pictures that veil their dark, reverberative secrets in the blinding glamour and deceitful hopes of Hollywood(land). Staring out, with pained wide eyes, from deep within the confines of a glistening black-and-white screen test (conducted, with satirically misogynist interjections, by an off-screen De Palma), Betty Short relates her hopes and fears, her confession camouflaged in the deadpan entreaties and manipulative endearments of a seemingly bad actress. There’s raw talent here that no one is willing to mine, only to co-opt—as does Swank’s Madeleine—for themselves. But Betty Short’s spirit, even in death, won’t have it. If there’s triumph to be had in The Black Dahlia, it’s in the way her memory, like a lingering canker, haunts the story’s survivors. “I think you’d rather fuck me than kill me. But you don’t have the guts to do either,” Madeleine taunts Bleichert before he (in a major departure from Ellroy’s novel) murders her in cold blood. Madeleine dangles Bleichert’s sexual and moral impotence before him, and he responds with a typically explosive De Palma gesture, an impulsive release via revolver that is only momentarily satiating. A lap dissolve, joining Madeleine’s blood-soaked death mask with Bleichert’s tear-stained face resonates with unspoken guilt, a profoundly cutting emotional aftershock that Bleichert attempts, quite futilely, to fight.

What follows is, for me, one of De Palma’s greatest endings, revelatory in ways that have forced me to rethink my overall lukewarm reactions to his male-centered works (a direct result, I believe, of how brutally and honestly he strips down the male psyche to its rawest, most unfettered state). As if in mock ascension, Bleichert climbs the stairs of the home of his late partner (to whose death he was an unwitting and somewhat guilty witness) to rendezvous with Kay (who has already confessed her fair share of destructive secrets). Her glowing red lips framed in a lateral window (echoing both Hugo’s hero and Ellroy’s muse), Kay is a literal vision of transcendence when she slides open the front door, bathed in glowing, welcoming white light. Bleichert pauses at the threshold, his narration ended, the past caught up to the present. (It is my belief that Bleichert’s recollections—the film we have just seen—occur here, in the momentary space of his mysterious shared gaze with Kay.) And then Betty Short appears behind him, lying naked and mutilated on the lawn, a cawing crow poised at her head to frighteningly hammer home the universe’s point. Bleichert shuts his eyes and Kay’s heavenly radiance quickly fades (cinematographer Vilmos Zsigmond’s grainy, sepia-toned palette returning with a harsh and caustic vengeance). Bleichert turns back to face her, eyeing Kay uncertainly, lost in some unknown, though clearly distressing headspace. She breaks the silence, imploring, chillingly: “Come inside.” He steps over the threshold and she shuts out the world, the external horror vanished and vanquished for now. Gone… until that next moment (wonderful, horrible, inevitable) when the lights go down.