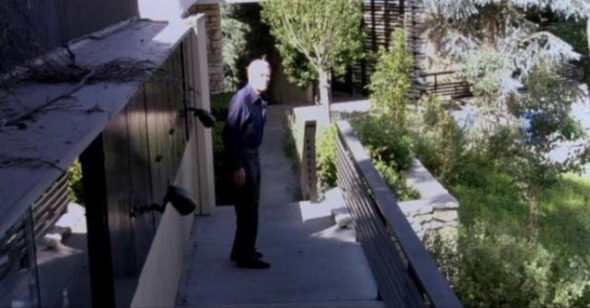 Shooting to Kill
Brendon Bouzard on Bowling for Columbine

Putatively, Michael Moore’s Bowling for Columbine is about gun violence in America, and whether or not there’s a connection between institutional and illegal violence—do America’s wars abroad correlate in any way to criminal acts of violence within its borders? But is that what it’s really about?

Bowling for Columbine is, more than director Michael Moore’s mildly subversive programs TV Nation and The Awful Truth and the powerful opening credit sequence to Fahrenheit 9/11, an indictment of televisuality—the compartmentalization of the American mind into a mirror image of a picture tube. The stark, ugly video montages demonstrating how television institutionalizes a mindset are the picture’s greatest and most frightening moments. Stolen clips of absurdity and unintentional profundity lost in the washed-out haze of the media flow. And yet the film’s own uneasy relationship with the exploitative elements of televisual and cinematic address—its Manichean with-us-or-against-us schematics—are its greatest trappings. Divorced of pithy applications like “liberal” and “conservative,” the film is most useful not as polemic but as personal essay: here we are presented with Moore himself, his own favorite subject, a man trying desperately—and all too often failing—to escape the image machine.

All of these tensions come together in a single cut near the conclusion of the film. Having badgered a brain-ravaged Charlton Heston into unintentionally making some racist remarks for the camera, Moore, recognizing his own structural impulses (placing the big embarrassing interview at the end of the film), delivers the obligatory final confrontation. Chasing after Heston, he asks the actor to turn around and look at a picture of Kayla Rolland, a six-year-old shooting victim from the director’s hometown of Flint, Michigan:

A point-of-view shot, Heston turning to look, his withered frame isolated in the center of the image like a criminal’s. Moore, off camera, says with a sort of conscious self-effacement, “Mr. Heston? Just one more thing… This is who she is.”

Cut to a medium close-up of Moore holding up the picture, her innocent face gleaming up from behind a matte veneer. “Or was. This is her.”

Where to start with a cut like this, a cut that explodes questions of documentary mode, genre, and the construction of personal narrative? Let’s begin with the obvious: the cut is a classic variation on the shot/reverse shot. Here our point of identification is multiplied—it’s Michael, our Hero, confronting Heston with an indexical emblem of fallen youth borrowed from the six o’clock news: the school photo. It’s also Heston, turning and seeing the error in his ways. Our moral narrative is resolved.

But let’s continue a bit further and think about the staging of these two shots, which favors Moore. Heston is filmed in long shot, in a manner that forces us to come to grips with his damaged physicality. He is sickly, trapped within the exterior pathways of his spacious Beverly Hills home and overexposed by the sun (to describe this sequence as “exploitative” would be an understatement at best). Contrast that to Our Hero, filmed from a low angle (so as to suggest his strength) and in close-up, allowing us identification. His portly, stubbly visage may not be that of Randolph Scott or the Duke (all the better—he is the Everyman!), but Moore is placing himself here in a sequence cut plainly from the classical Hollywood western. Instead of a gunfight, the final duel is one of competing visual systems—the classical Hollywood hero and icon of conservativism taken down by a school photo signifying the brutality of an America plagued by gun violence.

Whether or not Moore’s crib from westerns is intentional is unimportant—what is plain in his use of genre-derived technique, however, is his unflagging inability to escape the very modes of oppositional visual discourses present in much of the media he critiques in his own work. That we’ve been presented with Heston confronting his own wrongs is really, in the end, unimportant. What’s more important is that he’s been caught on camera—like Cops, which Moore critiques in depth during one segment of the film—the primary mode of attack is the camera itself, the visual recording of Transgression paraded for the morally outraged viewer. For all of Moore’s textual concern about guns and missiles, the camera proves the most dangerous weapon of all.

This raises a more important question: How’d they pull off this pair of shots? In order for this sequence to actually occur in real time, there would have been a second camera positioned at the bottom of the stairs to perfectly coincide with Moore’s climactic gesture of confrontation. But it’s not there. It’s clearly not in the shot before it, nor is it in the shot after, where Heston continues shuffling off, looking like a puppy dog kicked in the teeth.

It’s not there because there was no camera there to record the epic moment. Instead, Moore faked it a few moments later, probably instructing the cameraman to get a close-up of ‘his good side’ to serve as what he knew would be his film’s defining moment of the text. I don’t, and you shouldn’t, have that much of an ethical problem with this—the history of documentary is littered with hundreds of incidents of set-ups, reverse-shots, and coverage added later, but it certainly gives insight into intentionality. Michael Moore is without a doubt a compelling storyteller and essayist, but has he come to grips with the possibility that his brand of documentary is formally inseparable from the very modes of televisuality he seeks to rebuke? 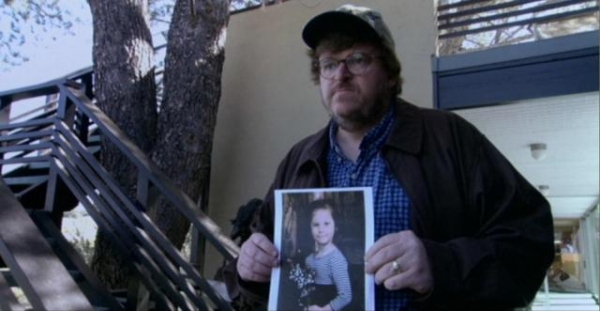