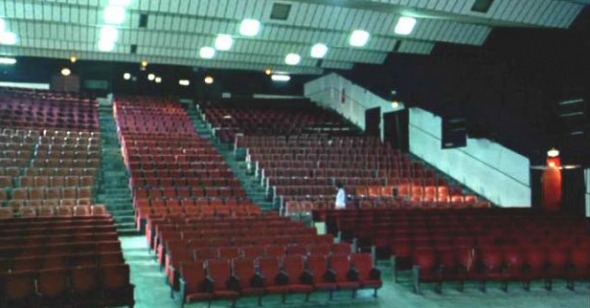 To describe is, always, to mislead. Words have their own logic independent of the impressions they convey, an enclosed system of meanings which the subject of description itself often has trouble penetrating. That's a truism, of course, but an important one. And it's particularly crucial when discussing the work of Tsai Ming-liang, for he seems so susceptible to the confining rationale of words. Sadness, Despair, Loneliness, Isolation, Alienation—certainly, Tsai's films are “about” such things, and precious little else. His themes are as limited as his fixed shots and recurring obsessions (water, empty spaces, Sixties pop songs, tentative homosexuality, Lee Kang-sheng, and Tien Miao). Tsai doesn't simply observe his straitened universe, he names it. Just consider the titles: The River (1997), The Hole (1998), What Time Is It There? (2001), The Skywalk Is Gone (2002)—objects, places, things. The short list of unquantifiables cited above is given definite form in Tsai's films, not as metaphor but as outright embodiment.

Narrow though the films are, they are never reductive. If interpretation and ambiguity are nearly nonexistent, mystery is never absent. In fact, the films are more mysterious by way of their reduction. The cut-and-dried schema of The Hole—the human and material decay of a world slowly coming to an end contrasted with the eerie, flamboyant musical numbers performed in the halls of the crumbling apartment complex—casts a spell precisely because the symmetry is so patently obvious. The banal shape given the dreams of transcendence—much like Henry Spencer's romance with the woman behind the radiator in Eraserhead (1978)—makes the muted desires they express that much more poignant. The emotions are so urgent, so powerful that only the simplest of forms can even begin to convey their immeasurable depth.

This is the metaphysical tension at the heart of Tsai's determinedly physical world: the impossibility of giving form to the unending complexity of human longings and the impossibility of not doing so. Tsai's films touch truth by misdirection, plunging directly into the distortion that occurs when unutterable yearnings are given name and the name made flesh. Tsai's world is slowly disintegrated by the relentless physical logic which gives it form—the skywalk vanishes, Kang-sheng's neck pain grows ever more unbearable after his immersion in the river, that hole gapes wider to the accompaniment of fossilized pop songs—and thus unveils the incomprehensible forces behind that logic. The deadpan “miracle” which caps What Time Is It There? carries such a charge because Tsai breaches, or allows to be breached, the ironclad corporeal laws which he himself has constructed, and plants an inexplicable force squarely within the concretized time and space of those long, held shots.

In Paul Schrader's transcendental terminology, this is the “decisive action” which he locates in Ozu, Bresson, and Dreyer, “a totally bold call for emotion...within a factual, emotionless environment.” Yet that decisive action as performed by Tsai is less a transcendence of the quotidian than a transubstantiation of desire. He pulls the higher forms back down to earth, grounds them in terrestrial bodies; his blank characters are evocative precisely because they are so unable to bear the weight placed upon them. The sometimes humorous, sometimes chilling absurdity of their predicaments reflects the larger absurdity (and painful necessity) of human beings searching for the unknowable and unseeable in the known and visible world before their eyes.

What Tsai seeks is a transference, a materialization of emotion through the medium of the cinema. In Tsai, states of being are made physically coexistent with the beings that possess them; like humans, they as well are objects in time. Yang Kuei-mei's tears in the final shot of Vive L'Amour (1994) are less the expression of a private grief than an essentialization of Sorrow. Emotion becomes here a physiological curiosity which Tsai isolates from its surroundings by lengthening the time in which it exists and thus, paradoxically, “stopping the clock.” In Tsai's films, the decisive action does not leap beyond space and time, it hangs in place and present. For a comparatively brief but extraordinarily long moment, we are suspended in an eternal here and now—which must, nevertheless, come to an end.

Seldom has Tsai carried real-time brevity and movie-time longueurs so far as in Goodbye, Dragon Inn (2003), and that, indeed, is its only visible sign of progression. A theatre in the rain, an old film—King Hu's wuxia touchstone Dragon Inn (1966), naturally—playing to a silent audience; a mousy, clubfooted ticket-taker (Chen Shiang-chyi) slowly making the rounds of the leaky building, covertly searching for the elusive projectionist (Lee Kang-sheng); a young hustler (Kiyonobu Mitamura) futilely searching for a pickup; an old man (Tien Miao) and young boy, bridging the generations; a mysterious Japanese tourist who flatly remarks (in one of the two dialogue exchanges in the entire film) “Did you know this theatre is haunted? Ghosts”; an appropriately ghostly, bare-footed woman (Yang Kuei-mei) fixedly chewing her way through an endless bag of peanuts; the gate being pulled down over the entrance, a “Temporarily Closed” sign pasted on the marquee, a resigned comment “Not many people go to the movies anymore”; a slow shuffle home through the rain to the tinny strains of an old love song.

In a bare 82 minutes, Tsai dashes off every facet of his private universe in shorthand, its human, material, and narrative totems made depthless and rigid, its nostalgic iconography comically blatant, its emotional affect purposely dulled. The familiar elements are deployed with such stringent economy that they are nakedly self-evident. Who would need to “figure out” Goodbye, Dragon Inn? What could be said about it that isn't imprinted directly on the screen? Tsai's little urban fairy tale has no reach, nor any wish to reach, beyond the confines of its own cloistered world. The determinism that rules Tsai's cinematic cosmology has finally conquered, imprisoning its expressiveness within the physical rectangle of the movie screen. And it's for this reason that Goodbye, Dragon Inn represents the apex of Tsai's work so far, though it's difficult to conceive that Tsai could take his remarkable aesthetic any further. For he has finally, fully achieved the mystical stasis towards which all his films have been working. The emotional affect is no longer thematic, but experiential. No longer simply the medium for the materialization of emotion, film—this film, any film—is the resulting object of that materialization as well.

Yet this transference only occurs by way of a decisive action: our watching of the film, and its watching of us. The fantastically elongated shots—the longest, of the emptied theater stalls at the film's conclusion, clocking in at a full five minutes—stare back at us, envelop us in a shared world. Tsai's preternatural simplicity wondrously collapses the spaces between viewer and viewed, depicter and depicted. Hu's Dragon Inn is Tsai's Dragon Inn, the former's simplistically indexical heroes those of the latter's, the screen that which we watch, the packed theater glimpsed early on through a curtain the space in which we sit, the inexplicable dwindling of the audience to a few lonely souls each of us in our solitude, the cavernously empty theater at the end that space after our departure—the ghosts, ourselves. The yearnings which Tsai once embodied on screen are given body in those who watch that screen, the finite running time of the first a premonition of that of the second, yet both, for this one moment, experiencing a shared eternity, a shared infinity. Reducing his meticulous minimalism to the brink of nothingness (Ozu's mu), Tsai has—perhaps just this once—touched on the shores of Schrader's transcendental triumvirate. In apparently losing its soul, Tsai's cinema has gained the world, our world. The projector flickers upon screen and audience both, embracing them with a sweetly inconsolable sadness beyond images, beyond logic, beyond words.