The Skywalk Is Gone 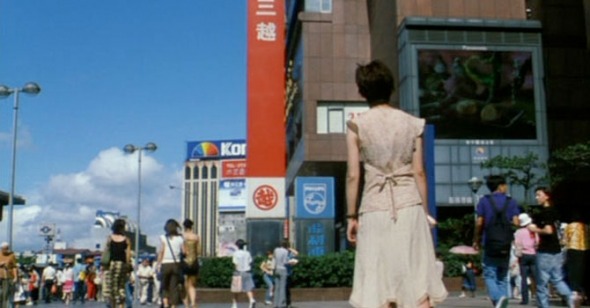 Thanks for the Memories
Jeff Reichert on The Skywalk Is Gone

Tsai Ming-liang says that he makes films with narratives that can be explained in no more than two sentences. It's a rather cavalier statement coming from a filmmaker whose relatively small body of work has inspired thousands of sentences in hundreds of publications (including, of course, this one), but I think it betrays the spirit of humility so prominent in those films and the man himself. I'd imagine Tsai bemused and more than a little bit flattered at the time and verbiage critics have spent dissecting these “two sentence films” in the service of elevating him to the forefront of ranks of world cinema's auteurs. His 2002 short The Skywalk Is Gone feels like Tsai giving a little bit back, to his audiences, his admirers, and his characters, reuniting (almost) the temporally split lovers, Hsaio-kang (Lee Kang-sheng) and Shiang-chyi (Chen Shiang-chyi) from What Time Is It There? Our two-sentence story: “Lee Kang-Sheng and Chen Shiang-chyi walk past each other but don't recognize each other. That's it.”

While this captures the basic thrust of the film, to leave matters there would be to pass over 25 minutes bursting with small pleasures. Watch a puzzled Shang-chyi, freshly returned from Paris, pause in the middle of a giant, crowded square, once the site of the skywalk where she shared a brief moment with a shy watch salesman, now dominated by jumbotron screens, flashing advertisements, and wired teenagers. Skywalk gone, she attempts to cross the busy highway illegally, suitcase in tow, following the lead of an older woman. Of course, they're both accosted by a police officer for jaywalking and the episode quickly devolves into Tsai's patented brand of absurdity. Or, witness Lee Kang-sheng take his first tentative steps into the porn stardom that is the focus of Tsai's next film, The Wayward Cloud.

But the crucial event is the aforementioned “almost.” It comes in the kind of moment heavy with possibility that Tsai conjures up so easily, and that Nora Ephron and her cottage industry has been trying unsuccessfully to cop from Lubitsch for years. The two pass each other briefly on an escalator leading to a public bathroom without noticing. And yet, as he reaches the top, Hsiao-kang turns…is it a glimmer of recognition? We can't tell-he's at the top of the escalator, silhouetted by the sun, but the potential of the instant is palpable. Tsai may have taken a break from art cinema's new favorite love story to hang out in a haunted theater for a while (which we here at RS certainly won't begrudge him), but given the tease of Skywalk and the tantalizing bits of information circulating about The Wayward Cloud, I think it's safe to say there's a new most-anticipated film from Asia in the pipeline, and it's not directed by Wong Kar-wai.