It’s Impossible to Learn to Plow by Reading Books 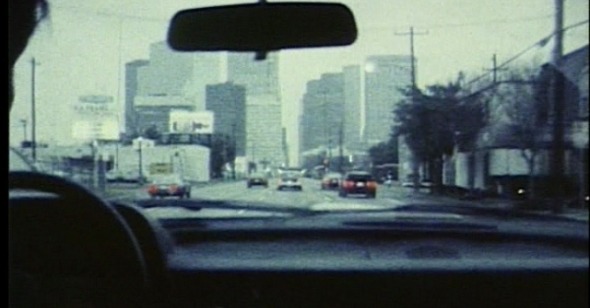 For a movie that was directed, photographed, edited, written by, and stars Richard Linklater, It’s Impossible to Learn to Plow by Reading Books is remarkably free of ego. Composed of a series of static tableaux recorded by a camera that was apparently left unattended during filming, yet despite the unblinking focus on its lone protagonist, the feeling is more objective than subjective, with the camera seemingly as interested in its surroundings as the unfolding story.

The determinedly meandering story of a Texas college student who takes an Amtrak trip to Missoula, Montana, to visit a friend, returns home, goes to Huntsville to housesit for his mother and care for her dogs, and returns home again, is set in an underpopulated, distinctly American landscape that makes Edward Hopper look downright cheery. There is little sense of urgency; instead, there is always time to hang out with friends and watch a movie on television, go to the laundromat, talk on the phone, or wander down to the supermarket.

While the milieu may seem ripe for the angst-ridden alienation effects common to first films, the tone is more gentle than ironic. Where Jim Jarmusch’s Stranger than Paradise (an obvious influence, although Monte Hellman’s Two-Lane Blacktop may have spawned both movies) achieved comic effect by punctuating its long takes with vaudeville blackouts, Linklater’s shots are quiet and uninflected. The single-system Super-8 sound is unmixed and its omnidirectional quality creates the aural equivalent of Bazinian depth-of-field providing the film a rich texture that belies its apparent minimalism.

The film opens our eyes and ears to all manner of quotidian pleasures. The shots of Linklater brushing his teeth, boiling water on his stove, sitting on the floor of a train station, staring out a rainy window, aren’t transitions between key scenes, they are the key scenes. Plow, and Linklater’s subsequent movies, are about people who would like to remain in that suspended state of contemplation and possibility that occurs sometime after college and before the routines of career and marriage. If he had his druthers, Jack Black’s character in School of Rock would lie in bed much of the day, waking only to hang out with friends and play music. As Ethan Hawke’s young aspiring writer in Before Sunrise steps off a train to wander the streets of Vienna with a stranger (a beautiful French woman though it may be), he’s well aware that he is unlikely to have many such days as he grows older. Even The Newton Boys, about the exploits of a real-life band of bank robbers, revels more in its quiet scenes of the young outlaws hanging out—even taking the time to see Greed at the local Bijou—than in any “action-packed” heist scenes.

Since his official debut film Slacker, made four years after Plow, Linklater has been known for finding ways to resist conventional narrative. He may use a sharply defined time frame as a structuring device, but within this, he locates detours, chance encounters, dreamlike connections, and downtime. As Plow indicates, this idea of narrative structure reflects an idea about how life should be lived.

The title is not a call to action; the message is not “put down your books, get out there and do something useful.” As with Hal Hartley, Linklater loves to show characters who read books, see movies, and talk about them; he understands that books are part of life, not something separate. Instead, the idea is that there is much to learn from physical experience, from listening and observing the most ordinary physical activities. Wherever You Go, There Are You, could be an alternate (and heavy-handed) title.

Plow is the least talkative of Linklater’s movies, the one that most embraces the sheer pleasure of observation. Linklater’s performance onscreen is almost entirely without affect, and much of the action consists of him listening to other people talk, and doing things they suggest. At one point, he plays an audiocassette letter from a friend, who complains with bitter sarcasm at the drudgery of his dishwashing job, and of his horror about a co-worker who has been at the same restaurant for more than a dozen years washing dishes. This hapless dishwasher could stand in for any adult with a settled routine. It is the freedom to travel aimlessly, to simply exist in the world without daily responsibilities, that Linklater’s characters treasure most. Plow is his most direct embrace of this freedom.