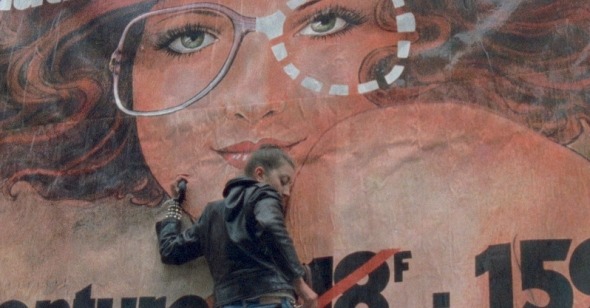 Serge Daney once described Le Pont du Nord as the first French film of the eighties, suggesting that it marked the beginning of a new period in which the filmmakers that had burst onto the scene in the sixties returned to their roots, “to the fictive and documentary Paris which was the theater of their debuts.” By 1981, however, the Paris of Jacques Rivette’s early work had become something else.

The film certainly squares with the director’s established vision of the French capital, one of labyrinthine sprawl and open-air conspiracy, but it also sets itself apart from the get-go with an opening sequence that involves a return to the city that is under suspicion—not the same as it once was. The camera pans across the Place de la Porte de Montreuil, a knot of motorway congestion at city’s edge where dozens of cranes hover like Titans in the skyline. Biker girl Baptiste (Pascale Ogier) scans her surroundings and takes in the screeching and clanging of vehicles before proceeding into battle with the new “Babylon”—a battle that her soon-to-be stumbled-upon soul sister, Marie (Bulle Ogier), proves unprepared for. Freshly released from prison, Marie, a claustrophobic bank robber formerly involved with a radical political group, is dumped near the Place Denfert-Rochereau, dazed and directionless after several years in temporal stasis. Fitting that just beyond Denfert-Rochereau beckons the entrance to the Paris Catacombs, that menacing underground maze and repository of history. This is a Paris that seems to mock the title of Rivette’s first feature: if Paris belongs to anyone or anything, it belongs—is beholden—to time.

Le Pont du Nord makes a point of capturing an other Paris, something more aligned with the “modern” as we know it, a place of endless construction and concrete efficiency as opposed to the vintage Paris of even ten, twenty years earlier, then still clinging, if only by its pinky fingers, to a mode and style forged by the textures of public life. Since the mid-19th century and the upheavals of “Haussmanization,” architects and urbanists had been nibbling away at the city’s quirks and eccentricities in the name of functionality, with this ethos of productivity kicking into overdrive during les Trente Glorieuses. That economically prosperous period between 1945 and 1975 saw the ascendance of a technocratic elite with dreams of a future Paris draped in superhighways and glass buildings. By 1977, the French historian Louis Chevalier had declared the city’s death with his provocatively titled book The Assassination of Paris. When Rivette began production on Le Pont du Nord in 1980, he first completed a short film using footage shot for the feature. It was called Paris s’en va. Paris disappears.

Yet there is something markedly alien about the Paris to which Baptiste and Marie return. Intuition distinguishes the way in which Rivette’s characters inhabit the worlds of films like Out 1 and Céline and Julie Go Boating, but such an intimacy is betrayed in Le Pont du Nord. Before crashing into Marie for the first time, Baptiste circles around several stone lions scattered across the city, a few in the 11th, then the 3rd, 4th, and 14th arrondissements. These spatial leaps are edited together in a montage that implies continuity when, actually, these moments are assembled collagelike, woven together by the lions, who seem like spies perpetually on the lookout. Out 1 features a map of Paris divided up like a pie and assigned to multiple characters whose names are scrawled on the sheet, but the map of the city in Le Pont du Nord, taken from a news clippings-filled briefcase swiped from Marie’s lover and the shady men with whom he consorts, contains squares that divvy the city up into a boardgame-like spiral. This “Game of the Goose” parallels the structure of the film as a sport of pure chance, which the two women throw themselves into with childlike glee and sincerity.

Le Pont du Nord is more geographically busy and convoluted than any of Rivette’s other films, with Baptiste and Marie popping up near iconic attractions as well as sterile, depopulated places on the outskirts destined to be or already torn down for renovation. At one point, we see Marie perusing a gift shop, plucking out a few postcards with images of landmarks, like the Arc de Triomphe, that will appear later in the film. These places coexist as two-dimensional corner-shop souvenirs and three-dimensional sites of real intrigue and romance (we see Marie kissing her beau atop the Arc from Baptiste’s perspective), yet the Game of the Goose ultimately leads the women away from the touristic center and toward the city limits, from the long-defunct wine depot in the southeastern neighborhood of Bercy to the crumbling former slaughterhouses in northeast La Villette in the final act.

It’s true that Rivette is drawn to doubles, particularly pairs of women with unspoken but powerfully felt connections—Céline and Julie, of course, but also the sun goddess and the moon goddess who face off in Duelle. Le Pont du Nord features regular Rivette collaborator Bulle Ogier opposite her daughter, Pascale, putting women from different generations in tango with one another—the first having lived through and experienced the upheavals of ’68 and onwards, and the second, born of the first, remembering little of those years yet feeling them in her bones. Just like her character in 1969’s L’amour fou and her player in the perpetually replayed melodrama within Céline and Julie, Ogier’s Marie is ultimately a victim of a destructive love when her man betrays her and shoots her dead. At this juncture, the past and its dreams have been razed, yet they’re also resurrected in a different key.

Baptiste emerges triumphant. Always on her toes and seen throughout the film beheading skeleton dolls and ripping the surveilling eyes off the untrustworthy faces on street advertisements, she is attuned to the menace of her times, which Rivette materializes in the form of those leering lions and the mechanical dragon she slays near the close of the film. Hers is a generation that came of age in the ’70s and ’80s, when Japanese popular culture was all the rage and anime routinely played to awestruck adolescents on cable television; it’s appropriate, then, that Baptiste is such a devout practitioner of karate, her means of defense against the anonymous gangsters that populate the film and her method of communing with those treacherous forces—of winning the game. Her final showdown with one of the crooks evolves midway into a karate training session. The fight between two becomes a kata performed in sync on Le Pont des Abattoirs. Today, that bridge is gone.