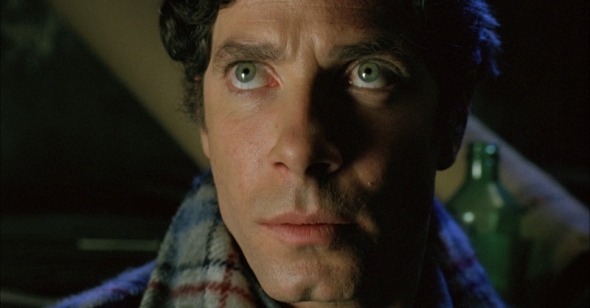 On the Verge
Chloe Lizotte on Scanners

It starts with an exploding head—or it was supposed to, until test audiences couldn’t recover. Yet the first major beat of David Cronenberg’s Scanners undoubtedly remained the image of a skull bursting from within after a psychic attack. The film arrived eight years after The Exorcist broke ground as a mainstream gross-out, which suggests that the shock of Cronenberg’s scene isn’t only the gore but also its implications. As another point of comparison, Brian De Palma’s The Fury (1978) sees John Cassavetes’s character blown to bits by ESP, but hilariously, his head and good looks remain intact in the blast. Scanners does the opposite in this first, infamous explosion: after the chunks of brain matter fall away, there’s only a bloody stump of a neck framed by the black void of a lecture-hall curtain.

The sight is gross, even philosophically unsettling—an obliteration of the mind, the locus of our perceptions—but it is also awesome. Fear oblivion, embrace evolution. This duality powers Cronenberg’s science fiction, all confrontations between human instinct and an uncontrollable future. Here, the future arrives through the concept of “scanning”: a dangerous, unwieldy form of ESP, a birth defect caused by an over-the-counter tranquilizer. The question on everyone’s minds—unifying our hero Cameron Vale (a magnetically wooden Stephen Lack) with our antagonist Darryl Revok (Michael Ironside)—is how to approach this new reality as it unfolds. There’s a labyrinthine web of government bodies determined to capture, study, regulate, and control the scanners; meanwhile, Revok leads a vigilante army of scanners on a killing spree—opening cranium-splatter included—toward world domination. In the film’s pulpy finale, Vale scolds Revok, “You murdered the future!” Still, Revok maintains that the only way forward is through. No one has ever made it out of a Cronenberg film by averting their eyes…or keeping their head.

Although Scanners was released in January of 1981, Cronenberg had a pitch ready around 1978, when he began principal photography on The Brood. Looking back, the intervening three years were all about flux, shaped by the recessions that would give rise to an ascendant neoliberalism in the ’80s and ’90s. Progressive energy from the ’60s and ’70s atrophied when diffused into mainstream politics, and a decisive death blow was around the corner in D.C. John Lennon was killed in 1980, and punk was giving way to post-punk. At the 1979 Academy Awards, The Deer Hunter may have won the most awards of any of the nominees (five), but just one year earlier, that distinction went to the first Star Wars film (six). Another 1979 Oscar-winner, Giorgio Moroder—Best Original Score for Midnight Express—swathed disco in a cool and clinical electronic sheen, a turn away from Saturday Night Fever’s Billboard dominance. This general mood courses through Scanners: the arbitrary, erratic convulsions of one moment morphing into the next.

Scanners also rests on a key precipice in the director’s filmography: Cronenberg’s final film before Videodrome, it’s the dividing line between his early films and his career-defining works. In retrospect, Cronenberg had been building up to Scanners since his first proper feature, Stereo (1969). A faux documentary about experiments on telepathic young people, Stereo is structured around its voiceover, icy fragments of observational notes and lab reports. The studies are conducted by the “Institute of Erotic Enquiry,” suggesting both consciousness-expanding retreats and the conspiratorial web surrounding LSD research programs. Already, Cronenberg is more compelled by the implications of telepathy than its practical applications. Long before the dry-coughing Viggo Mortensen of Crimes of the Future admitted he was useless at “the old sex,” the characters of Stereo reflect on how their physical sex drives have been altered by their psychic connections—one remarks that simply concentrating together on the idea of each other’s bodies is more erotic than physical contact. In this first film, Cronenberg lets questions accumulate like a haze: at what point in a mutation do we remain recognizably human, something else, or somewhere in between? Will we look back and laugh at our quaint fear of change, or is that what makes us us? Are these even the right questions to ask? This dynamic is why corny, gore-packed pastiches of Cronenberg’s work often feel very far afield, despite the best efforts of the direct-to-video Scanners sequels.

Scanners begins as Vale, homeless and anonymous, is plucked from a drab mall. After he telepathically induces a seizure in a snooty woman at the food court—a self-protective reflex, hearing her call him a “creature” to her friend—he’s whisked away to an abandoned brick building, the interior of which evokes a bombed-out psychiatric hospital. Here, he meets the amply bearded Dr. Paul Ruth (Patrick McGoohan). He gives Vale’s powers a name, “scanning,” by demonstrating them; as a crowd of people files into the building, Vale is overpowered by the confluence of their thoughts, buzzing like an anxious audience before a concert. Ruth is the resident scanner expert for the government security agency ConSec, and he soon tasks Vale with a video-game–like mission: now that Revok is on the loose, Vale must hone his psychic powers and defeat the rebel forces. To introduce his mark, Ruth shows Vale an archival film of Revok interrogated about drilling into his skull to stop the voices—another quotation from Stereo. He’s drawn a third eye on his bandages to match the concentric circular scar beneath.

So far, Ruth’s description of scanning holds true: that it is pure “agony…yet also a source of great power.” Though these words might suggest a hint of optimism, maybe even a nobility of purpose, the depth of this pain invites a literal interpretation of “great.” Ruth attempts to train Vale by plopping him down on a yoga mat opposite a seasoned scanner—a dead ringer, no pun intended, for Ram Dass. Vale is to gradually increase the other man’s heart rate, an attempt to induce a “direct linking of two nervous systems separated by space” (no description can do justice to McGoohan’s sonorous, staccato delivery). This, too, puts a rosy gloss on what is about to happen. Vale concentrates, and on the soundtrack—Howard Shore’s second of 18scores for Cronenberg—percussive electronic booms speed up, and synths whoosh and wail with greater and greater urgency. The other scanner starts convulsing, his heart beating wildly. Ruth screams at Vale to regain control. It seems that Vale’s powers are overtaking him—but are they, or is he surrendering to them like a vice?

Lack’s performance is a compelling cipher here: his monotone affect, his unreadable wide eyes. When he visits an art gallery filled with nightmarish, plaster-cast figures—the creations of another scanner, once an inmate of a prison for the criminally insane—Lack’s eyes seem to match the blank, gaping ones of the sculptures. At one point, he’s warned that Revok’s people could turn him into a robot, a killer; Vale may be the “good guy,” but he’s not so far removed from these other categories. That would be easier to explain away if Vale were something like a replicant, but instead, he complicates just how distinct from one another—how socially constructed, how imagined—these identities are. This is less of a moralistic quandary than a thought experiment about human nature. For its part, Shore’s score commingles an orchestral string theme with synths evoking human screams, suggesting Georges Delerue’s elegiac Contempt music reworked for the age of the man-machine.

In essence, scanning is a bodily new advance in communications technology, which overlaps with a zeitgeisty set of anxieties. Although Cronenberg studied at the University of Toronto in the mid-’60s, he never took a class with one of its most famous professors, Marshall McLuhan. Still, his films are shaped by related preoccupations. In 1964’s Understanding Media, McLuhan writes that machines create “extensions of our central nervous system” and contends that technology chiefly “shapes and controls the scale and form of human association and action,” from communication to transportation. (Cronenberg’s savvy casting of McGoohan also invokes his 1967 TV series, The Prisoner, a McLuhan-esque study of a government surveillance experiment.) Most importantly, McLuhan wasn’t a techno-utopian. As technology rewired possibilities for interaction, McLuhan anticipated dramatic cultural implosions—not good or bad, per se, but inevitable.

Scanners models these cultural implosions—or literal explosions, as when Vale blows up a computer over a telephone line—to explore their consequences on the human nervous system. All of this provokes anxiety in the security taskforce at ConSec, predictably hoping to weaponize the scanners for state gain, but always objectifying the group as “freaks.” Rather than sequester these outcasts as “the other,” Scanners circles the chaos inside of them, if never quite reaching it. At one point, we meet a twitchy artist who has sought solace off the grid. He’s created an enormous sculpture of a human head: gray face, blank eyes, gaping mouth, and a squishy brown interior that resembles the memory pod of Alain Resnais’s Je t’aime, je t’aime. Like Revok with the drill, he seeks to escape the painful intrusion of the voices; appropriately enough, this artwork is the visual equivalent of a lobotomy. Later, Vale joins a small group of scanners attempting to “scan together” in a sort of controlled group meditation, all of them exchanging thoughts in voiceover: the experience is distressing, “beautiful and frightening,” “so frightening to lose yourself to the group will, group self.” Scanners crests on this loss of control—the sense that things could evolve in any direction, unforgiving to an individual sense of self.

In both Cronenberg films named Crimes of the Future—1970 and 2022—characters compare the interior of the human body to solar systems, outer space. We live in these vessels, but we can’t look under the hood for simple clarity. Likewise, Cronenberg’s work descends into the gap between Ruth’s speech and Vale’s behavior: the dissonance between a messy present and any feeble attempts to interpret it. And yet, we’re driven to ascribe some meaning, resist that insignificance—a source, in Scanners, of bodily horror. When a computer blows up, it’s heat, smoke, and sparks; when a person blows up, it’s something else entirely.

When Vale and Revok finally face off, the sequence delivers Scanners’s second lasting image: Revok screaming, his eyes rolled back to whites as his flesh pops, bubbles, and smokes like exploding circuitry. Just before, we’ve learned that the two are actually brothers—the twin sons of Ruth, who was responsible for the inciting pharmaceutical accident. The revelation functions less as helpful, clichéd “backstory” than as the final collapsing of their differences: this duel pits Vale against the abject. Revok embodies scanning at its most bloodthirsty, but he also augurs a state of change, a movement into a future where the current laws don’t apply. Vale tries to overpower him at first, but the only way to win is to merge, to embrace that fear, to dissolve the boundary between the self and the other. Vale’s body ends up charred to a husk, but his consciousness slides into Revok’s skull. His eyes open to reveal those cold, blue beams. Long live the new flesh: written in viscera before Cronenberg found the words.