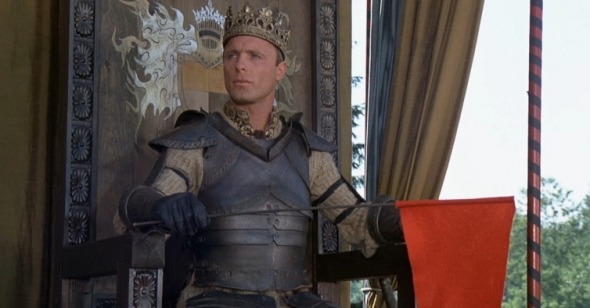 Near the close of George Romero’s two-and-a-half hour, ramshackle epic Knightriders, the Pledge of Allegiance, being delivered by a bunch of tow-headed grade schoolers in a small classroom somewhere in central Pennsylvania, is interrupted. Something more important than the dutiful recitation of this mantra offering fealty to an idea of a nation needs to be completed. A grievous wrong needs to be made right. Just as the words “in liberty” die out in the air, before “and justice for all” can join them, a bloody, dirtied knight enters the room. Sir William (Ed Harris) looks around for a moment, spies a nerdy young boy, strides over to him, and hands the child his sword and sheath. He grabs the astonished kid by the hair and gently shakes his head before marching back from whence he came. “Excuse me,” he offers as he’s out the door.

These two had met some days prior when the boy asked Sir William for an autograph, but the famous knight, suffering an ongoing crisis of conscience about his purpose in the world, awkwardly rejected the lad. It is left unclear exactly how, some days later, Sir William has found his way to this school, but in the logic of this film, a unique object in American movies, these concerns matter less than the gesture, the wordless transference, the doing of the right thing to make up for a mistake. We can pledge our allegiance to flags all we like, but there are some ethics that exist on a higher plane.

Bronx-born, Pittsburgh-forged George A. Romero is the possessor of one of the odder filmographies in American movies, and Knightriders, which trades undead hordes and jump scares for gallant knights and plainspoken earnestness, is an outlier. Yet as is so often the case with the odd ducks of artistic output, this tale of a group of knights trying to maintain their community and code amidst the myriad forces arrayed against them, is a work that brings us closest to how its creator views the world. The film’s narrative was initially planned to be fully set in Medieval times, but it was updated to the present day following commissions Romero completed for racing documentaries (before his death in 2017, he was planning Road of the Dead, blending zombies and NASCAR). The result is something deeply strange: Knightriders is not not an Arthurian epic full of bravery and chivalry, questions of loyalty, intimations of magic. But, by dint of the fact that its heroes and villains all wear chintzy tinfoil armor and perform on motorcycles in tourneys staged in decrepit fields across Western Pennsylvania, in front of conglomerations of ’80s Americans, sloppily gross and skeptical, deeply reverent and every shade in between, the film exists as some uneasy hybrid. It’s as if the Easy Rider cast decided to form a traveling Renaissance faire to act out scenes inspired by John Boorman’s Excalibur (also a 1981 release, incidentally).

It’s a constantly head-spinning work. Consider how Romero confuses our eye in frame after frame: we often see men and women clustered together in antiquated tents, wearing outdated garb and armor, but wielding power tools or modern medical equipment. Where are we? The film’s opening scene, which finds Harris and his “Queen,” Linet (Amy Ingersoll), lying nude in a primeval forest before morning ablutions, feels singularly out of time. As a horn fanfare swells on the soundtrack and the pair don their crowns, we could be watching a depiction of Arthurian legend ripped straight from the Boorman film down to the misty, sun-dappled cinematography, until Romero wittily lances the scene: the two mount their steed, the fanfare moves to a higher, more triumphant key, and a pointed cut to a wider angle reveals they’re actually seated on a motorcycle, engines revving. It’s silly and sublime, and it’s hard to know whether to laugh or cheer moments later when the opening title lands over a medium shot of Sir William in full armor, visor down, his Queen wrapped behind him on his hog as they barrel down…I-80?

They are headed back to the ad hoc community of which Sir Will is the leader, though it is made clear early in the film that his leadership has been less steady of late. Knightriders is structured around three different tournaments, with short scenic interludes. Though this adheres to traditional three-act scripting, this conventionality is only on the surface. There’s an oddness tothe film’s narrative rhythms that cannily mirrors how Romero unsticks us in time. These sessions of combat (which feel dangerous and human in the way the action cinema rarely has since the ’80s) are performances for paying audiences in the film, but they are also structured to further story, unpack relationships. And they play out in something close to real time. The first contest, which runs nearly an hour in length, nimbly establishes the film’s world and central conflicts: Romero’s camera bounces around between different members of the troupe and audience, outlining simmering inner tensions between noble, near-messianic Will, and his antagonist, Morgan (Romero regular and special effects maestro Tom Savini). When Morgan bests his liege in a one-on-one contest, knights rush to Sir Will’s aid, to protect him from having to yield the crown. It’s a further confusion of elements: yes, this gang is performing, for an audience, but as we come to learn, this defense of Sir Will has real stakes for their community and how it functions. They’re actually trying to live by chivalric codes at the turn of the 1980s.

This is crucial to the pull of Knightriders and what makes it emergence in 1981 important: this group of travelers has decided to exit a society clearly headed in a certain direction for a different way of life. In the intervals between fighting, conversations reveal the troupe to be a remarkably progressive one for its day; theirs is a space where, around a campfire, a woman can ask a male friend frankly and without any whiff of judgment about his potential homosexuality, where members of multiple races commingle with ease and without comment, and where it's surprising to none that one of the toughest of the armored duelists is a woman. Today, one might be tempted to refer to what Sir Will and his band do as simple cosplay, but it’s clear in Romero’s careful examination of this community there’s something more afoot. After a disastrous second tournament, with members of the group threatening to splinter off with a sleazy promoter for increased lucre, one of the group’s pages exclaims to the deserters, “Can’t you understand, this isn’t just a roadside carney anymore. Not for some of us anyway. It’s a lot more than that. A whole lot more.” The central tension is Knightriders is here: how close should one hew to an ideal; when, if ever, should one compromise; how hard must we fight to keep a fraying group together. Is true community even possible in late capitalism? It’s Robert Kramer’s Milestones with cardboard lances.

Knowing what we know about Romero’s jocular good nature, and how his filmmaking practice, with its merry band of regular craftspeople and performers, mirrors the chosen lifestyle of his subjects in Knightriders, it’s unlikely that the film’s earnestness good spirit was an addition made with the modernization of the original scenario. Yet the present-day setting lends the struggle forsurvival of this small group increased poignance. Instead of operating in the realm of metaphoric fantasy, Romero’s transplanted his inquiry about concern and community into one of America’s most crucial turning points. The filmmaker’s zombie films are well noted for their social commentary: race, consumerism, the jaundice of our politics. But in none of his films can we locate such a sweeping attempt to diagnose a massive societal shift. (Its closest cousin in this regard might be Romero’s earlier, quite awkward There’s Always Vanilla.) Reagan was on the march during this film’s production, but we can find rolled into the story of these knights echoes of the dashed hopes of the ’60s and Vietnam, Nixon and Ford and the ignominious days of the late Carter administration. With all this baggage, it’s amazing more stout-hearted people didn’t try to find their own Sir Will and beat a similar retreat from the mores of the day. As much as, say, Visconti’s The Leopard, Knightriders captures what it looks like when a generation changes over, largely for the worse.

For all this, there’s a distinct lack of despair here, a recognition that evolution, good and ill, is the way of things. In Sir Will’s arc we might come to locate something of a quiet manifesto for continued resistance: he comes to realize that leadership is tenuous, and should not be held onto forever. For his community to continue, he needs to vanish from it. Towards the film’s end, at the third and final combat, Romero mounts one of the most emotionally dense and affecting scenes in his cinema. This bout, with the crown at stake, is played out for the troupe alone, with no spectators. And in it there’s true joy for the first time in the film. Following the defeat of Sir William’s standard-bearers by Morgan, Harris places the crown on the head of his nemesis. Yet it’s clear in the moment that their antagonism has been largely illusory. This group has no real heroes or villains, and Morgan’s desire to win the crown signals his commitment to furthering their ideals. This moment of change is not one of capitulation or sacrifice but of renewal and continuance. Romero wordlessly distills this swirl of emotions simply, via shots of faces, and you might find yourself laughing at the earnestness of it all while crying and unsure exactly why. It’s this rich complexity and unwillingness to cast judgment that all but ensured Knightriders would be a financial dud. But it’s this same open heartedness and cinematic elegance that lands the moment of transference at the film’s end, when a knight enters a classroom, and interrupts a meaningless pledge in favor of honoring his allegiance to something greater.