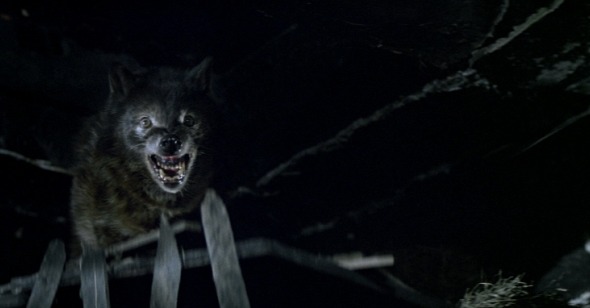 Released at the tail end of the year of The Howling and An American Werewolf in London, Michael Wadleigh’s Wolfen was easily dismissed as a late and superfluous entry in 1981’s werewolf movie sweepstakes. Ticket buyers expecting another helping of lycanthropy were likely disappointed, but more than a few were transfixed. Something unseen is stalking the streets of New York alright, but it’s not werewolves. The eponymous wolfen aren’t supernatural beings, they’re wolves—and not just any old wolves. Classify this urban margin–dwelling breed, with their superior intelligence and heightened perceptual faculties, as canus lupus sapiens. As one character puts it, “They can see two looks away. They can hear a cloud passing overhead.”

Loosely adapted from the 1978 novel by Whitley Streiber, Wolfen transcends the framework of its solid genre format to deliver an overarching and absolutely singular vision (both literally and metaphorically) of human civilization on the skids, one that brings together ecological, social, folkloric, and postcolonial perspectives. Former medical student Wadleigh’s reaching ambition comes as no surprise. His only previous directing credit, the massively successful rock documentary Woodstock (1970), and his background as DP on half a dozen independent films, including David Holzman's Diary (1967) and No Vietnamese Ever Called Me Nigger (1968), attest to his politicized counterculture background. As well as being an extraordinary depiction of New York at the dawn of the 1980s, Wolfen lives up to those ambitions—despite the extensive tampering of its producer, Orion Pictures, Wadleigh’s film should be considered one of the most remarkable and visually innovative Hollywood films to be released in 1981.

In a compelling precredit sequence, Wadleigh sets a lot of plates spinning. He opens with a shot of the Manhattan skyline not long after dawn, panning from the Twin Towers to the Brooklyn Bridge—a routine establishing shot were it not for James Horner’s ominous score. Two shots later, he introduces a pair of Native American men perched atop one of the bridge’s support towers, engaged in some kind of ritual. From here he cuts to a helicopter shot of the desolate wasteland of a South Bronx neighborhood. At street level now, we hear an amplified voice commence a demolition countdown, each number cueing a fresh shot of the decaying surroundings, until a condemned building collapses, the dust settling to reveal the skeletal ruin of a nearby church. Shock cut to a startling shot of the helicopter passing overhead from within the church ruins from the point of view of the wolfen, rendered in a stark high-contrast ultraviolet and black palette. Cut to another wolfen subjective shot, this time the color dramatically desaturated, almost electrically charged, observing from a distance, then magnifying a gathering of civic leaders attending a groundbreaking ceremony. The sound is distorted, unnaturally sharp, filtering out extraneous noise and amplifying the crunch of spade digging into soil as billionaire industrialist and real-estate tycoon Christopher van der Veer (Max M. Brown) breaks ground, the visual field narrowing to a ragged cameo, isolating him in a field of dense black. And finally, against jet black sky, a thermographic POV close-up of the smiling face of the man responsible for this brave new urban renewal project. In two-and-a-half-minutes Wadleigh has set the groundwork for a scenario in which New York itself comes to be seen as a contested space.

Wolfen is as much a police procedural as it is a horror film. “So, who got killed, the governor?” asks world-weary Detective Dewey Wilson (Albert Finney at his acerbic best). “Somebody bigger,” replies his boss, Captain Warren (Dick O’Neill), “Christopher van der Veer, heir to the fortune and maybe even the presidency.” Despite the oversight of Executive Surveillance Systems, a private high-tech security outfit, van der Veer, his wife, and their bodyguard have been slaughtered during an unscheduled late-night visit to a memorial dedicated to one of the industrialist’s colonial ancestors, a recreation of a Dutch horizontal windmill, located in Battery Park. Although the security company’s immediate suspects are terrorists, we have already seen the victims stalked and killed from the wolfen’s night-vision, heat-sensitive point of view in a skillfully choreographed series of Steadicam shots (Steadicam operator and pioneer/inventor Garrett Brown receives a solo card in the opening credits).

In his three-steps-behind-the viewer investigation, Wilson is assisted by police psychologist Neff (Diane Venora), a specialist in “motivated terrorist behavior,” but remains doubtful that terrorism is the key, particularly after Executive Surveillance Systems’ state-of-the-art computerized instruments for evaluating voice and temperature fluctuations covertly scan an interrogation subject and conclude that she’s lying about her involvement in the killings. (When it comes to monitoring a person’s heartbeat, breathing, and body temperature, and effectively reading their mind, technology comes in a poor second to the wolfen’s cognitive abilities.) Pathologist Whittington (Gregory Hines) and Central Park Zoo animal expert Ferguson (Tom Noonan) help Wilson start putting the pieces together: the victims’ wounds show no trace of metal particle residues normally left by knife blades, while matching hairs discovered on a corpse unearthed on a South Bronx demolition site and on van der Veer’s wife prove to be lupine in origin, with Ferguson observing that wolves “went the way of the Indians and the buffalo—the genocide express. Wolves and Indians evolved and were destroyed simultaneously. Their societies are practically one and the same. They’re tribal.” This leads Wilson to the top of the Manhattan Bridge to question sometime Native American Movement militant Eddie Holt (Edward James Olmos), who works “on the steel” and speaks of shapeshifting (“We do it for kicks. Turn ourselves into a different animal.”) Whittington meanwhile discovers that the discarded organs of eight South Bronx victims are all diseased and concludes that “Something out there might be eating people—but not eating those. And how did they know they were diseased? It took me 24 hours to find that out.” He’s also identified similar cases in Newark, Philadelphia, and New Orleans.

Meanwhile, as the saying goes, the hunters have become the hunted. After Wilson and Neff’s abortive, unsettling visit to the wolfen’s lair in the church, rapid, close-to-the-ground, color-shifted subjective shots indicate that the superwolves are stalking the detectives, who now know too much. (Wadleigh resorts to a couple of disappointing rote jump scares, superfluous given the brooding atmosphere of menace that is building.)

As it unfolds, Wolfen elaborates a cold, bleak vision of the modern world with the sardonic and impassive Wilson personifying the prevailing cynicism. As he fixes Neff a drink, she asks: “You got any ice?” “Only in my heart,” comes the reply. Later, asked whether he’s ever killed anyone, he says “Why don’t you ask how many?” The devaluation of human life is established from the get-go. At the Battery Park crime scene, Whittington, after showing Wilson that van der Veer’s wife’s head has been almost completely severed, continues, in a foreshadowing of the film’s climax, “During the French Revolution when they chopped the heads off, they quickly picked ’em up out of the basket and looked ’em in the face… Every fifth head or so was alive, wide awake, eyes blinking, mouth trying to say something. The brain can live without oxygen for more than a minute… How’d you like to see your own body and know you’re dead?” But it’s the film’s morgue sequence that serves as a summation of Wolfen’s dark philosophical outlook on how far humanity has fallen, with the staff cracking wise about the corpses, Wilson’s indifference at the sight of autopsies in process, and the indelible image of the fingernails of a female cadaver’s hand scraping across the metal surface of a gurney as it’s hauled away.

After a stakeout of the church equipped with nightscope-mounted rifles and a parabolic sound capturing dish goes south, Wilson finally returns to Holt for answers. “For 20 thousand years, ten times your fucking Christian era, the skins and the wolves, the great hunting nations, lived together, nature in balance,” recounts Holt. “Then the slaughter came. The smartest ones, they went underground, into the new wilderness, your cities, into the great slum areas, the graveyard of your fucking species.” The kinship between the last vestiges of the Native American nations and the wolfen is underlined in an earlier draft of Wadleigh and David Eyre’s screenplay, which begins with a five-page prologue set in 1660 featuring Dutch settlers ambushing both a nocturnal Native American hunting party and three wolves stalking a deer. (Incidentally, “wolfen” is the Dutch plural for wolf).

In the end Wolfen is a film about territory: America as a land stolen from its natives by colonists who all but annihilated an entire species and whose ancestors now lay waste to the entire world in the name of capital. (When informed that van der Veer “has got interests on every continent—fronting a government overthrow, putting a mine in some holy ground, moving a town,” Wilson observes with typical sourness, “A real friend of the Third World.”) The ruination of the inner cities and the depredation of their inhabitants are but one byproduct of the rapaciousness of today’s robber barons; the soullessness and alienation of humanity is another. (That said, Wilson appears to be a practicing Catholic.) The wolfen’s killing of van der Veer is an act of self-preservation, to protect their hunting grounds from…gentrification. In a resounding indictment of modern mankind, we’re told that their usual prey are “Your garbage… the sick, the abandoned, those who will not be missed.” This harks back to a brief sequence in which a doomed junkie stumbles his way into the church ruins in search of narcotic-induced oblivion, his hallucinating, drug-addled POV in stark contrast to the wolfen’s intensified apprehension of the world.

The production of Wolfen didn’t end well. The film’s $11.3 million budget ballooned to $17.3 million (the ruined church set a record for the largest set constructed fora New York-shot film). Wadleigh presented Orion’s executives with an incomplete four-and-a-half-cut in November 1980. Under serious interest-payment pressure, he was fired by the executives who had left United Artists just in time to dodge the financial armageddon of Heaven’s Gate. Producer and Wolfen second unit director Rupert Hitzig, who originally optioned Streiber’s novel before Wadleigh was hired, stepped in to handle reshoots, pickup shots, and the task of cutting the film down with the uncredited help of editor Richard Chew. Orion then brought in director John D. Hancock, who apparently reshot some of the Wall Street wolf scenes and did some further recutting and remixing, and years later expressed contempt for the whole enterprise. Hancock also replaced Craig Safan’s avant-garde aleatoric music with Horner’s haunting and—it has to be said—extremely effective Charles-Ives-meets-Aaron Copland score (which James Cameron shamelessly induced him to reprise for Aliens).

Wadleigh challenged Orion over his creative rights as a director, having been denied the opportunity to preview his cut of Wolfen before a paying audience. In a landmark Directors Guild of America arbitration, it was established that contracts between directors and movie producers henceforth would stipulate a director’s right to have his cut of a movie “previewed before a public audience or screened before a private audience of no fewer than 100 persons of sufficient diversity to obtain an adequate audience reaction.” Wadleigh was awarded $20,000 on technical grounds—and has never worked on a movie again. Ironically, more or less all of his vision comes through in the final version.