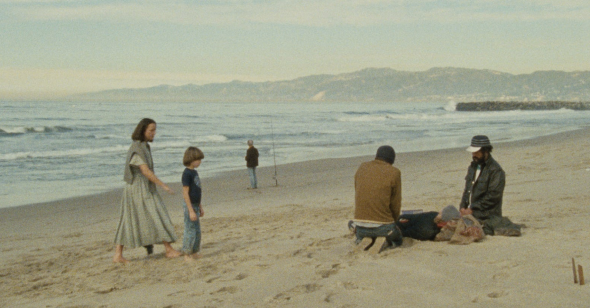 Agnès Varda’s Mur murs, a panoramic 1981 documentary about the murals of Los Angeles, opens with a child leaning against a painted wall as if posing for a portrait and closes with a cataclysmic image of a freeway overpass violently severed from the land; Documenteur, its fictional companion, opens with a woman’s back to the camera, as she gazes up at the same mural (which evokes the precarity of the earthquake-prone city along with the liberation and isolation of its residents), while a child reaches into a parked car and pulls out a ball, tossing it to the woman, who returns it in play. Varda’s following film inverts the front-facing presentation of Mur murs; instead, we find a woman turning away. In Documenteur, Emilie (played by Sabine Mamou, the editor of Mur murs), a French woman estranged from her American partner Tom and semi-stranded in Los Angeles with their son, Martin, appears in the same landscape as Mur murs, but as an outsider to the exuberant expressiveness of the murals. She encounters them, but briefly, and returns to her child.

Documenteur’s official subtitle is An Emotion Picture, but there’s a second subtitle in its opening credits sequence, on the slide that lists the director’s name: “DOCUMENTEUR,” it reads, and then under it, “dodo cucu maman vas-tu-te-taire.” There’s no translation from the French on this subtitle, although if we listen closely, we do hear it later when the voiceover narration tells us these are Martin’s little magic words: “dodo” for “sleep” (translated as “beddy-bye”); “cucu,” which is either a version of “coucou,” for “hi there,” or “cucu,” for “little butt” (cul) (translated in the subtitles, I think misleadingly, as “cutie-pie”); “maman” is “mama” or “mom”; and “vas-tu-te-taire” is something like, “will you shut up!” (translated as “hush-now-will-you”). This is kids’ talk, sweet and aggressive by turns, and it gives the already punning title of the film (“documenteur recalls “documenter,” of course, but docu-menteur literally translates as “docu-liar”) a third resonance. The interaction between mother and son, with its affection, annoyance, boredom, conflict, and pleasure––the “love, impatience, mystery, daybreak, irritation, fly, tenderness, beach” that Martin’s name means to her––is the center of Documenteur, in which Varda’s own child, Mathieu Demy, plays Emilie’s son.

Varda, who made both films living, like Emilie, in Los Angeles with her son while separated from her husband, sketches her narrative in that opening: Emilie’s interior––her wonder, alienation, and confusion captured throughout in the staccato poetry of the voiceover, spoken by Delphine Seyrig––is underscored by the hum of parental responsibility, like the mother-filmmaker’s title by “maman, vas tu te taire!” She has to feed Martin, make sure he gets to school, do the laundry, find somewhere for them to live, furnish the apartment with castoffs she carefully cleans––as well as show him sympathy, discipline his outbursts, share his games and laughter. These daily labors, exhausting and intrusive as they can be, keep her tethered to a world she might otherwise, in her grief, slip away from, like the drifters or glass-eyed workers Varda captures on the piers, on the beach, at a cheap café, and in the bright, shabby streets.

The narrator of Mur murs tells us that in Los Angeles she only saw walls; the narrator of Documenteur sees only faces, which “seem more real than what’s conveyed by words.” The faces we see are mostly men’s faces, anonymous, blank or bored, creased and closed off, until we land on Emilie’s: “this woman, with her sullen face and her lost expression, is most likely me, and she’s real, but I don’t recognize myself in her.” The murals impelled self-recognition; the faces, only misrecognition, as if the power of the image to make sense of incoherence has somehow been lost. Emilie’s sadness has broken things into single words: “peur, peine, panique [fear, hurt, panic]” and especially “douleur [emotional pain].” Only her son remains incandescent, full of meaning.

In Mur murs, people come together; in Documenteur, they break apart. You could call it a “1970s-hangover” movie: the triumphant colors of Mur murs have washed out—even the beach looks bleached, and the celebratory, rebellious atmosphere has turned to quiet defeat. Emilie spends her days typing for a French filmmaker whose face we never see, in front of a window with a view of the beach: “I like the view in front of me,” she says, “it’s like being nowhere.” She thinks about her departed lover, his body, their sex, and it’s hard not to ask, with Martin, why his dad never comes to see him, why Emilie has to do it all alone. One scene cuts between Emilie on the phone, trying to find an apartment, and a couple fighting, the man shoving the woman out of an apartment she cries out belongs to her: a bitter little portrait of casual gender violence.

But Varda’s representation of single motherhood is not one-sided; think of Pomme in One Sings, the Other Doesn’t (1977), a film about reproductive rights that answers the question of whether a woman can self-determine and be a mother with an emphatic yes––as long as you get rid of fathers. In that film, a counterimage of the single mother glimmers into view, a single mother who is liberated and loose, who fills her own needs with buoyant practicality: men for sex, children for love and home, art for herself. Emilie is not Pomme––for Emilie, “being separated from a man means being in exile from all men”––and the context of Varda’s life experience in the interim between the two films (her separation from her husband, but also the professional disappointment of a planned film in Los Angeles, for which she returned to the city in 1979 with Mathieu, falling apart) might account for some of the difference in the women’s outlooks. But we see glimpses of Pomme’s looseness in the American waitress Emilie befriends, also a single mother (who, like Pomme, lives with one child while her former partner lives with the other), and the ease with which Emilie lets her son roam unsupervised around their housing complex made me long for the days when, to quote a recent article by Ginia Bellafante, “the various responsibilities of child-rearing were shared with television, the frozen-food aisle, Jane Jacobs’s ‘eyes on the street,’ and the random neighbor in 3F.” Bellafante dates the stark turn from that world to the one of today (with the expectation that mothers are “always to be ‘on,’ engaged in relationships [with their children]…at once kinesthetic, tirelessly management oriented, and unrelenting in their emotional solicitations”) to the early 1980s, which would locate Documenteur at the end of something––the possibility, maybe, that women could actually be free.

Watching Varda’s film, I thought of Yūko Tsushima’s novel Woman Running in the Mountains from one year earlier (1980), which follows Takiko, a self-possessed if adrift young woman in working-class Tokyo, who gets pregnant after a one-night stand and decides to keep the baby. Without money, forced to continue living with her parents, she insists on making a life for herself and her son, returning to an interior image that captures her longing for a kind of maternal freedom: “Takiko closed her eyes and pictured herself holding a baby lightly to her breast and running at top speed.” Emilie may be past that particular fantasy of ecstatic co-extensiveness; a scene in which she lounges nude in her absent employer’s bed, in sensual self-gratification, examining her face’s distortion in a mirror, intercut with shots of Martin returning home and searching in vain for his mother, dramatizes the conflict, at once practical and existential, between subjective absorption and caretaking. But nothing bad happens to Martin while he’s on his own, and though he reproaches her, she fires back without guilt. “I don’t want you to leave me,” he breaks out. “I’ll never leave you, Martin,” Emilie smiles. The film ends with the two of them at a street fair, where Emilie looks forlorn, until she embraces her son, laughing, and lifting him into the air.