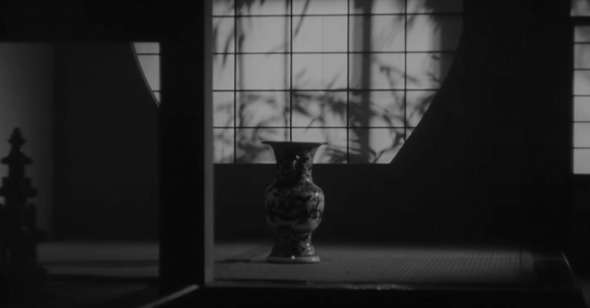 There’s a scene early in Yasujirō Ozu’s Late Spring (1949) in which Somiya, a professor and father, sits at home with his friend, Mr. Onodera. Somiya’s daughter, Noriko, serves them warm sake. Onodera, or uncle, as he’s lovingly addressed by Noriko, is disoriented.

“Is the ocean near here?” Onodera asks Somiya, mistaking the direction.

“Is the shrine over this way?” he asks soon after. “Which way is Tokyo?”

In the context of Somiya and Noriko’s home, Onodera is all but lost. This is the world of our protagonists, a father and daughter who have built, within these walls, a loving and symbiotic relationship. Noriko fixes her father’s collars, cooks his meals, keeps his life in order. Her father offers her stability and a sense of purpose. In this ordinary scene, we gain an understanding of how this home, this series of interconnected rooms and objects, makes sense to Somiya and Noriko, if no one else. Whenever Ozu cuts to the ocean, to the shrine, or to a baseball game, we too become disoriented. Settled into this perspective, even a Coca-Cola sign on the beach, a reminder of a world outside Ozu’s frame, feels out of place.

It’s not long before Noriko is pushed into a marriage she doesn’t want, leaving her father behind. Somiya’s sister insists on the marriage, making all the necessary arrangements. Somiya, understanding that marriage could open up a future for his daughter, dupes her into thinking he’ll remarry too, and that he won’t be left alone. He and Noriko take one last trip to Kyoto together; just like that, we’re swept from the comfort of their home and their things. The two share a room at an inn and, before retiring for the night, Noriko recounts the day to her father, admitting that she regrets calling Onodera’s remarriage “impure” earlier. She’s smiling; even in this dark room, with no one else around, she grins almost dutifully. Soon, though, she’ll express her resentment toward her father for also choosing to remarry, and her smile will fade. Somiya, just in time, has either fallen asleep or pretended to. Noriko stares off in silence and we cut to a vase perched on a tatami mat, a picture of stillness against shadows of bamboo shoots outside the window. The shot lingers for a few seconds before cutting back to a stoic Noriko—and back to the vase again, this time for even longer. We can hear her father’s light snoring.

The vase is not in her eyeline, nor does it move the story forward in any meaningful way. Which begs the question of why Ozu inserted it at all. Noriko and her father are often alone together, but never in a space this vulnerable, never in such a fraught moment, on the cusp of irreversible change. Noriko will be married and Somiya will grow older by himself. If anything, placing this vase where he does reveals Ozu’s reverence for objects and their ability to say more than a character could with words.

The director is well known for these “pillow shots,” which briefly suspend the narrative flow of a story. Such shots are often of benign objects or landscapes—a mirror, a clothesline, a mountain—but they destabilize the viewer enough to allow one to dig into feelings that might not be articulated by the characters. In replacing words with these images, the film isn’t making a point so much as evoking one. Here, Noriko is acknowledging her change of heart about Onodera, her emotions toward her father, and, ultimately, her fate. Stasis, represented through this motionless object, allows us to make sense of the contradictions and the inevitability of change in this family. Where Noriko’s world is increasingly riddled with cracks, the vase is sturdy and whole; where her future is in a motion she cannot control, the vase is comfortably still.

The next time we see Noriko and Somiya, they’re packing up their bags, placing their objects intentionally, reverently, in suitcases. With each item put away, their time together comes closer to an end. They pause for their most earnest conversation yet. Noriko, in a moment of honesty, says she wants things to stay as they are. Somiya, in true fatherly form, expresses that she has her whole life ahead of her and that he’s only getting older. All the while, the vase can be seen in the same frame as Somiya and Noriko, on the far left behind Noriko’s back. It’s present as father and daughter pour out their inner thoughts, almost as if the vessel will be enough to contain the spill. Ozu manages to bring back this symbolic object without making it the center of attention. He’s primed the viewer, this time, to notice.

Soon after, as Noriko prepares for her wedding—a scene that Ozu pairs with somber music—Somiya reiterates the point he made in Kyoto. “Be happy,” he says. He repeats it for good measure. With tears in her eyes, Noriko looks anything but. At its core, Late Spring expresses the sorrow of letting go—but also the hope that comes with it. Noriko’s cup will overflow with happiness in her new life; meanwhile, Somiya’s cup will sit emptier than it was before. If their happiness was shared before this family rupture, now each is responsible for his or her own. A vase is essentially an empty object waiting to be filled. That it can embody this transition, this delicate act of filling up for oneself versus filling up for another, is quintessential Ozu. Not a shot is careless or out of place in his entire body of work, which makes the lingering memory of the vase—that shot that comes out of nowhere—so resonant.

As Somiya and Noriko head off to their respective futures, we’re left in their house, with a mirror, a chair, an assortment of objects that have become all too familiar. There’s nothing more for the characters to say. We won’t follow Noriko into her newlywed life or Somiya into his days as a professor living alone, but, as, the vase evokes, we assume there will be sadness and happiness, emptiness and fulfillment, in equal measure. Late Spring deals with feelings that are often unspoken or impossible to articulate. In Ozu’s masterful hands, objects fill the silences.