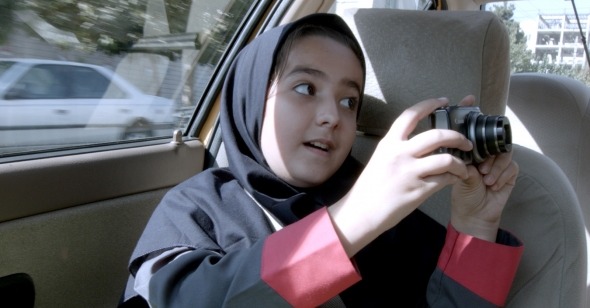 From There to Here
Naomi Keenan O’Shea on Taxi

On an October evening in Dublin five years ago—presumably cold and wet and wind-whipped—I went to see Jafar Panahi’s Taxi at the Irish Film Institute. Several years prior, in my first year studying film at university, I was introduced to Iranian cinema through Kiarostami’s Taste of Cherry and Ten. I remember feeling overwhelmed watching these films, moved in a way I couldn’t articulate, unequipped with the language, or understanding, or perhaps maturity, to unpack their meanings and the feelings they incited in me. I came to Panahi’s films with an anticipation of experiencing this uncertainty once more. I was looking to be moved again in this intractable way that film theory and academia couldn’t navigate or explain for me.

I experienced a circuitous route through Panahi’s canon, beginning with his most recent post-ban film at the time when I attended a screening of Closed Curtain at the IFI. This was the second film he made under his censorship ban, which prohibited him from filmmaking and confined him to house arrest while awaiting trial by the Iranian government. Taxi would mark his third film made under these extreme censorship restrictions, charting a trajectory of increasing openness from his first post-ban film, This Is Not a Film, which was made entirely within the confines of his family home in Tehran. I struggled to apply the film theory I was learning in university to his films, which seemed to slip away from me at the same time that they held me fixed. His post-ban films are an emotive jumble of filmic gestures, odes, and laments both to existing films and to films that may never be made, puncturing the boundary between fiction and reality. They play with filmic form and storytelling in ways that both enthrall and confound me, challenging my academic education but also confronting me in far more personal ways.

I grew up in Dublin during a time when the role of the Catholic Church in Irish society was at last being openly and fervently challenged. Dissenting voices that once occupied a space on the margins began to enter the public sphere as scandals broke of child sexual abuse within the Church, of the trauma endured in industrial schools, and of the systemic abuse of women in Magdalene Laundries, in mother and baby homes where unmarried and pregnant people were confined, and across all facets of public institutions and private spaces. As I grew up, these realities became speakable in new ways, though their existence had always been known. Around the time I began watching Panahi’s films and studying his post-ban work for my final year thesis, these issues were front and center in my world as the campaign for abortion rights was being fought and resistance to religious control over public life was finding ground in Ireland. I remember standing on freezing winter streets in the inner city with my family amongst crowds gathered in memory of Savita Halappanavar, an Indian woman living in Ireland who died at an Irish hospital when she was refused a termination while miscarrying because, as a midwife told her, “Ireland is a Catholic country.” Those dark and bitter winter evenings brought me into a space no longer marked by silence, a place where certain truths were beginning to be collectively registered as people moved outdoors, out of their private houses filled with condensed secrets, and into the public visibility of the city’s streets.

This was a period in which silenced histories, bodies, and personal stories became publicly legible for the first time, despite the consequences of criminalization that such legibility still carried. People came forward to tell stories to friends and family and then publicly in the streets and to the media of their experience traveling abroad to obtain abortions, of the lies they endured in state schools about their own bodies and sexuality, of the misinformation or outright silence they received from medical professionals, and of the unknown family members that surfaced throughout their lives that represented the generations of coerced and unspoken adoptions. This period became a reckoning with the power of silence to keep realities at bay, to deny existences both symbolically and literally, to hold people in isolation and alienation so as they could not trace their shared condition, or recognize that one existed. It was a moment in which people began to tell stories of their lived realities and identities that no longer aligned with state-sanctioned misrepresentations of their lives.

While I experienced this visceral unfolding across the political landscape of Ireland in the coming years—abortion was at last legalized in Ireland on May 25th, 2018, by popular vote—I was in the midst of my delving into Panahi’s post-ban films, exploring how the particular censorship conditions under which the director lives give shape to his storytelling as a distinct mode of resistance. When I think back on the context in which I came to his cinema, it is difficult not to find a seemingly far-flung connection between my fascination—my fixation—with Panahi’s post-ban work and the particular time and place from which I engaged with it.

Watching Taxi, I found myself oddly calmed by the film’s unexpected humor following the melancholy and frustration that marks Closed Curtain and This Is Not a Film. With Taxi, comedy serves as a method to negotiate pain and trauma in order to locate resting places for the unspeakable. With Panahi himself as the film’s eponymous driver, the director journeys through the streets of Tehran with a covert camera fixed to his dashboard. Various characters enter and exit the taxi, wryly calling attention to the film’s fictional boundaries and the broader political contexts that envelop them: the illicit DVD smuggler Omid offers knowing smiles as he recognizes Panahi is staging certain scenes; Panahi’s young niece Hana precociously outlines the terms of distributable filmmaking in Iran; the human rights lawyer Nasrin Sotoudeh appears spontaneously on the roadside to offer a brief yet piercing soliloquy on the valuable role of cinemagoers, which ends with a parting remark to Panahi to cut her speech from the film lest he further aggravate the authorities. Watching Taxi, I could at last feel the power of this boundary blurring, its story-making and world-making capacity, and where I felt unsettled in my inability to initially grasp the potency of Panahi’s work, I was beginning to understand it through Taxi’s exploration of the gap between what is knowable and what is representable—and the power of speaking to that space. This in-between materializes across Taxi’s roving spatialities, which produced another paradoxically calming effect on me as the film journeyed outside the enclosed private houses of This Is Not a Film and Closed Curtain and into the Tehran streets, carrying both the promise and threat of entering public space.

I likely will never fully comprehend the gravity of these performances, their speech and material presence on-screen, but also the reality represented in these characters’ extratextual lives. But my distance also offers up a strange feeling of solace through shared humanity. There is a sense of both proximity and insurmountable separation in witnessing the fleeting conversations and relationships that evolve in the film’s short runtime. Its characters’ lives seem palpably close at times, almost knowable in their generosity of spirit and the complexity of their encounters and negotiations in shared space. Though they occupy a world whose nuanced cadences will always evade me, in their refusal to remain unseen, to leave stories untold, and in finding collective ways to articulate resistance, Taxi’s characters resonated uncannily with my own vastly different space. This is not to draw facile connections between the political contexts of contemporary Iran and Ireland, nor to simplify the complexities of their respective religious milieus, but to attempt to locate the power of storytelling and human connection under conditions of silencing and denial. And to ask why such distant and ultimately unknowable representations of this power circle back to demand reflection upon my own world.

Perhaps I would not have been drawn to Panahi’s work at all had I not watched his post-ban films at that particular point in my life. On first watching Taxi in the IFI, I was unaware of the institution’s own historical relationship to censorship. Originally established in the mid-1940s as the National Film Institute, the cinema operated under the patronage of Archbishop John Charles McQuaid, serving as the moral guardian and educator of the Irish public. The institute took responsibility for distributing films to schools, universities, and associations throughout Ireland in line with the teachings of the Church, binding the cinema to the country’s systemic indoctrination. I remember a lecturer telling us that so many cuts were made to Cat on a Hot Tin Roof by the Irish censorship board that the film no longer made sense by the time it screened in Ireland. Representations of sex, divorce, birth control, violence, and negative depictions of Christianity were censored across all films screened in the country. I think about Hana reciting to Panahi the terms guiding the production of distributable films in Iran—no sordid realism, no contact between men and women, respect for the veil, no violence. This makes me think about the myriad ways places produce their modes of sense-making and how these practices shape people’s understanding of themselves, their desires, their bodies, and their relationships to others both near and far. Under the state-sanctioned fragmentation of realities, of knowledge and memory and expression, alternative and insurgent forms of sense-making are shaped, and I found Panahi’s films addressed this for me in ways I needed, from my own very distant city and home that was experiencing an immense cultural and political reckoning.

I watch Panahi’s films because I am moved by how he shapes stories within and against the boundaries of his filmmaking ban. I am moved by how his characters lean into the small spaces of his contained world to unsettle it in gestures that feel both resilient and transformative. This particular attachment comes from both an academic and a personal enchantment and the long process of accepting the gaps in my understanding to be critical and formative to my experiences. Witnessing others tell stories of themselves, of their worlds and desires and fears, in order to represent themselves and persist against their own effacement holds something necessary up to the world in which I was raised. It teaches me the paradoxical myopia of seeing oppression and resistance as existing in an elsewhere, in perceiving such tensions as an otherworldly and distant spectacle without exploring how they also and always nestle closer to home.