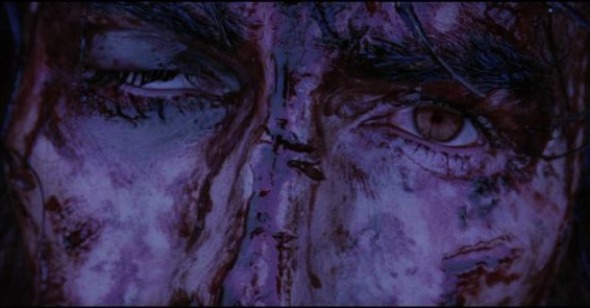 Consider the Source
Michael Koresky on The Passion of the Christ

I opened my wallet for Jesus. And then, after paying the ten dollars and twenty-five cents, sitting through the ear-splitting, retina-scalding Regal Cinemas’ 2wenty (“Remember to arrive at the theater early!”), ads for Eclipse breath-freshener and Coca-Cola, bulbous oversized M&M men and a TNT “We Know Drama” sensory overload, I was ready to be saved. Lifted out of my seat, perhaps, and brought back down into my chair just in time for the beginning of lent.

Alas, in the end, The Passion of the Christ was a movie. A mere movie. Mel Gibson’s brilliantly cynical marketing strategy, buoyed by the ADL’s advance work, lured even us non-believers (sinners) into the theater; certainly we didn’t expect to emerge as right-wing Christian fundamentalist converts, but we had every right to think we would be witnessing an honest representation of human and artistic faith, a spiritual roadmap to the psyche of a filmmaker and actor who felt driven, even instructed by God, as he has claimed, to create a cinematic likeness of the divine. It’s not essential that a moviegoer agrees with the political or religious implications of the images emblazoned on the screen, but that the images translate as a response from the filmmaker’s soul, that we believe we are witnessing the gospels as Mel himself sees them. The sheer divine force offered by Pasolini, Scorsese, by Bresson and Burnett and Spielberg, by Alexanders Payne and Sokurov, manifest in images that relinquish themselves to whatever artistic means necessary, not in shameless grandiosity that wishes to pummel the viewer into submission, into terrified acceptance. Gibson may find disingenuous the earthy benevolence of Pasolini’s Christ and the psychological torment of Scorsese’s, the lyrical allegory of Bresson’s Balthazar and Spielberg’s E.T., the spiritual personification of Payne’s Warren Schmidt or Sokurov’s cancer-ravaged saint-mother; he wants a more direct address, to make you feel every thrust of the rusty nail as it’s hammered into Jesus’s palms, to clutch your own shoulders as Jesus’s arm is ripped out of its socket, to cover your eyes in gratitude when the crucified thief’s eye is plucked out by a vengeful crow, to reverently ooh, aah, and shriek when Jesus is scourged, his back torn and ripped open into a hundred fleshy strips. Apparently to Gibson, there is no metaphor in religion; faith manifests itself as a spiritual dead-end, a believe-it-or-be-damned expression of finality. Of course Gibson, progeny of his fundamentalist missionary father’s terrifyingly stubborn outmoded beliefs, ended up a Hollywood actor—that particular “dream factory” churns out endless expressions of American complacency every year, cheerless damning spectacles of moral righteousness and unambigious carnal pleasures. Of course Mel Gibson, though a self-avowed man of endless spiritual vitality, can only depict the divine through the employment of hundreds of buckets of stage-blood. With its ludicrous, Hollywood-fortified conviction (not the same thing as faith, incidentally), Passion may be the world’s first completely banal Jesus Christ film. And though it’s remarkably, hopelessly literal, it was certainly waiting to happen. It had to happen.

If 2000’s Gladiator ushered in the new Bush regime, then perhaps Gibson’s blockbuster is the new 21st-century’s first true coercively conservative “classic.” Rarely has a film with a fundamentalist core been so blatantly conceived, so forthright in its admissions. Every decade of American film, though never preoccupied with anything grander than itself, nonetheless ends up a product of its own political backdrop. First Blood and its subsequent sequels became emblematic of the Reagan era, literally winning Vietnam back from the liberals, reasserting the swaggering machismo of the American hero that Seventies Hollywood attempted to all but decimate. And just as Stallone enacted Reagan’s cloudy-headed right-wing version of recent history, Gibson’s Christ—“compassionate” Conservative, deliverer of that old-tyme religion—emerges from the tomb at just the moment of the Bush administration’s attack on civil liberties, and the attack on the Civil Rights of American gays launched by Dubya himself with full-on, unabashed old-testament condemnation. Those who speak out against Gibson’s film are automatically stigmatized as leftist rabble-rousers and hapless atheists; to deny its physical impact or so-called technical grandeur is to supposedly denounce Gibson’s personal belief system. What’s more essential is to realize that when Gibson’s savvy propaganda piece, meant to inflict a tough-love Jesus on the nation’s wayward souls, floods into 4,000 screens, another dam between Church and State begins to crumble. The youngsters of the Clintonian nineties, finding solace in the emergence of a truly multicultural pop mainstream, need to be reclaimed by the right, shorn of their piercings and tattoos, and brought back to Sunday school; who better to do that than Jesus himself, this time, like Rambo, stripped to the waist, chained and whipped, flesh torn and limbs broken, but never down for the count?

Gibson’s investment in the physical punishment of Jesus, the evocation of a hell-on-earth, as opposed to the love and beauty of his teachings, makes his film the almighty visual equivalent of straight-from-the-pulpit fire-and-brimstone. Yet ultimately, The Passion of the Christ makes a spectacle out of nothing more than its own mundaneness—its reliance on old-fashioned, yet recently revived filmic tricks and tropes, recalls a century’s worth of epic filmmaking. After all, what is grandiose Hollywood style if not a mere byproduct of Biblical pomposity? It’s a mode that flows through Gibson’s veins, it’s in his target audience’s blood, both the Hollywood drones and the evangelical sheep, both torn down and rebuilt from years of hellish sour-Sunday sermons and preview test screenings. They’ll only get it if it’s screamed into their ears: “Jesus died for your sins!” emanates from the Bible Belt as a blood-curdling shriek, loud enough or they won’t get it; “Make sure it’s in slow-motion, real slow, yeah, like that,” whispers the studio bean-counter “and get the guy that composed the music for Armageddon. We must have percussion. More percussion! Loud enough or they won’t get it.”

The obvious sadomasochistic urge in Gibson’s career reaches its natural apotheosis in The Passion of the Christ, and only proves that his previous action-film forays into the crucifixion and crushing of the human body are even more hilarious than we had originally perceived. Could Mel possibly think that the torture scenes in Lethal Weapon (trussed up and electrocuted), Payback (crushing hammer blows to extremities), and, of course, Braveheart (crucified and vivisected martyrdom) bring enlightenment? The paradoxes and hypocrisies are too multitudinous to imagine: the fetishization of violence on display in The Passion is ultimately too extreme and extended to dismiss as over-stylization. When working through his own religious issues of the pain (and pleasures) of the flesh, Gibson loses sight of his lord’s benevolence and guiding spirit, and the creepy psychosexual imagery (a young, virile, white male body, chained up and flogged for an eternity) is validated for his audience as religious fervor.

It’s amusing to imagine The Passion of the Christ as Gibson’s version of Dreyer’s The Passion of Joan of Arc. It’s not just the titles that draw similarities—structurally, they focus only on their martyr’s final hours, rather than narrating the spiritual, political, and social factors that drew them to their inevitable, terrible ends, abstracting back-story so that all that matters is the physical pain of the here-and-now. Gibson’s film begins directly after The Last Supper, in the garden of Gethsemane (only a few moments before Judas returns with the Roman guards to take Jesus away), and with the exception of a few brief flashbacks, Christ is never given a chance to speak, instead he is dragged around in restraints, from Pilate to Herod and back again, and finally to Golgotha. Dreyer’s unending extreme close-ups focused on Joan’s final, painful moments on earth to express a wondrous metaphysical presence, in Maria Falconetti’s eyes you could see a compassion that defied mere religion; when Gibson fills the frame with Jesus’s swollen eyes and cracked, blistering nose, it reveals nothing more than plasticine wound effects.

The sheer unambiguous condescension of the Michael Bay-school-of-moviemaking approach, its visceral inanity, is what ultimately is the film’s undoing. In retrospect, this seems an even greater problem than the pomposity of the Aramaic and Latin subtitling (that purports a finite verisimilitude, even though the same striving for historical accuracy wasn’t put into the casting, as Jesus is portrayed by The Thin Red Line and Frequency’s very white Jim Caviezel, albeit with a vaguely sephardic nose prosthetic), the overwhelmingly sympathetic portrayal of Pontius Pilate in the face of a rabble of blood-thirsty Jews, and even the mincing, Roger Debris-ish evocation of King Herod, bewigged, made up like Divine, flanked by half-clad male slaves, and just itching to be tossed out a window, as in Braveheart’s gay-baiting, crowd-pleasing low point. Gibson’s religious conviction is barely in question, and as a trumpeted, self-promoting extreme-fundamentalist movie, The Passion cannot be faulted. His much-discussed, pre-Vatican II reform, traditionalist Catholic beliefs are reflected, writ large on the screen, to be sure, and his film may be our supreme example of the inextricability of commercialized religion and self-important showmanship. Jesus sacrificed, but he’s going to come back à la Die Hard 3: in other words, with a vengeance. And on the way out of the theater, I witnessed one of my fellow moviegoers gazing up at a poster for an upcoming release that would surely be the next site of holy deliverance: the remake of Walking Tall, starring The Rock.