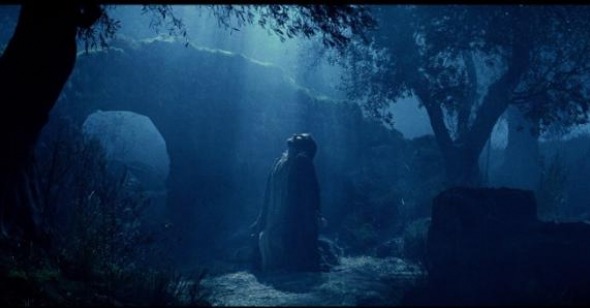 Jesus Christ Superman
Jeff Reichert on The Passion of the Christ

Forgive me Mel, but The Passion of the Christ just plain stinks. To be expected, I suppose—did anyone really believe that Mad Max was capable of a cinema that operated beyond the kind of plodding, dunderheaded ridiculousness that makes The Passion little more than a prequel to Braveheart? To read pro-Passion website www.seethepassion.com, you’d think we were in the midst of the Second Coming, complete with a shadowy media-Semitic conspiracy to keep word of the event away from true believers. Featuring daily updates and petitions allowing the God-fearing a chance to electronically enlist in the “Culture War which will determine the future of our country and the world” (a direct quote—I’m not kidding), seethepassion.com turns what is essentially a poorly-made piece of Christian pornography into a rallying point for the kind of mindless, sadistic crusader impulses the rest of the world automatically assumes of Americans. The reasonable among us knew it was coming, and that subtitled or no, it’d hit us on thousands of screens (courtesy of the Newmarket architect behind My Big Fat Greek Wedding’s season of saturation, no less), it was going to be pretty embarrassing, and that relative questions of quality would have no impact on box office. There’s not really much in The Passion that surprises at all, except perhaps the realization that it’s worse (culturally and aesthetically) than anyone could have anticipated. Can’t he just go back to Australia?

For all Mel’s talk show prattle about his beliefs, convictions, and how making this film saved his life, Passion feels the work of an artist so weak in his own faith that he needed to enter into a self-financed $30 million pissing contest with the entire planet. Is there any other way to explain the insane fascination with its latex violence, without calling the director’s own proclivities into question? Mel’s not trying to enlighten us spiritually; he’s trying to pummel ticket buyers into believing he’s the best Christian since JC. If Gibson was 20 years younger, I’m sure we’d have been treated to the spectacle of thousands of William Wallaces, capped with thorny crowns on billboards and theater lobbies. (Instead, he just spots the nail for Jim Caviezel.) The circumstances around its existence shape up like a Mel-starred Diary of a Country Priest crossed with Rambo—instead of turning his spiritual crisis into self-privation, he’s unleashed the beast on us all. Released in Aramaic and Latin and drenched in blood because those involved wanted to “show how it really happened,” The Passion’s creators miss the core of great religious (or spiritual) art by a wide mark. Anyone can appreciate the Sistine Chapel or J.S. Bach, but it takes a true believer to appreciate—or tolerate, rather—Mel’s third film. I’d like to sit those who extol “the greatest film about Christ’s life ever made” (a quote from a Reverend, mostly interesting in that it implies that Christ’s life consisted of twelve hours of beatings and assorted flashbacks) down for a screening of Pasolini’s The Gospel According to Matthew which captures without violence, and with an abundance of humanity and artistry, everything The Passion elides.

In a world where all signs point to a global rise in hatred towards Jews, making a film with such ingrained anti-Semitism is beyond irresponsible. (Of course Mel denies, but who were “they…those people” who he accused of trying to drive a wedge between himself and his obviously insane father on Diane Sawyer?) I’d feel safer taking a group of schoolchildren to Veit Harlan’s Nazi film Jud Süss—at least they wouldn’t have to suffer through the interminable flaying of Caviezel’s plasticine bodysuit. As an added bonus they’d be easily able to pick the caricatured representation of Judaism to pieces, and locate it as the product of a very specific cultural moment. I hope that the early 21st Century won’t be judged some day by our fascination with the cinematic ravings of a madman. New York Press Critic Armond White, in response to honest critical outrage at the violence and lack of substance presented here as “serious” filmmaking, notes that this kind of commentary, “would never be applied to, say, Schindler’s List, out of simple cultural respect.” He’s right, but it’s not due to the frightening whiff of anti-Semitism behind the remark. Schindler’s List was an honest, if flawed, attempt to grapple with a shared cultural legacy in a serious, personal fashion. It too focuses on providing a verisimilitudinous view of an central event of shocking violence, and if Spielberg loses the enormity of the Holocaust in his attempts at realism, at least there are moments of grace for his audiences to breathe through. Calling The Passion a “snuff film,” as David Denby did, is entirely appropriate—all 126 minutes of the film are ample proof that Gibson doesn’t know how to offer us anything but. I find it hard to agree with Armond’s charge critics “only get upset when violence is made to matter, when it’s presented artistically” as Gibson’s aesthetics are borrowed straight from the “tide of sarcastic, nihilistic, anti-human movies “ he rails against every week.

Arguably the only surprise that The Passion affords will most likely go unnoticed outside the realm of the cinephile. When was the last time Armond White and Roger Ebert agreed? Ebert’s ridiculous four-star review completes the flanking maneuver he’s been trying to run past Roeper for months, managing in 1000 words to offer up only “it’s the most violent film I’ve ever seen” and “take it or leave it” as editorial justification. As of the time of this writing, The Passion is the only current film to receive his highest rating listed on the Chicago Sun-Times site. All the rest get three stars. Ebert’s is the kind of reviewing that Armond climbs up onto his own personal cross each week to rail against, though with increasingly diminished returns, especially over the course of the past year. To be sure, reverse shot has taken its share of swipes at the establishment, but in a climate where most critics will roll out the accolades at the mere sight of dust covered sandals, the probing, rather thoughtful approach to The Passion found in most instances was a point of hope. It wasn’t so much that critics were upset at violence presented seriously, most managed to separate boorish fanaticism from skill indicating that it wasn’t employed seriously enough. I’m sure Gibson’s dogged insistence on striking down his own path touched a chord with the equally stubborn contrarian that is Armond. In a way, Mel and Armond strangely manage to intersect, being as they are smoldering inversions of Flannery O’Conner’s Hazel Motes—they continue on their doggedly ideological paths not because they believe too much, but because they don’t believe at all.