Best of the Decade #11: The Souvenir 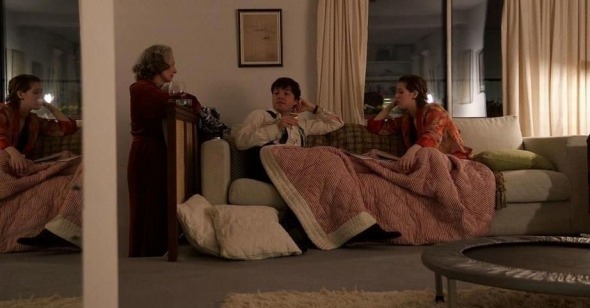 In the apartment she and I rented there were four rooms, two separated by a hallway and two linked in the center by double doors. We made one of the center rooms our living room, with a coffee table and cushions on the floor where we ate, and the stereo; when we had parties that was where everyone danced. The adjoining room had a futon in it and my computer, and we almost never went in there. When we fought about her boyfriend and she moved out, I lived in the apartment alone for several weeks. Then subletters came, and I didn’t see her again.

Nostalgia is a blunt and unedifying instrument. There have to be other ways to feel about the past. The brilliance of Joanna Hogg’s The Souvenir is that through the rigor of its reconstruction it completes the circle that emotion begins without answering for it. It sets into relief the knowledge of feeling without offering the feeling of knowledge.

Hogg recreated her own apartment from the time of the events depicted in minute detail, lacing the film with personal objects and materials (her letters, her photos, her films, her bed), her experiment brushing against the limits of its own enclosure. The way she presents the London world—the Knightsbridge flat, the film school—of her surrogate, Julie, played by Honor Swinton Byrne, is both painstakingly autobiographical (Hogg’s flat, Hogg’s school, Hogg’s love affair and tragedy) and negates autobiography. Like Henry James, whose Portrait of a Lady she has referred to as a reference, Hogg knows that exhaustive attention to the subjective transforms it into something else. The more completely you excavate the personal, the more impersonal it becomes. This is because the technical skill required to represent interiority with such a fine grain is fundamentally exterior. In that passage—through that medium—of technique, the artwork breaks off from the artist. In a sense, the closer the work hews to the artist’s experience, the more profound the break.

A friend three decades older than me reported that every year she feels like less is going on “out there” and more in her mind. I have also felt, particularly since giving birth, that my selfhood resides not in my immediate perceptions and sensations but in the accrual of memories that exist only for me. And yet I so much want to speak them. I want to know what sounds might come from within this muffled interior. And The Souvenir impelled me to admit it.

We were told to draw ourselves. When I presented mine for critique, I said I found it hard because when I looked at my face it seemed like there was no neutral. The teacher said something ironic that confused and offended me. The class was sitting in a circle in a large white room, with a wall of windows that framed Colonnade Row. That afternoon I went to the basement of the library down an inaccessible hallway to a bathroom no one used.

In Episode in the Life of a Landscape Painter, his novel about the nineteenth-century documentary painter Johann Rugendas, César Aira describes aesthetic mediation in ways that evoke Hogg’s film:

"Over the course of the day, there was a progression—though it remained incomplete—towards unmediated knowledge. It is important to remember that their point of departure was a particularly laborious kind of mediation...Direct perception was eliminated by definition. And yet, at some point, the mediation had to give way, not so much by breaking down as by building up until it became a world of its own, in whose signs it was possible to apprehend the world itself, in its primal nakedness."

Not that this world is transparent. Hogg films Swinton Byrne and Tom Burke, who plays her lover Antony, through glass, through water, through windshields, windows, in mirrors, through treated lenses. She films them with their backs turned, in profile, in mid-range where their faces are obscured. When we first see Antony, at a party, it’s only from the back; during their first rendezvous, we only see a quarter of his face. Confrontations never receive close-ups. She cuts off scenes before they conclude. Everything is slant. We’re never sure what Julie knows or doesn’t know, what she senses or doesn’t let herself see, and it takes a while before we even ask the question. Like Julie, we see the track marks on Antony’s arm, but the scene is so quiet, we might discount them too. Swinton Byrne’s performance is almost unbearably guileless; she always looks like she can’t decide how to arrange her face. When Antony’s presumptuous artist friend, played by Richard Aoyade, asks her how “a habitual heroin user” and “junior Rotarian” could possibly connect, shock clouds her vacancy.

The apartment was on the second floor of a row house a block from the highway. The super lived in the basement where he also ran a kind of illegal convenience store. Once a man with a knife walked me up against the side of a building. I gave him my wallet with six dollars in it. There was a moment of calm and confusion. I watched his back down the block, filling the sidewalk with his gait.

Hogg makes films about people whose lives are structured around the elimination and denial of suffering and struggle to comprehend their own pain. Like Edward (Tom Hiddleston), the would-be prodigal son in Hogg’s 2011 film Archipelago, Julie wants to go outside “that bubble”; she plans to make a film about a poor child in the post-industrial city of Sunderland. But Hogg’s films, while acutely aware of class, are without the bad faith of so much privileged self-indictment. Characters, most importantly Antony, voice their skepticism of Julie’s ideas throughout, but Hogg doesn’t make fun of her, or her younger self; in fact, in The Souvenir’s opening she includes the photographs and films of Sunderland she herself shot when she was young. They’re uncomfortable to watch; we know images like these (“poverty porn,” we’d call them), but in retrospect we can’t dismiss them: Hogg is trying to understand what it means to be truthful in representation, and she knows how much depends on acknowledging the honest emotion that stimulates the enactment of top-down cliché.

So much of this is familiar to me. The upper-middle-class world I grew up in is very different from the one Hogg did, but actually maybe it isn’t. Many of her questions are mine. I believe, and I tell my students, that aesthetic experience is a right and not a privilege. But what about the exquisite Fragonard painting of the girl in the pink dress carving her lover’s initials into a tree that gives the film its title, housed in the Wallace Collection (whose current website guiltily insists is presented in a “sumptuous but approachable manner”) alongside the gorgeously appointed tea room where Julie pays with her parents’ money for the champagne she drinks with Antony? Antony himself, with his love of opera, his velvet slippers, his appreciation of eighteenth-century painting, presents a very different model than the distanced fantasy of Julie’s Sunderland film, but he also knows how to make suffering aesthetic, describing his addiction as “the vile beast,” and the film recognizes the appalling truth that the authenticity of that pain is what gives his gestures their heroic pathos. But that transposition is only possible so long as the physical reality of his abjection is kept out of sight. When it erupts, violently, in Julie’s apartment, as he goes through a horrific withdrawal, it isn’t beautiful at all.

Julie moves from organizing herself around his enclosure, hovering on the outskirts of the open secret of his interior, to incorporating his absence as something that belongs to her—the absence necessary for the creation of the artwork as souvenir. At its stunning ending, when Swinton Byrne looks directly into the camera, Julie has become the author of the film we are watching. Then she leaves the set where she, and Hogg, have been filming, the enormous door of a hangar opens, and she enters a landscape as flat as the painting by Fragonard. Her pants billow in the wind like the pink dress of the woman, outlined against the sky. Like Fragonard’s figure, she becomes a subject in and through his absence.