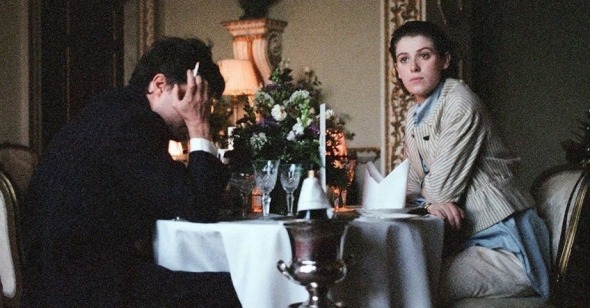 Rarely does a film come along that one wishes would never end. One litmus test for measuring a movie’s success lies in an uncanny feeling only the viewer can discern: do I long to return to my life, or am I rapt here in the theater, in company of these images and stories?

Joanna Hogg’s The Souvenir is a memorable cinematic lesson, so rich and articulated as to be better described as lived rather than seen. The emotional ecstasy it evokes is like falling in love for the first time. Indeed the film revolves around the burgeoning relationship between a young woman, Julie (Honor Swinton Byrne), and a young man, Anthony (Tom Burke). Julie is a film student in London in the early ’80s, and as we are introduced to her aspirations, it becomes clear that The Souvenir is as much about experiencing first love as it is about remembering it: a memoir in the form of fiction. It’s one-of-a-kind though, for the truly accomplished fabrications of the film originate in its most autobiographical qualities.

Hogg made three feature films prior to The Souvenir—­Unrelated (2007), Archipelago (2012) and Exhibition (2013)—following a career as a dramatic TV director. Her debut was her graduation short at London’s National Film and Television School in 1986, Caprice, starring an unknown Tilda Swinton, a close friend of Hogg’s whose career would soon be launched by Derek Jarman’s Caravaggio. Little information can be found about the short, a “science fiction” film with a thin logline reading, “A girl finds herself inside a fashion magazine.” Thirty-three years on, the lead in The Souvenir is Swinton’s 21-year-old daughter, Honor, in her first leading role, and Swinton senior plays Swinton junior’s mother. Elsewhere, Hogg drew fully and literally from her personal life to shoot a film about the experience that led her to become a filmmaker.

The title comes from the painting of the same name by Jean-Honoré Fragonard, exhibited at the Wallace Collection. Anthony ushers Julie through the gilded gallery to see the artwork on one of their first dates. As in Hogg’s other films, the characters appear caught equally in the midst of casual interactions and life-changing events. And like those films, especially Exhibition (2013), the narrative is mysterious; information is withheld and gaps are disseminated throughout. When we first meet Anthony we have already seen Julie with her art-student friends who gather at her apartment in Knightsbridge. Despite being a young employee at the Foreign Office, distant from Julie’s creative crowd, Anthony has strong opinions about art and film. A dandy in eccentric attire, sporting velvet loafers and striped socks in Paul Smith palettes, he likes the works of Michael Powell and Emeric Pressburger and questions Julie’s idea of “honest cinema” by telling her that “we don’t want to see life played out as it is.” We know that Hogg herself was influenced by those two British directors, but as a filmmaker she responds to Anthony’s statement by showing that the opposite is possible. Real life stories can be told through random fragments and glimpses, just like memory. The Souvenir’s diegesis and editing style mirror the idiosyncratic nature of “life as it is” when we replay it in our mind. At the same time, this opens up the possibility for viewers to fill in the gaps and decide for themselves. The film becomes a collaborative experience, an assumption that wonderfully matches the worlds brought to the screen by Hogg. If we could show Anthony The Souvenir today, it would demonstrate what a happy marriage it is: life played out as it was, yet fictionalized each time in a different thread by a new onlooker.

Julie and Anthony’s romance develops through the classic steps of modern courtship. He gifts her with sexy lingerie, which she sports with an ironic air that belies her pride at embodying an object of desire for the first time. Julie introduces Anthony to her wealthy parents, who live with their hunting dogs in a countryside villa carpeted with pastel highlights, a comfortable cocoon that is the perfect correlative of their Commonwealth-y social status. Anthony escorts Julie on a sensual, luxurious trip to Venice, both a reference to his old-fashioned, Grand Tour-inspired lifestyle and a harbinger of the decadent dread that sets upon them when they return home. As he subtly moves into her apartment, the set design (masterfully created by Stéphane Collonge) tracks the invasion. Furniture is rearranged, chandeliers replace simple lamps, and a massive wicker bed appears in the bedroom. When her flat is broken into, naïve Julie starts to pick up on the hints we’ve been collecting thus far: Anthony’s frequent borrowing of money, his occasional disappearances, the scarce details of his private life. The one time that Anthony does bring a friend around for dinner, it’s an obnoxiously arrogant filmmaker (a hilarious cameo from British comedian Richard Ayoade) who condescendingly insinuates Anthony’s heroin addiction.

The more Anthony’s vampiric behavior distracts Julie from her ambitions, the more she attempts to anchor her identity in writing, a search for stability in the crumbling affair. Separations and reconciliations are marked by Anthony’s letters, read in his voice over while misty wide-shots of the British fields provide an enigmatic visual commentary. Their relationship is punctuated by these and other communication devices, which help recount their story without always showing them interacting onscreen. Hogg is fond of this design: her previous films adeptly employ telephones and intercoms to maintain distance. Conversations feel one-sided, and sometimes we don’t hear the person on the other end. In The Souvenir, the form changes: Julie’s resolution towards each new film project is marked by a typewritten list. An aspiring filmmaker, she is more often depicted in front of the typewriter than behind the camera. Despite her young age, the struggle to structure and justify the production of art is already part of her personality, hinting at another recurring theme for Hogg: the representation of the creative mind at work—typically in the image of female and immaterial labor.

Hogg’s text-based devices are certainly representative of the period in which the film is set, but could also refer to Hogg’s script, which she described as “a written and illustrated document about 30 pages long ... It includes photographs and drawings and also includes description of the internal lives of the characters ... It’s really a kind of atlas for myself.” The film opens with black-and-white photographs of Sunderland, a port town in northeast England, where Julie intends to research the struggling working class. Off-screen her gentle voice pitches a project to a local radio station, openly addressing the discrepancy between her privileged background and the subjects of her photographic interest. In fact, the slides were taken by Hogg herself when she was in her twenties. From the very beginning, the use of such visual artifacts reinforces the connection between the autobiographical material and its fictionalization. In several sequences the camera gazes from the windows in Julie’s apartment, where the rooftops of central London rise out of focus against the indigo sky. These landscapes are also snapshots of the view from Hogg’s apartment when she was a film student. The set design becomes a literal collage of memoir and fiction: a fabrication of time through space that extends well beyond the purview of historical reconstruction.

Standing by her flat window one morning, Julie is startled by the shuddering boom of the explosion from the IRA’s 1983 bombing of Harrods department store. Placing the source of tragedy outside the frame and conveying it through enhanced or distorted sound isn’t a new strategy for Hogg. In her first two features, Unrelated and Archipelago, the director used off-screen voices to dramatize key scenes. This approach is replicated in purely visual sequences, by removing or concealing the physical presence of the actors and letting spatial arrangement (distorted proportions of indoor vs. outdoor, sharpness vs. blur, lighting contrast) speak for the characters’ emotions. Hogg’s cinematic language relies on unobtrusive framing, often supported by interior architecture and composition. Her rigorously still camera rarely zooms or moves—and when it does, it has the power of revelation.

The representation of off-screen political turmoil is also indicative of Hogg’s class-consciousness. Julie strives to become a socially engaged artist while her parents pay her rent. Yet the truly patronizing ones are her professors, who caution her for being too distant from the milieu she is interested in as a filmmaker. Grown-up Joanna must have internalized this criticism. All her films, typically set in houses equipped with class personalities of their own, can be described as chamber plays about the British bourgeoisie, hence the flat tone that runs through much of the dialogue (except, in The Souvenir, a particularly animated conversation lamenting the lack of original musicals in Britain—though Hogg does include British pop and rock hits in the soundtrack, a first for a director used to working with diegetic soundscapes). Partly mimicking the hypocrisy of the establishment, at other times offering jolts of sudden amusement, this genteel register makes the drama of The Souvenir all the more unsettling and relatable. The title at the very end of the rolling credits announcing “The Souvenir Part II Coming Soon” belongs to the same sophisticated language that appropriates “low” and “highbrow culture” for both derision and complicity: mocking James Bond or The Avengers while reassuring the viewer that the experience is not over yet.

A sequel is indeed in the making. Joanna Hogg’s intentions toward a semi-serial product bring to mind the literary career of Annie Ernaux, a French author 20 years her senior. Scattered through dozens of books, Ernaux’s lifelong quest has been to achieve collective storytelling through autobiographical matters. In one of her many memoirs, she writes about her loss of innocence as a young woman: “How do we cope, all of us, with the situation that presents itself to us at the beginning of our life, first the obligation to do something for a living, then the moment of the choice and finally, the feeling of being, or not being, there where we were supposed to be?” Under this light, Anthony looks like a prism in Julie’s world. He is an actor: a constant performance of sobriety, the most extreme manifestation of despair. She tells him, “don't lie,” and in that instance she learns the art of suspending disbelief. Her desire, her sense of (his) fiction and reality, her acknowledgment of herself: her story is not just the tale of becoming a person and an artist—it is about the birth of an idea of cinema. One we are also, gratefully, a part of.