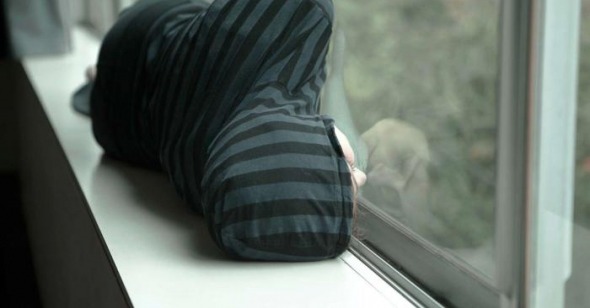 The ever-present debate over whether film is primarily indebted to the visual or strictly narrative arts has always been particularly applicable to British cinema, coming as it does from a culture most renowned for its literature and theater. Though there is a history of dialogue-driven films by artists as varied as No√ęl Coward and Mike Leigh, there is an equally compelling vein of British cinema composed of visual artists-turned-filmmakers, ranging from Peter Greenaway to Steve McQueen. The latest in this lineage is Joanna Hogg, who emerged with Unrelated in 2007 and Archipelago in 2010. Despite her background in television, a form that is often said to excel at character and story at the expense of visual expression, Hogg‚Äôs consciousness of the dramatic power of image and sound is clearly more in line with the work of Greenaway and McQueen than with that of her fellow small-screen directors.

Her new film, Exhibition, concerns a pair of middle-aged artists, known only as D (played by punk guitarist Viv Albertine) and H (conceptual artist Liam Gillick), in the process of selling their London home. It‚Äôs a sleek, modern, multistory house full of large windows and stark white walls that often feels like a character in its own right. D and H clearly love each other, though a chilly emotional divide is developing between the two, as is a sexual distance demonstrated in one of the film‚Äôs most overtly comic scenes, in which H tries to get D in the mood as she lies limp and listless on their bed. Rather than use dialogue and clear plot points to explore the emotional effects of parting with a beloved home and drawing away from a partner, Hogg illuminates D‚Äôs experiences via nearly wordless, quotidian episodes of meals and work days. There are frequent shots of D wrapping herself around wall corners, lying on household surfaces, and crouching under tables, as though trying to physically merge with her environment, communicating her deeply personal connection to her home in ways that transcend language.

This sensual approach to story is perhaps most effective in scenes that show D working. One of the film‚Äôs most remarkable qualities is its insistence on representing the tedium of artists‚Äô everyday routines. Where other films might depict the emotional torment or the history-making flashes of brilliance, Hogg opts for long periods of boredom and distraction, punctuated by moments of gradual progress, a choice that emphasizes the maddening inconsistency of the artistic process. Though D is a visual artist, she is equally (if not more) attuned to her aural environment, and the psychological insight and emotional impact of these scenes derive both from the small, mundane gestures (like D‚Äôs frequent intercom calls to H) and the layered, detailed soundtrack, featuring aural intrusions outside D‚Äôs window that range from blaring car alarms to conversations in Arabic. Hogg‚Äôs creation of equally rich visual and aural landscapes, accompanied by little dialogue and action, results in a film that, like so much of art cinema today, often feels as much like a gallery installation as a traditional narrative.

Throughout the rest of the film, emotional changes are signaled primarily through the steady evolution of visual style. The film begins with static shots and long takes, blue-hued, diffused lighting, and carefully composed details within the frame. However, about midway through, Hogg transitions seamlessly to a fantasy sequence, apparently D‚Äôs dream, in which she and H discuss their emotional distance in an onstage interview. As they communicate their frustrations about each other and their responses to each other‚Äôs art, the conversation serves to only compound their exasperation. The lighting in this scene is sharp and high contrast‚ÄĒthey are illuminated by stage lights, surrounded by deep, black darkness, which emphasizes their continued estrangement from one another. Though their words are unable to bridge the gulf between them, an injection of warmth in the film‚Äôs aesthetic anticipates the renewed emotional and sexual openness later in the sequence. As the pair winds through hallways to a hotel room, the camera trails behind, lovingly capturing them in an amber-hued, slow motion tracking shot. This is followed by a sex scene that maintains this cozy, intimate feeling‚ÄĒthe soft yellow light and the camera‚Äôs distanced, slightly obscuring vantage point lend the scene the feeling of a fond, burnished memory.

Story-wise, little happens over the course of Exhibition‚Äôs run time (though the sex does improve considerably). Unbound to a conception of time as mere forward progression, Hogg luxuriates in the endless sensations one can experience at any given moment. Though it is not narrative-driven, Exhibition is not a strictly aesthetic exercise either. In fact, it is a deeply emotional work, sensitively attuned to the constantly shifting feelings and dynamics of its characters. Exhibition is cinematically elemental: above all a poignant celebration of image and sound.