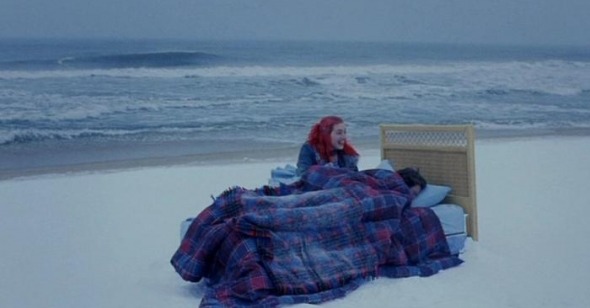 Eternal Sunshine of the Spotless Mind could be one of those precious, necessarily rare things: like Breathless or 2001, a paradigmatic film for a generation. The film’s conceit is ingenious in its genre-ductility: Jim Carrey and Kate Winslet’s characters (respectively: boyfriend, memory-of-girlfriend) flee across the landscape of his memory while it’s being forcibly forgotten—thanks to Lacuna, a therapeutic brain surgery service that offers to erase all those unpleasant thought-crumbs of ex-boyfriends, ex-girlfriends, and the recently deceased. What makes screenwriter Charlie Kaufman and director Michel Gondry’s film consequently so intimidating is how it is able to think like many different films simultaneously: a romantic comedy by Alain Resnais, a listlessly unbeautiful indie flick, a formalistic trick movie like Memento, a self-consciously aesthetic art film, suffused with strange imagery (the faceless people in Sunshine are straight out of Hiroshi Teshigahara’s The Face of Another), a hedonistic teen flick replete with inebriated, tank-topped girl, a screwball drama, a black comedy satirizing the intrusive efficiency of machines, and a love story whose characters brim with more reality than a reservoir of Mystic Rivers. Eternal Sunshine of the Spotless Mind’s willingness to trot across the borders of genre, its syncretistic way of unifying all these narrative modes—all these things make it at once poetic and spiritual. The film is a metaphysical chase movie—the villain we flee from is forgetting.

But what exactly about Eternal Sunshine is spiritual? This question demands another preliminary question: what becomes of spirituality in a scientific age? And if there can be a secular spirituality, how is it distinct from sociology or psychology? Once we become bereft of God, spirituality becomes privatized, shunts inward, molts off the social, longs for private rather than profound truths. Spirituality forks away from philosophy because (perhaps to philosophy’s credit) philosophy is too comprehensible; spirituality has no moving parts, no planks of argument: it is necessarily ineffable, interpretive and “intuitive” rather than analytical—it is the roadless road that arcs over chasms unbridgeable by syllogism. Instead, in a non-metaphysical age, the subject matter of secular spirituality ceases to be truth; the subject matter of spirituality becomes the self. As Richard Rorty writes in Contingency, Irony, and Solidarity, “The process of coming to know oneself, confronting one’s contingency, tracking one’s causes home, is identical with the process of inventing a new language—that is, of thinking up some new metaphors.” Our version of spirituality, therefore, asks us to interpret life—to invent our life’s own story, its unique descriptive language—rather than propose an answer for it. Our preexisting tools of interpretation—the rich cultural density of the novel and the abstracting truth of poems—thus becomes analogous to spiritual searching. Our life becomes a story and the supple, mystic emotions we associate with love and longing, regret and desire, start to seem somehow more profound than the puny omnipotence of God. This is why when D.H. Lawrence writes: “Sometimes life takes hold of one, carries the body along, accomplishes one’s history, and yet is not real, but leaves oneself as it were slurred over,” to describe the desperate life of a poor coal miner’s wife, he seems “spiritual” (though not theological) in a way that “Make a joyful noise unto God, all ye lands/ Sing forth the honor of his name/ make his praise glorious” (Psalm 66; King James) does not. What we require of our modern spirituality is intimate content—the wisdom of usefully idiosyncratic thought.

Eternal Sunshine of the Spotless Mind feels spiritual because of the way it imbues film with this specifically literary content. It is the foremost example of what could be called avant garde realism—which might also describe films such as Wong Kar-wai’s Ashes of Time and Tsai Ming-liang’s The Hole, a type of realism that solves, dissolves, and welds together the intellectual resources of surrealism and its opposite, cinema verité. The fault of surrealism is that its mysteriousness arises from its irrelevance—surrealist images have a hard time creeping into meaning, a hard time becoming pertinent to our identity, because they resist paraphrase and explicit meaning; the fault of cinema verité is that, while it is full of life, it is a factless life, a life jailed to the moment: this is the image- oriented psychology of film rather than the thought-dense introspection of novels. Eternal Sunshine solves these genre maladies through its conceit: the first two-thirds of the film occur within the protagonist’s memory, so the otherwise “realist” film can deploy any number of non-realist conventions (a character meta-fictionally aware that she is only a memory; people disappearing as they’re forgotten; Jim Carrey surrounded by giant furniture, stuck in the memory of his baby self) without them actually becoming non-realist: they are real to their context, the way that a dream is a real dream.

Eternal Sunshine unleashes an arsenal of surrealist and meta-fictional techniques while simultaneously vitiating the pernicious formalism of these techniques: the surrealism and meta-fiction are never aesthetic ends in themselves, but means towards the more old-fashioned goal of characterization. When Jim Carrey’s character Joel, for example, encounters people he’s already forgotten, he finds them without faces. Despite the image’s sultry artistry, it is less like the novels of Haruki Murakami (The Wind-Up Bird Chronicle has a man with no face who works in a nightmare hotel) or the preciously mysterious images of David Lynch, than it is like Dante. Image in Dante is the literalization of metaphor. Metaphors are covert arguments: they use similarity to induce a thesis of the compared objects. Because of this, Dante’s characters are almost like sentient aphorisms, living essays on vice and virtue; this is why Dante still feels “spiritual” to non-Christians. The images in have a similar metaphysical purity—the purity of metaphor. An amnesiac mind is a bookstore whose books are shelved spine-in, so we cannot read the titles. A house is forgotten and the planks quake apart, obliterated into the sky—until Joel finds himself on the lonely twilit shore of zero memory. A man who we know of but haven’t really gotten a good look at—the movie conceptualizes him as a man we can only see by the back of his head: Joel keeps turning him around, trying to talk to him, but the man only has the back of his head. More generally, the way Joel travels between memories suggests that memories are locations, rooms we can hop and teleport between simply by remembering them.

If the poetic parallel of Sunshine is Dante, then the novelistic parallel is Proust—and not merely in the use of memory as subject matter. The characters in Eternal Sunshine—like Proust’s—possess an ironic, usable past. This is to be expected in novels but rare in films, which are usually too short and action-oriented (rather than habit-oriented) to give us the mellow, quotidian texture of characters “accomplishing their history.” In Sunshine, however, we see both cause and effect, usually cleaved far apart and in mundane, quirky ways. When Winslet’s Clementine first meets Joel, she says “Okay, no jokes about my name.” Joel naively replies that he doesn’t know any. Here, we underestimate the movie and assume Joel’s cultural innocence is a mix of his own shyness and a sort of Fifties Hollywood veneration of bland boy scouts and Luke Wilson-milquetoast. Later, Kaufman and Gondry reveal that Joel merely had all of his Clementine-affiliated memories erased. We’re presented with an earlier scene of Joel and Clementine really meeting for the first time. The film deconstructs Joel’s civility—in reality, the memory-intact Joel meets Clementine and instantly starts singing a boorish rendition of the song of the same name (“Oh my darling…”). The scene is psychologically telling in another way: both times, meeting Joel for the first time, Clementine asks him not to make fun of her name in nearly the exact same way. Similarly, at the end of the film, she makes a speech about how she’s not good girlfriend material; the poignant predictive value of her statement (they did break up, after all) is made comically thicker by how she gave a very similar speech earlier in the movie, when she and Joel meet for the first time. The repetition is tenderly accurate—Clementine repeats herself the way normal people do, mired in the inevitability of their routines, wielding their actions and phrases like reliable tools.

The problem with movies is that they are usually about situations rather than selves. Like Citizen Kane and Annie Hall, Eternal Sunshine of the Spotless Mind tries to turn film into a psychologically dense medium by first turning it into a dense medium; it uses temporal cross-cutting and lets the dialog leap up and down the diegetic ladder, conflating the soliloquy-like effects of voiceover with regular conversation. The former broadens the film’s breadth, letting it annex all of Joel’s memories, so the entire relationship (plus childhood) become ready narrative material; the latter saturates the film with a tender, memoir-like thickness—because both characters are aware they are memories, they can say extra-diegetic reflections. Memory becomes dialogue. When Joel first meets Clementine, she asks for a piece of chicken and, before he answers, as she is picking at his plate, Joel tells her “And then you just took it—without waiting for an answer—so intimate like we were already lovers.”

Eternal Sunshine of the Spotless Mind spiritualizes film by novelizing it and poeticizing it at the same time. The former fine-tunes the movie until it achieves psychological definition, the latter metaphysical. But when spirituality turns secular, we must abolish any attempt to prioritize the metaphysical over the psychological; what matters is meaning rather than truth. The film focuses these lenses on what could be called spiritual subject matter: it asks, how much control we have over our private truths (memory, our version of the truth), asks whether we are the God of our own memories or not. This is really a question of autonomy and autonomy is really an inverted question of fate. Fate appears to be benevolent in the usual Hollywood way: almost mystically—how did they find each other at Montauk?—the film ends with the characters meeting for the first time again. But fate is also confining: Clementine is forced to be as finite as a self and so repeats her silly speeches; more touchingly, in the final scene, Joel and Clementine hear tape-recorded confessions they made before their amnesia, each of them reciting a hurtful catalog of the other person’s faults. These faults are hurtfully irrevocable because the past—unlike memory—cannot be erased. They look at each other, hopeful but wounded, awkwardly armed with the evidence rather than the memory of their relationship, wondering if they are already trapped by their past, wondering whether these shards of memory will predict their future.