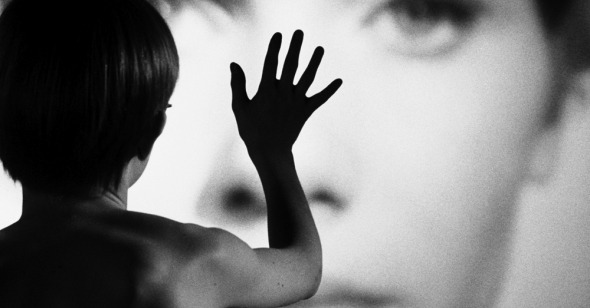 Flesh and the Word
Andrew Tracy on Persona

In one of the most famous scenes in Ingmar Bergman’s Persona, the nurse Alma (Bibi Andersson) recounts to her mute patient Elisabet Vogler (Liv Ullmann), the story of an impromptu group-sex encounter she once had on a beach. Bergman gently cuts around the room as Alma’s voice continues unbroken over the soundtrack: the opening medium shot of the two women together gives way to a series of singles as the naive younger woman, encouraged by the attentiveness of her silent audience of one and carried away on the tide of her own words, not only relives her memory but reveals, to both her listener and her previously unknowing self, the ecstatic joy she experienced in this moment of carnal abandon—an intensity of pleasure that she had never before (and never since) experienced in her straitened, thoroughly conventional life.

The looseness, the deceptive casualness of the shooting and framing in this scene stands in stark contrast to the rigidly poised, “presentational” mien of the film’s most famous images, where Bergman uses intense close-ups and the boxy frame of the 1.37:1 Academy ratio to pack the two women’s heads together as if in a display case. Bergman always had an affinity (or a weakness) for affectedly posed images, but in this sequence his quiet cutting between individual mediums and close-ups of the two reclining women keeps the focus on the vivid images conjured up by Alma’s words. Late in the scene, when he has the previously sedentary Alma walk to a window and look out at the night sky, the camera calmly regarding the back of her head in a medium close-up, he cleverly uses his subtly following but essentially still camera to punch up the dramatic impact of the scene: when Alma reaches a breaking point in her story, she whirls around and takes a couple of steps toward the camera, bringing her desperate face into intense close-up.

While Persona amply demonstrates how Bergman had, by this point in his film career, pretty well mastered the ability to use the square frame as both seemingly neutral observer of and emphatic commentator on his dramatic action, the presence of this sustained, psychologically driven—let’s call it “theatrical”—monologue within the director’s most assertively modernist, film-conscious film to that time gives rise to some key questions regarding Bergman’s cinema aesthetic. While many of his first run of films in the mid-to-late 1940s derived from stage plays—hardly surprising given his parallel, even more prolific artistic career in the theater—the works that made his international reputation in the fifties were celebrated precisely for what was deemed their veritable renaissance of film form: in a rapturous review, Godard adjudged that Summer with Monika “is to the cinema today what Birth of a Nation was to the classical cinema.” Drawing attention to Bergman’s employment of “those devices beloved of the avant-gardists of the thirties,” Godard argued that “as used [here], those mannered compositions, those bizarre angles, those shots of clouds, lakes, undergrowth, are not gratuitous camera tricks or technical virtuosity. On the contrary, Bergman always manages to integrate them into the psychology of his characters at the precise instant when he must evoke a precise feeling.”

If it is not always 20/20, hindsight can at least lend greater credence to the position that, frequently throughout Bergman’s work in the 1950s, the use of these outmoded devices is indeed gratuitous: an impasting of ostentatiously “cinematic” techniques onto his brooding, overdetermined scenarios, the claustrophobic psychological feverishness of which made them feel stagebound even when they took place en plein air. Even as Bergman learned how to more fluidly integrate these devices into his narratives (e.g., the Buñuelian dream sequences and seamless time slippages of Wild Strawberries), they still tend to feel illustrative of, rather than inherent to, the drama—the accomplished but extraneous visual accompaniment to a safely demarcated, diegetically self-sufficient dramatic world that has been worked out in words prior to the introduction of its images.

By contrast, the disorienting, nightmarish montage that opens Persona announces this film as one seeking out interiority through images—and further, one that is reflexively conscious of its own image-making. Found footage—of genitals, early animation, and silent-comedy shenanigans, a sheep having its throat cut and its innards removed—gives way to Bergman’s own images: a hand having a nail driven through it; intercut shots of an elderly woman, an elderly man, and a young boy laid out on a morgue slab; and a shock cut as the woman suddenly opens her eyes and the boy wakes up, turns over and begins reading a book. Putting on a pair of glasses, the boy turns toward us and reaches his hand out toward the screen; a reverse shot then depicts him from behind, running his palm over a surface on which the blurred image of a woman’s face is being projected.

While the narrative that follows will offer some potential interpretive openings for these images—Stanley Kauffmann, for one, read this opening montage as an alternately abstract and symbolic rendering of Elisabet’s consciousness, speculating that the boy is Elisabet’s otherwise unseen son and the visage on the screen her own face distorted beyond recognition—this sequence is ultimately, and one must suppose designedly, unreadable. It is not mental space, allegorical space, or any other space apart from the space of film, that phantom kingdom of images whose very falsity is the proof of its ineradicable existence.

Artifice, play-acting, and masquerade had been recurring motifs in Bergman’s work in the 1950s, but primarily on a literal level: the pathetic circus troupe of Sawdust and Tinsel, the traveling players of The Seventh Seal, the amorous deceptions of Eva Dahlbeck’s actress in Smiles of a Summer Night, Max von Sydow’s shamming sorcerer in The Magician. With its opening image of a film projector sputtering into life and emitting a beam of light, Persona announces its falsity up front. And even as Bergman then quickly draws the viewer into his scenario, this prelude has already established at least three realms of space within his film: the cinematic space of the frame, as explicitly defined in the employment of archaic film clips alongside Bergman’s own original footage; the dramatic space of the narrative proper (i.e., the escalating battle of wills between Alma and Elisabet, and the resultant psychological fallout on both sides); and the space of that narrative’s existence as (a) film—as fiction, fabrication, as machine-made artifact.

Whereas in Wild Strawberries the psychic life of the film’s protagonist is safely bracketed off from the “reality” of the narrative, in Persona reality itself—namely, the film—fractures along with its characters’ psyches. The opening montage’s parade of suggestive but finally indecipherable cinematic horrors—which can be convincingly, if certainly not exclusively, read as an oblique representation of Elisabet’s wounded mind—is paralleled later on by the famous representation of her vengeful caregiver’s psychic deterioration: as Alma stares out of the window in fierce triumph when she hears Elisabet cry out in pain after stepping on glass shards that she deliberately left in her patient’s path, her face disintegrates as the film itself seems to catch and burn in the projector.

That none of this reads, in the experience of watching the film, as the most painfully reductive kind of literalism-in-modernism’s-clothing is a testament to the intricacy, elegance, and force with which Bergman intertwines the spaces of diegetic action and authorial reflexivity. (Though perhaps we should say “technological reflexivity,” as Bergman foregrounds the mechanism more than the maker.) But there is yet another space operative here, a space that is highlighted by Alma’s carnal confession—a space that is not often considered as a properly “cinematic” space. It is a space that Bergman had evidently been thinking about and bringing ever closer to the foreground of his cinema in the half-decade preceding Persona. In Winter Light—the second film of an unofficial trilogy that also comprises Through a Glass Darkly and The Silence—Bergman has Ingrid Thulin’s pining schoolmistress Marta narrate, direct to the camera, the contents of the letter she has written to her former lover. With this one striking yet utterly simple device, Bergman collapses together a number of different realms of space. There is, first, the diegetic space of the narrative, as the history of the characters’ painful relationship is laid out before the viewer. There is, we may say, a theatrical space, as Thulin’s direct-to-camera monologue mimics the direct-to-audience address that is a common stage device. And, simultaneous and concomitant with this, there is a cinematic space, as the enclosing square of the frame contains Thulin in a diegetic no-place—a space that, stripped of all other referents, can only be cinema.

Finally, there is a space of words—a space that is conjoined to the presence of Thulin herself, as the speaker of those words, but one that has an existence apart from her. By fixing unblinkingly on Thulin’s face for nearly six minutes as she delivers this monologue, Bergman establishes words as a wholly cinematic element in their own right: an element that physically fills space in the film, that constitutes one of the indissoluble foundations of the film.

On the face of it, Alma’s monologue in Persona is not as formally daring as this sequence from Winter Light. It is, nominally, a dramatic scene between two characters rather than a direct, fourth-wall-breaking address to the camera; it breaks up the monologue over several shots rather than confining it to one. Yet within this most formally disruptive of Bergman’s films, this seemingly conventional diegetic scene not only extends, but expands upon Winter Light’s privileging of words. Even as the scene builds to its small-scale climax of self-discovery, there is a liturgical aspect to the monologue that places it both within and beyond drama. While Andersson brilliantly declaims it (and with increasing emotion), there is no extraneous coloring to the speech; she does not “play off” the words but inhabits them, or rather lets them inhabit her, lets herself be carried along by their propulsive force. And even as we may wonder what Elisabet may be thinking of these revelations, and of Alma, behind her impassive, sphinx-like mask (and indeed, her later-expressed thoughts on these matters will occasion Alma’s turn from attentive caregiver to implacable adversary), her muteness here makes her a surrogate for our mute, observing selves in the audience—witnesses to this outpouring of words, attendants on the sovereignty of these words in this block of filmic space.

But if Bergman’s words here definitively, assertively occupy this space, they point toward spaces beyond it. The vividness, the explicitness of detail in this monologue conjures up a whole other realm of intensely visualized action absent the intercession of the visual. Through their bodiless medium, these words not only evoke but create a sensuous, felt physical reality—a whole other space of action, of existence, beyond the start and end points of this one film (points that Bergman duly signals by showing a projector revving up at film’s beginning and running down at its conclusion). Just as he understood that artistic reflexivity, the “baring of the device,” could potentially offer a greater access to the real (rather than just a glib disavowal of its existence), so Bergman divined that strategically restricting his means of expression—dispensing with those rickety, “expressive,” “purely cinematic” tricks that marked his work in the previous decade and putting his faith in forms beyond the strictly visual—could open up vistas of space that had seldom before been seen in the cinema. While Persona is celebrated for illuminating the landscape of the mind, its landscapes extend much farther: beyond its protagonists’ minds, beyond the film of which they are a part, beyond what we can see with (only) our eyes. 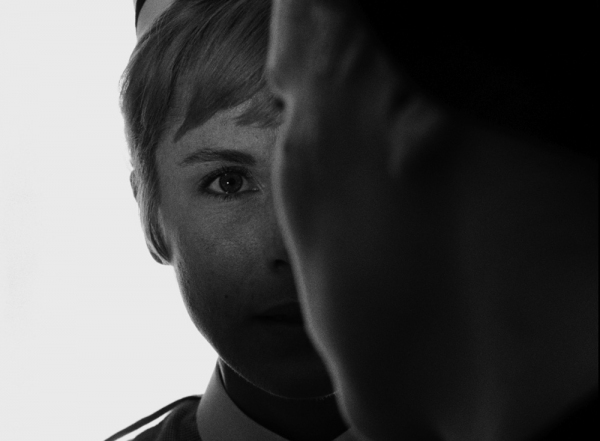