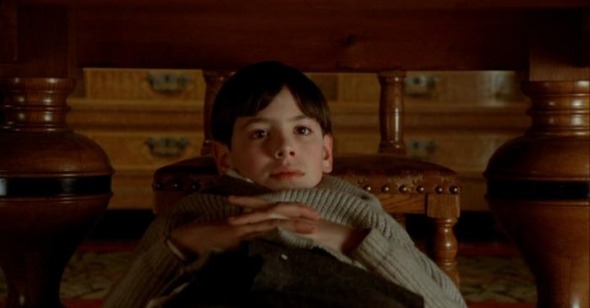 After the Ball
Max Nelson on Fanny and Alexander

The extended Christmas party that opens Ingmar Bergman’s Fanny and Alexander doesn’t wrap up until close to 3 a.m. Leaving the cleanup of their family’s palatial house to a handful of servants, the Ekdahl parents head to bed, just as their restless children convene for a late-night magic lantern show. Ten-year-old ringleader Alexander (Bertil Guve) lights a flame, and soon the flickering amber light condenses into images: a woman dreaming, a flash of sunlight, and a ghost descending towards her in real, live, miraculous motion. The crowd, which includes Alexander’s angelic sister, Fanny (Pernilla Allwin), sits by starry-eyed in adoration—three pint-sized magi, witnessing the birth of cinema.

What might have made Bergman name his intended swan song Fanny and Alexander? The brother-sister duo is the closest thing this film has to protagonists: we follow them from their family’s Christmas celebration to the death of their kindly father, Oscar (Allan Edwall), to their mother’s remarriage to a puritanical bishop, and finally to their rescue at the hands of a mysterious family friend. But Fanny and Alexander, especially in Bergman’s preferred five-and-a-half-hour-long miniseries, is as much about the many colorful grownups in the kids’ orbit as it is about the pair themselves, who often come off as opaque ciphers by comparison. With a few exceptions— notably Alexander’s resistance to his stepfather’s iron will—they tend to float through the film’s sequence of events, being acted upon by others and watching others act, reduced all the while to two pairs of passive, searching eyes.

It’s Alexander’s bright, black eyes that open the film, peering through the curtains of a miniature puppet theater. (“I reconstruct in detail a few moments from my childhood sixty years ago,” Bergman noted on set. “It’s a strange feeling.”) Soon Alexander steps out into the family living room, an opulent, overstuffed menagerie of pillows, statues, paintings, and plants, all ivory whites and rich, deep reds. No one’s home. Crawling under the table, Alexander watches a well-formed female statue raise its hand absent-mindedly; hearing an ominous scraping, he turns to see a grim reaper dragging its scythe across the floor. It’s unclear whether we’re in the Ekdahl mansion or the burrows of Alexander’s consciousness, or even whether it’s possible to separate the two.

Fanny and Alexander is equally occupied with looking forward and looking back: it’s an aging filmmaker’s attempt to reinhabit the way of seeing he knew as a child, but also to peek in on adult life through that child’s eyes. Bergman had an acute eye for the way people come over time to distinguish themselves from others, how they sculpt, knead, and condense their childhood selves into well-defined grownup ones. His film is accordingly obsessed with social role-playing and mask-wearing, from Oscar’s (prophetic) part as the ghost in Hamlet to the bishop’s tortured confession to his much younger wife: “You once said that you were always changing masks, so that finally you didn't know who you were. I have only one mask—but it is branded into my flesh.”

Perhaps Bergman saw in Alexander a chance to look through as-yet-unmasked eyes, to let the world appear in all its business and all its irreducibility, its borders still permeable to the imagination. If it’s hard to distinguish the Ekdahls’ home from Alexander’s perception of it, it’s because the place seems designed to correspond to this kid’s way of seeing. With its overabundance of detail, its stylistic inconsistencies, its haphazard layout, its hidden nooks and crannies, and its bright, vivid colors, it comes off as both the object of Alexander’s gaze and a product of his imagination, a concrete representation of what it’s like to take in the world through his eyes. Perhaps Bergman named the film after two children because their habits of seeing weren’t that far from filmmaking itself, in which to perceive a room, a house, or a world is to invent (or reinvent) it according to one’s own specifications; in which to see is to create.

For his intended final film (Bergman’s true final work, Saraband, would come twenty years later), Bergman cultivated a style that, for all its maturity and refinement, felt like a regression: a step back into childhood, but also towards the invention of the movies themselves. At times Fanny and Alexander plays like the cinema’s family tree, with different branches reserved for the theater, the magic lantern, the puppet show, even traditional storytelling. In each case, Bergman homes in on the hands-on work of artistic creation: the stop-start rhythm of Oscar’s Hamlet rehearsals, which ultimately leave him flattened by exhaustion, the business of dusting, unscrewing, and lighting a lantern. In one extended monologue, Oscar seizes an ordinary nursery chair and casts it as a three-thousand-year-old Chinese relic, adding twist after twist to the seat’s fate until every fleck of its peeling paint and every dent in its battered frame are loaded down with historical weight. With every one of Oscar’s increasingly strained breaths, the chair takes on more physical, three-dimensional presence, as if being painstakingly conjured into existence on the spot.

That makes Fanny and Alexander sound like work; instead, if anything, it’s a reminder of what it means to be in love with one’s work. Bergman, so often billed as a chilly perfectionist, drops the chilliness but clings to the perfectionism, savoring every chance to catch the light streaming down a character’s face at just the right moment, to tinker a bit more with a given shot’s color scheme, to add a little more detail to the edges of the frame. The film’s third act unfurls in a cramped, cozy antique store presided over by Ekdahl family friend Isak (Erland Josephson), a place crammed full of puppets, mirrors, curtains and wardrobes. It’s Bergman’s excuse to pack each frame with as many visual ideas as he possibly can, but also a warning that even his love for seeing and showing has its ethical limits. Deep within the shop’s network of back rooms, Alexander encounters the jailed, androgynous Ismael (Stina Ekblad), who gives him a chance at revenge against his hated stepfather: all he has to do is visualize the bishop’s death. All Bergman has to do, too, is cut to a fire and a screaming figure; he does. “I don’t want to,” Alexander tells Ismael in voice-over as the flaming human being tumbles into view. “It’s too late,” comes the reply. In the world of Fanny and Alexander, looks can—and do—kill.

It’s comforting that a filmmaker so prone to doubt—be it in himself, others, or God—intended to conclude his career with a declaration of faith. Fanny and Alexander is a celebration of the act of looking, in all its power to invent, animate, and destroy; it goes so far as to suggest that the things seen owe their qualities, their presence, even their existence to the seer. Yet Fanny and Alexander is anything but solipsistic; rather, it’s one of the movies’ most empathetic and emotionally unguarded group portraits: Bergman shows complete willingness to give all (or nearly all) his characters the right to adopt his rarified way of seeing, to make films in their heads.

After the family Christmas party, Ekdahl grandmother Helena (Gunn Wållgren) curls up with Isak on the sofa, listening to the family house fall slowly asleep. She gossips, sheds tears, and laughs; he listens and nods. At one point she lets slip that they used to be lovers, but their tender, prolonged kiss at scene’s end is thoroughly platonic, less an act of passion than of reciprocal consolation. It’s a beautifully written exchange, and one of surprisingly few overt references to the process of aging in a film so suffused with a sense of time’s passing. But there’s another dialogue in the same scene, between two pairs of eyes: Isak’s, crinkled, affectionate, tolerant, and Helena’s, shining, anxious, groping for comfort. What are they creating, looking at one another? Are they calling up intimate moments long since past, or are they simply making one another present, available, embraceable? In a film saturated with magic and mystery, the origin of compassion might be the greatest unknown quality of all. All we know is that it’s in the eyes—and on the screen.

The full miniseries version of Fanny and Alexander played December 22 and 23 at the Museum of the Moving Image as part of the series See It Big, copresented by Reverse Shot.