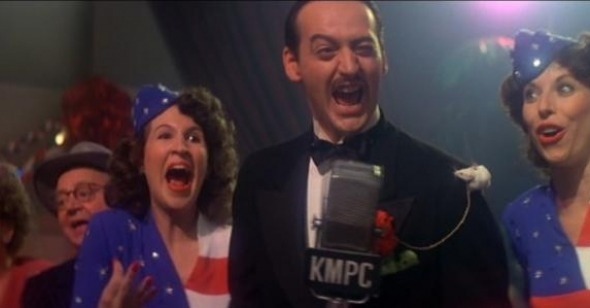 For those familiar only with 1941 for its reputation as a misfire of epic proportions and disastrous critical reception, it might seem ludicrous to assert that the film somehow manages to speak soberly and presciently to certain political realities of life during wartime. How could a film pitched as a “Comedy Spectacular,” and which Spielberg himself chalks off as “a good opportunity to break a lot of stuff,” speak to difficult global realities? The initial receipts (co-scripter Bob Gale claims the film made a profit, but with a $35 million budget and a $34 million domestic gross, it must have had a terrific run overseas) indicate that viewers found it barely worthy of the year it eulogized, much less the one that birthed it, 1979, rocked as it was by the expulsion of the U.S.-backed Shah in Iran and subsequent hostage crisis, the ascendancy of conservative Margaret Thatcher to the Prime Minister post in Great Britain, and the invasion of Afghanistan by the Soviet Union. (Does this sound awfully familiar?) However, arriving at the approximate midpoint between the two most devastating acts of war ever carried out on American soil, 1941 is a prophetic vision for anyone who’s thought seriously about buying some duct tape or packing their home and fleeing from residency in a major city during a crisis. Its broad stabs at humor and gung-ho go-America sheen suggest red meat patriotism, but 1941 puts a slyly subversive politic at play.

Robert Zemeckis, who co-wrote the script with Gale, notes in a making-of documentary on the DVD that their intention was to write a “really dark comedy” about an amusing piece of post–Pearl Harbor historical trivia: an imagined assault on Los Angeles that resulted in an all-night firefight against a nonexistent foe. 1941 may have been conceived as a black comedy, but Zemeckis carefully notes, “When Steven came on, it became something . . . different.” The “something . . . different” we’ve been left with is a bloated mess, so coated with layers of incoherent slapstick excess that it’s almost impossible to laugh at—all one can do is stare in awe. (During the first test screening more people were seen covering their ears than smiling). It’s hard to imagine a film less appealing than a “Comedy Spectacular” starring John Belushi, Dan Aykroyd, and John Candy devoid of honest laughs, though if it were marketed differently, it could have ducked mainstream comic expectations. Especially in the wake of the post-9/11 Bush era, 1941 seems a film that shouldn’t be funny at all. The film does end up performing the work of satire, but it channels its critique through a different set of generic parameters, managing to cough up a striking portrait of a phenomenon that really isn’t a laughing matter: homeland hysteria. The film’s creators may have intended all of this as little more than a riot, but due to an odd confluence of great ideas, considerable talent, a considerable budget, and an equally considerable lack of focus, 1941 managed to hit on something of value perhaps in spite of itself. If the film had kept viewers busy laughing, no one might have ever noticed.

Upon its 2003 DVD re-release, 1941 was sold as a nostalgic curiosity that casts a gently comedic eye on our greatest generation, yet it can easily be reread as Strangelove-ian in relevance to the post-9/11 Iraqi colonization condition. Watching 1941 now, one can’t help but notice uncomfortable echoes: The black paint dug out by Ned Beatty’s Ward Douglas to cover his windows isn’t a far cry from sticky polymer solutions put forward by our Homeland Security department as vaccines against terror; the zoot suiters don’t strike me as too far removed from hipsters planting their heads firmly in the sand and lining up to catch a post-punk revival act on the Bowery; and Major General Stillwell (Robert Stack) even institutes a color-coded warning system (only three, though) to keep the public informed/terrified. Though 1941 skimps somewhat on implicating the ways and means in which an opportunist government can abuse homeland life during wartime to its advantage, it nails a confused and conflicted populace (homebound military forces included) responding to a new threat in hugely unpredictable and increasingly outrageous ways.

Even so, it is a dubious choice to let the powers that be off the hook. Stillwell (representative of authority and a terrifically easy target) may be somewhat foolish, but he still manages to distance himself from the confusion wrought by some of his less competent subordinates. (Toshiro Mifune’s Japanese submarine commander is probably afforded more respect than anyone in the film, but this is probably due more to personal admiration for the performer than any truly revisionist bent.) A scene left on the cutting room floor would have brought the critique full circle if left in the film: after the climactic “battle” over L.A. sparked by the transformation of an Army jet into a runaway libidinal instrument, Maj. Gen. Stillwell rushes to inspect Wild Bill Kelso’s (Belushi) kill only to find Nancy Allen and Tim Matheson coitus interruptus in the cockpit (the couple’s attempts to reach true “lift-off” forms the basis of one of the only running jokes in the film that actually works). Stillwell quickly has the Rising Sun painted on the plane, just in time for the media to arrive for a staged photo-op with the supposed hero, who plants his hand right on the disguise, but never lets on that he’s realized the subterfuge. This scene reminds one of the dramatic “rescue” of Private Jessica Lynch (remember that?) from a bunch of unarmed and terrified Iraqi medical workers who had already tried to hand her over twice, only to be shot back by American forces both times. Thankfully the mission was completed without casualties, unless one counts the expensive technology the hospital had reserved for her care.

December 7 is readily referred to as the day America lost its innocence—if that is true, then perhaps September 11 will be remembered as the the day we realized that it’d been sold out from under us. 1941 suggests an even darker reality, probing how easily we will sacrifice anything (rationality, common sense, decency) in the face of fear. Closing the film with Ward’s farcical run-in with real artillery seems now a timeless warning—he’s saved the nation, but has destroyed his home in the process. Spielberg’s madcap cacophony suggests this result isn’t unusual, but merely the natural eventuality of paranoia during such conflic. It’s funny-ha-ha until one stops to reflect on how close any of us might be to reacting similarly.