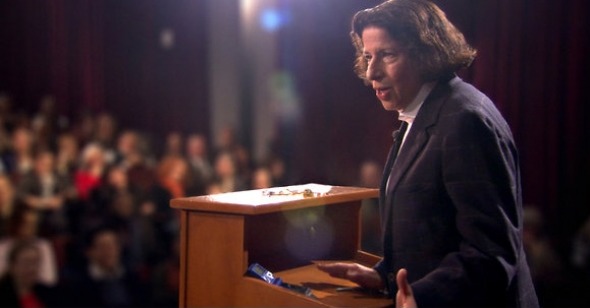 Among major American filmmakers, Martin Scorsese has the deepest and longest-running engagement with both sides of the fiction/nonfiction divide. As his career has worn on, he has actually increased his rate of documentary productions, fitting them in and amidst a series of increasingly bursting-at-the-seams narrative features. Yet, somehow, all of this activity is easily assimilated into that idea of Scorsese as restless artist—he just can’t stop filming, and films in whatever mode or register he sees fit at a given time. One couldn’t imagine Steven Spielberg popping off to make his own version of Italianamerican or Public Speaking, but that’s because there’s a crucial difference in these two filmmakers’ DNAs: one is a magician, the other is a chronicler.

Martin Scorsese had a terrific time during the production of the documentary Public Speaking, his portrait of writer and New York mainstay Fran Lebowitz. I know this not from anecdotal evidence or first-hand experience of the shoot, but from what’s on display in the film itself. Marty’s often doubled over in laughter in the corner of the frame or heard from off-screen cackling and wheezing as Fran holds court during her interview, ensconced in a mahogany Waverly Inn booth that might or might not be her regular spot (she’s not positive if it’s that booth or the one behind it). For any viewers out there still concerned with that rather tedious, always unobtainable ideal of objectivity in documentary, Scorsese’s constant stream of guffaws should be a signal of how disinterested he is in holding his subject’s feet to the fire, or in creating that kind of antiseptic space of interrogation that’s run from Errol Morris’s mid-career films to much of today’s documentary practice. The deck is so stacked in her favor that Fran, clearly recognizing a ready audience on the other side of the camera and the other side of the eventual screen, puts on quite the show.

The two longtime New Yorkers are clearly friends, of the same generation (they’re about eight years apart in age), and have lived long enough in the same city to witness it erase and rewrite its identity several times over. This fact forms the basis of much of what Fran discusses in Public Speaking. A quick shot early in the film of Marty and Fran warmly hugging (blink and you’ll miss a sound guy rushing to escape the frame and sporting that usual caught-with-pants-down expression common to such situations), suggests we’re in for a casually intimate affair. That shot also signals that Scorsese is operating in the mode of his two earliest documentaries, Italianamerican and American Boy, which is to say: loose, discursive, and with little interest in formal precision or maintaining a remove from himself and his subjects or between his subjects and his audience.

Frances Ann Lebowitz, a Jersey Girl who relocated to New York City from tony Revolutionary War–obsessed Morristown not long after being expelled from high school, shares Scorsese’s impulse to observe and record. Though, due to her well-documented, long-running “writer’s blockade,” she has only published three works to date—two best-selling comedic collections of essays about life and mores in the big city, Metropolitan Life (1978) and Social Studies (1981), and a children’s novel, Mr. Chas & Lisa Sue Meet the Pandas (1994). She drove a cab for a time after arriving in the city, but she always wanted to be a writer. Andy Warhol kickstarted her career, hiring her to write for his nascent Interview magazine, and she continues to contribute to publications like Vanity Fair (whose editor, Graydon Carter, served as a producer on Public Speaking and can also often be found in the Waverly) and accept speaking engagements, now the main platform for her to share her many, many opinions. For a time she frequented David Letterman’s show, and to folks outside of New York she’s perhaps most recognizable as the acerbic judge she played for a few years in the early aughts on Law & Order. Fran’s a certain breed of New York figure—a quick-witted raconteur with a finely honed sense of style (throughout Public Speaking she wears an impeccable blazer, white button-down with a French cuff, jeans and brown cowboy boots—word is she has her tailoring handled on Savile Row) and ready opinions on any and everything. Also typical of this type of New York celebrity, the source of her initial fame and import has long receded into the past. She’s a vanishing kind of figure, and she knows it.

Though most of Public Speaking takes place in either that velvety Waverly Inn booth or a generic lecture hall (Scorsese intercuts his main interview with two different speaking engagements), the film covers a lot of the same ground as Gangs of New York, much in the same way that Scorsese’s later New York Review of Books documentary The 50 Year Argument exists in the same headspace as The Wolf of Wall Street. Both Gangs and Public Speaking are obsessed with essences, with what makes New York New York, what makes New Yorkers New Yorkers, and how much the city has changed over time. How different things used to be, and how much they suck now.

Fran’s trained herself to be fast, provocative on this point—consider her argument for how the AIDS crisis decimated the culture, not just in New York, but nationwide, by killing off the best of the gay audience (those who “got laid the most”) for the arts. She bemoans the democratization of artistic practice she sees around her, preferring to look back on a time where an “aristocracy of talent” dominated and everyone didn’t think they could write a book; she blames teaching children to have self-esteem for this flood in literary production. She isn’t even afraid to speak the truth of that most hated word in American social discourse, elite, noting correctly that it means not rich people (“Americans love rich people”) but “smart” people.

Public Speaking is peppered with archival clips—including not only Fran in various past speaking engagements and television appearances but also James Baldwin (“I’m the only Jew in America whose first experience with an intellectual was a black man” she quips); Serge Gainsbourg, fetishizing the city while crooning “New York USA”; Warhol signing copies of Interview; and a lengthy pull from Taxi Driver of Travis Bickle’s checkered cab ominously sliding through Times Square set to Bernard Herrmann’s score. Like The 50 Year Argument, which deploys an array of similarly pitched cultural quotations to situate its main subject, Public Speaking is explicitly concerned with a certain idea of New York, one frozen in the time both Fran and Marty were formed as artists. It’s one that’s a little scuzzy and seedy, dangerous and exciting, but, most of all it’s a city in which the intellectual can use words to assist in the definition of taste, the formation of ideas, the direction of politics. In short, it’s a New York that’s more than a little romantic, and maybe never fully existed. And so what if it didn’t?

Public Speaking was clearly made quickly, but it never feels dashed off, except perhaps in some occasionally hyperactive editing between the A and B cams in the main Fran interview. (With a speaker this engaging, why would we want to look at the side of her face?). Late in the film there is a wonderfully Marty touch that brings Public Speaking into rich dialogue with the rest of his body of work. We’ve just been introduced to Fran’s car, a once checkered cab now painted eggshell (“only straights would call it white”). As she takes it for a drive, the Herrmann score from Taxi Driver creeps in again and all of a sudden we realize that Public Speaking is now emulating shots from that earlier film, set in the present day with Lebowitz substituted for Bickle. It’s a lark—I doubt Scorsese’s trying to draw too many parallels between the two, except perhaps to suggest that their best moment in New York was a shared one—but it’s a lark no other filmmaker could carry off. Who else, besides perhaps Woody Allen, has such a well-documented, love affair with the city? We don’t learn much about Fran’s personal life in Public Speaking, about her loves, her family, but we do learn much about her ideas, and, through the filmmaking, much about Marty’s as well. And in his particular brand of personal, political, historical nonfiction filmmaking it’s this stuff that counts most.