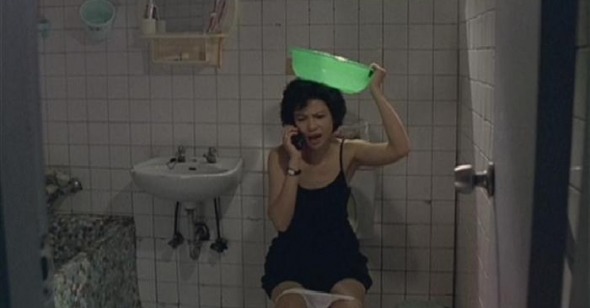 If there’s a contemporary director’s filmography that cried out more for the inclusion of a musical than Tsai Ming-liang’s, I’m not aware of it. On the surface, Tsai’s long, lonely takes might not seem ripe for population with the all-singing, all-dancing offered by genre-defining American musicals. If anything, his trademark formal strategies would seem to rigorously eschew the kind of excess in musicals that finds characters breaking the “realism” (a loaded term in the musical context), bursting out into song, dragging hordes of carefully choreographed and color-coded extras along with them into a Technicolor fantasyland. Tsai’s body of work offers little to sing about, a distinct lack of color, and he shoots Taipei as if it were a near-deserted, soaking-wet ghost town.

Wet, but not exactly Singin’ in the Rain material. With The Hole, Tsai proves that the surface tension between these two filmmaking modes is only skin deep. Think about it—why does Tsai’s camera linger so long(ingly) if not to suggest that perhaps there’s something essential missing from all of his carefully composed images? His muse Lee Kang-sheng’s blank face registers in the sea of Tsai’s compositions by not registering at all—the idea that he could be thinking anything seems almost sacrilegious within the body of The River, Vive L’Amour, or Rebels of a Neon God. Each comes across as a painful search operation for his lost (and most likely destroyed) interiority. Within these frameworks, Lee’s trademark costume (white briefs and undershirt) screams more about his character than any aspect of his controlled performances. But what are musical numbers good for if not to allow characters to express those things the narrative cannot contain? In retrospect, Tsai’s characters seem like they’ve all just been waiting for someone to strike up the band.

Part of the “2000 Seen By” series that included Abderrahmane Sissako’s Life on Earth and Hal Hartley’s The Book of Life, The Hole takes the implied apocalypse of self found in all of Tsai’s films, and jumps at the chance to make it literal. It’s raining (again) in Taipei, and a mysterious disease is spreading throughout the city. We never know exactly how it’s contracted, and symptoms are only barely sketched out on radio and TV programs that filter in and out of the film like background noise. All we know for sure is that its sufferers find their end crawling around like cockroaches before being driven insane. The new hole in Lee’s floor—left by an overzealous plumber searching for leaks—leads him to a tentative connection with Yang Kuei-mei, the woman downstairs whose apartment shares the opening. The two strangers (who are never given proper names) go about their daily business in a city that seems to be shutting down around them; talk of the water being turned off in their complex seems not to faze them at all, but there’s a certain palpable weight pressed on them by their suddenly shared environment. So many of Tsai’s characters spend their filmic lives reaching out for some kind of connection—and usually failing—that this overly obvious metaphor seems like it has the potential to derail his practiced rigor, but the spirit it’s intended to carry is one of complete artifice—that of the musical. The hole between their apartments is like the Doris Day–Rock Hudson “party-line” from Pillow Talk, reimagined for a rapidly industrializing Third World, a kind of chance intrusion into otherwise separate lives that must lead to something. In this case it’s our female protagonist breaking out into hot-flash songs of desire directed at her upstairs neighbor.

Even though the film does contain many of the aforementioned qualities often ascribed to the genre, it’s worth noting my reservations about applying the label “musical” to The Hole. An arguable point, but I think that along with the western, the musical is probably regarded as the most American of genres, and we’ve claimed a sort of cultural ownership over both that doesn’t extend into, say, film noir or science fiction. In some ways, it’s an easy to position to stake out—one genre owes its name to an American geographic specificity, and the other seems inextricably wedded to the economic production model found during the Golden Age of Hollywood. An easy position, but one that manages to enforce a certain cultural superiority that leads into false essentialist notions of the way genre works. Is a film a “musical” merely because people break out into song? If so, then of course Lars von Trier’s Dancer in the Dark fits the bill, even though I remember it more as polemical battering ram capped by Björk’s head than anything akin to what the generic label normally implies. Is a film set in the American West necessarily a western? I find it difficult to apply a label that connects John Ford’s She Wore a Yellow Ribbon to Antonia Bird’s Ravenous, though they may exist in a similar iconographic space. The concept of genre is terribly elastic—my claiming an exemption for these two titles might end up proving more about my notions of what these labels imply than anything about wider cultural assumptions. Either way, generic labels can be problematic, and perhaps never more so when left unquestioned and taken as firm categories.

The issue of genre becomes especially thorny when we enter the cinemas of the developing world (Third World, not necessarily Third Cinema). Are Western generic labels easily transposable? In the heyday of fifties Thai cinema, the industry churned out a number of cookie-cutter “westerns,” but by borrowing the tropes and leaving the geography behind, are they really that? Or are we dealing with something else? And when contemporary Thai filmmakers like Pen-ek Ratanaruang (Monrak Transistor, Last Life in the Universe) and Wisit Sasanatieng (Tears of the Black Tiger) investigate this legacy, are they probing a false Thai memory of something actually borrowed from America? And what about the Bollywood musical? If it hasn’t already, India, with its gargantuan output, should quickly eclipse the sum total of American musicals. If half of ownership is based around volume, are we heading towards a fundamental shift in how we define the genre? Recent success of Bollywood-themed musicals in the states suggests we may be on the verge of just that. Cameroon filmmaker Jean-Pierre Bekolo tackled these questions head-on in his films Quartier Mozart (1992) and Aristotle’s Plot (1996), both of which investigate the notion of genre as it relates to an African filmmaking community beyond its initial phase of political insurgency and identity formation marked by the early films of Ousmane Sembene (Black Girl, Mandabi), Djibril Diop Mambety (Touki Bouki), and Med Hondo (Soleil-O). Both of Bekolo’s films are marked by a seductive now-ness in their struggle to unlock generic categories and find room for a modern African identity in the midst of confusing waves of equally (if not more) seductive images from the West—in many ways the fundamental question for any filmmakers trying to work within their own cultures, but also access generic traditions that may not necessarily be indigenous.

As a “musical” The Hole avoids an outright political stance on this question, which is perhaps to be expected given that Tsai’s films are more Michelangelo Antonioni than Fernando Solanas—that is to say more metaphysical than revolutionary. The musical interludes here form a carefully constructed alternative narrative to what we see happening in the rest of the film—there’s no lead-up dialogue, just a cut and Tsai throws us into a different, more colorful, but no less choreographed musical world; whether it involves a camera closing in on a spot-lit Yang in an elevator (almost David Lynch) to a cute stairwell number that evokes Gene Kelly and Fred Astaire by way of Mary Lambert’s video for Madonna’s “Material Girl.” Lee figures in two of the five musical numbers (which are evenly spaced at 15 minutes apart), but in a move that continues his muted role in all of Tsai’s films, is never allowed to sing. Rather, they are all staged as expressions of the woman’s longing that refuse to fold back into the narrative.

It’s almost as if Tsai, frustrated by his characters’ own inability to communicate, opened up the hole in effort to offer them a space for exactly that: a space to communicate, but also a space to pay homage—all of the musical numbers are built around prerecorded performances of classic Chinese songstress Grace Chang, and this is where the “musical” legacy he’s invoking gets a little fuzzy. Tsai is reworking the genre through the figure of a Chinese cultural icon; yet the songs and their staging draw from traditions as diverse as Calypso, old Hollywood glamour, and Motown. In one, Lee is refigured as a Fifties heartthrob and reveals the latent James Dean resemblance I’d been missing all along. Tsai’s commanding style threatens to overwhelm and absorb these outside influences, but the audacity of these numbers in relation to the rest of the film produces a fascinating tension—between the aesthetic that’s pushed him to the forefront ranks of world cinema and a softer, more nostalgic side his earlier works have only hinted at.

But is it a musical? Well, I suppose that depends on your definition. It does feature moments in which characters sing and dance their fantasies, yet it’s unmistakably the work of Tsai Ming-liang (which means it’s like nothing else). If The Hole is to be saddled with the genre label, it will rest as an example of one that pushes the moments of song and not-song as far from each other as possible—to the point where everything threatens to fall apart. The film hangs together in how he realizes the fundamental expectations of the genre, and slams them against his unique manner of perceiving the Taiwanese cultural landscape. The rather innocuous (if apocalyptic) audio newscast under the opening credits was meant all along as a preparatory device—Tsai’s world is always constructed, but in this case all bets are off from the start.

It’s the end of the world as Tsai knows it, so why not bring back Grace Chang? She allows Tsai to funnel myriad cultural influences into a persona revered as wholly Chinese, raising in the process both the wary, lust-filled glances China and Taiwan have been casting at each other since the 1940s, and the equally ambivalent glances they’ve been casting at us across the Pacific Ocean. Though the whole weight of the film suggests Yang won’t be left feeling fine, Tsai’s final touch is worthy of a tradition of happy endings in the face of seemingly insurmountable odds. Whether you find the ending an ironic, unlikely capper or an explosion of true optimism, at least forget the labels, call it pure cinema, and be done with it. The film closes on a moment of completeness that almost manages to sweeten the bitter pill of the father-son coupling in Tsai’s The River. Almost.