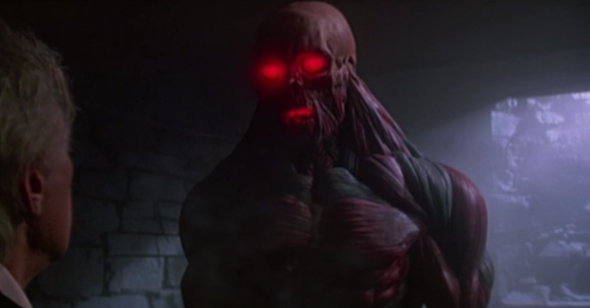 Perhaps it was just a bad dream. Perhaps writer-director Michael Mann didn’t really veer from his crime-film comfort zone after 1981’s terrific Thief (an entrancing amalgam of seventies grit and eighties gloss), only to end up in supernatural phantasmagoriaville with 1983’s much-maligned period horror film The Keep. Perhaps it would have been preferable (especially for that part of us that futilely demands life and its associated arts to move in easily classifiable straight lines) to jump directly to 1986’s Manhunter, the first cinematic swipe at Thomas Harris’s Hannibal Lecter mythos—a luridly antiseptic bit of genius that Chicago Reader reviewer Pat Graham incisively likened to “white noise” and “electronic snow.” (The critic’s memorable “am I recommending this or not?” punchline: “Just try not to nod off…”)

Appropriate, then, that The Keep begins in some tenebrous fugue state between waking and dreaming, between sound (ominous thunderclaps) and image (impenetrable fog). Caught in this foreboding mist—this white noise, scored to a pounding Tangerine Dream dirge—is a convoy of Jeeps driven by SS soldiers, chests pumped with pomp and power. “Now we are the masters of the world,” says their leader, and the story’s ostensible star, Captain Klaus Woermann (Jürgen Prochnow), after they arrive in an isolated Romanian village in the Carpathian Alps circa 1941. We believe his prideful boast; just moments before, Mann and cinematographer Alex Thomson introduce Woermann in a couple of searingly iconic extreme-close-ups (of a match struck and lifted to a cigarette; of the character’s penetrating blue eyes) that are rife with possibility and potency. In a way, Woermann himself seems to be controlling the narrative, conjuring it from his subconscious—the Romanian village only materializes after he’s, well, nodded off. Implying that the very film we’re watching is the projection of a historical bogeyman (and a charismatic, confident one at that) is a brilliant tweak of convention. We’re not waiting for the monster to jump from the shadows; it’s already in plain sight. And what could possibly be worse?

Mann is at his subversive best in these early scenes, though he soon tips his hand, whether intentionally or not (probably the latter), that The Keep will inevitably go off the rails. The first hint that the film is going to lose the laser-focus of its riding-into-town prelude comes when Woermann initially enters the village’s titular citadel: The way it’s shot, we at first think we’re on the ground peering through several towering pillars at a far-off, rocky rampart. But then Woermann walks in from below (as if emerging from the closed-off horizon line) and we realize we’re actually on a high wall looking down at a craggy walkway. In a split second, the perspective has shifted drastically, and it is profoundly unsettling.

Now imagine this Escher-like effect as the moment-by-moment norm, to the point that its power, though never entirely diminished, is noticeably dulled. That’s The Keep from hereon out—in its final, compromised form, anyway. The production was tumultuous; Mann’s rough cut is reported to have run over three hours; and the released 96-minute version (now available in widescreen and fairly good quality on Netflix Instant) was arrived at only after much studio interference. Narrative sense is completely tossed aside, though the movie still bears enough of the stretch marks of being a “story” that it cannot be entirely reconstituted and rehabilitated by those, like myself, in overall thrall to the "which way is up?" zaniness Mann has wrought.

Make no mistake: Judged by conventional standards, much of The Keep as it stands is inept, on the performance side especially. Prochnow’s evocative introduction unfortunately turns out to be a cheat. Woermann loses his prominence in the tale once a couple of greedy SS grunts unleash the film’s soul-devouring big baddie, Molasar, and then becomes little more than a scolding lackey to Gabriel Byrne’s kill-’em-with-your-stare replacement Nazi, Major Kaempffer (whose own evolution from sputtering e-e-e-vildoer to cowardly simp plays, to put it kindly, arbitrarily). As the Jewish doctor Theodore Cuza, who is shipped in from a pre-concentration camp waystation so he can delve into the history of the keep, Ian McKellen is in Fellowship of the Ring “You shall not pass!” mode, bellowing where a pause might be preferable and extending his syllables (“Look at my face-sssssssssss!!!” Cuza hisses after Molasar cures him of the debilitating disease that has left him wheelchair-bound) to a level of slice-that-motherfuckin’-ham magnitude that is truly exasperating. And Cuza’s devoted daughter Eva, played by Mann’s weakest-ever female lead, Alberta Watson, just seems deer-in-the-headlights lost amid all the posturing, though her frizzy Bride of Frankenstein ’do (between Watson and Robert Prosky’s shaggy-bearded priest there are a lot of untamed follicles) does allow for a stunningly suggestive final freeze-frame. More on that ahead.

Like David Lynch’s Dune—released almost exactly a year after Mann’s film maudit—something got lost in the transposition of The Keep from page to screen. Adapted from F. Paul Wilson’s same-titled horror novel (the first installment of an eventual six-book cycle, unread by me), there are numerous intimations of a convoluted mythology that a single movie couldn’t possibly support, from the hilariously portentous warning given to Woermann by the keep’s caretaker (“Never touch the crosses!”) to the enigmatic, often inscrutable presence of Glaeken Trismegestus (Scott Glenn), a muscle-bound, glowing-eyed immortal of some sort or other who is locked in eternal battle with Molasar…I think. Not that we can ever really know: Molasar is never named, nor his intentions clearly explicated beyond a barely audible reference by Eva near the end of the movie. And Glaeken pops in and out of the story with such ridiculous abandon (most guffaw-inducing is the character’s “to bed, woman!” seduction of Eva, which happens within seconds of meeting her) that any long-held rivalry between these supernatural antagonists barely registers.

Recapping the strikes against: nonsensical plot; acting of intensely variable quality; a compromised version of the film that Mann, with his subsequent silence, seems to have quietly disowned. I think it’s safe to say that this would be enough for most of us to label The Keep a complete failure because it fits all the standard criteria by which movies (at least those positioned to make an immediate dent in the culture-cum-marketplace) are judged. Yet it still manages to cast a mesmerizing spell, and I’m not willing to simply chalk that up to can’t-look-away-from-the-car-wreck fascination.

I think it comes back to those evocative early images of Woermann—seemingly projecting his state-of-mind before him, imagining a misty dream world that he believes he has complete control over. And then, with that first illusory interior shot of the keep, losing that power without entirely realizing it. His dream then becomes an escalating shared nightmare, one which every character in the film (and—since Mann’s canvases, however controlled, tend to sprawl beyond their borders—each viewer) must see through to an indeterminate endpoint. A Nazi-centric monster movie minus a final solution? The horror, the horror.

The narrative may devour itself, but the visuals consistently sing: Early on, there’s a slow, breathless pullback that reveals the vast interior of the keep, and the movie always has me from that point forward. It’s my down-the-rabbit-hole moment—an epic effects shot, clearly done with mattes, miniatures, and opticals, that still resonates in all the ways something so false-looking can. And there are plenty more after, from the fairy-tale image of a half-formed Molasar, sheathed in smoke, tenderly carrying an unconscious Eva, to the laser light-show smackdown between Glaeken and his arch-enemy that reveals Mann’s love of and indebtedness to German Expressionist cinema (he’s cited F.W. Murnau’s Faust as a major influence, and the canted camera angles in this climactic confrontation suggest a shakily humble apprentice trying to emulate that great silent feature’s cower-before-me face-offs between the Archangel and Mephisto).

I’ll often forgive a movie an egregious number of missteps if the final shot somehow wrangles the whole thing together—sow’s-ear-to-silk-purse in the blink of an eye. The Keep has such an ending, though it is one of several: a love-conquers-all finale, in which Glaeken becomes mortal and Eva reunites with him at the bottom of the keep, is reportedly truer to Wilson’s novel and can be viewed here; the others exist only as promotional stills. In the released version, Glaeken blasts Molasar back into the keep and is sucked in after him. Eva—her wounded, now re-crippled father at her feet—observes this from a distance, screaming after she realizes her otherworldly lover is lost. She rises to attend to her father, with the help of the townspeople, who have now been freed from the film’s many villainous influences. But she hesitates. She separates from the crowd. She turns back toward the keep—an uncertain, but expectant look on her face. Then the shot freezes.

Chills up the spine each time. There’s something so unspeakably sorrowful about this image. The fantasy is over, yes, but the real tragedy is in the implied hope—something even a featherweight performer like Watson can convey—that perhaps there’s more to come. Mann has often gifted shots like this to his female leads: to Amy Brenneman in Heat when she realizes De Niro is about to abandon her; to Gong Li in Miami Vice when the undercover cop she loves puts her on a boat to Cuba; to Marion Cotillard in Public Enemies when she is told her gangster lover’s final words. In the last of these, the shot is followed by a door slamming (probably the most pessimistic iteration of this recurrent visual trope). In The Keep, we are left hanging, caught once more in the illusory space between reverie and reality. The road to this revelatory moment is often senseless and slapdash, and despite all the outside interference, Mann must share the blame for the movie’s failures. But nor should its beauties be denied, especially in light of this great, multifaceted artist’s resplendent dreams yet to come.