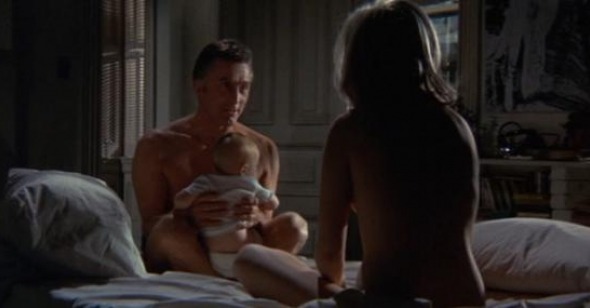 One of the challenges in talking about the “worst” film in a director’s oeuvre is that that notion is often bound less to subjective definitions of “good” and “bad” art (another, even fishier kettle of fish) than to a sense of personal defensiveness that acolytes can project simultaneously toward the filmmaker and (unconsciously?) toward themselves. Thus, a film maudit can become an irresistible dare to anybody who believes he or she can stand by anything from a beloved auteur, in the process lionizing themselves as truth-tellers allied to the misunderstood artists they’re defending. It is, to momentarily slide into personal admission, a temptation I’ve in the past seldom resisted. My own evaluative classifications of cinematic highs and lows have swung wildly over the years, starting out with stolid, rather middlebrow mainstays of quality (“Is the plot realistic? Are the characters believable?”) and swiftly giving way to the siren call of the kind of dogmatic auteurism that famously led an exasperated Dwight Macdonald to write that, to the young Cahiers du cinéma critics, “Homer nods, but apparently Hitchcock never.” Though it certainly remains director-centric, my focus has hopefully evolved enough to be able to differentiate between an instance of a neglected effort ripe for reappraisal and a perverse case of turd polishing.

Or has it? A recent viewing of Elia Kazan’s largely forgotten 1969 drama The Arrangement had me wavering between fanboyish reappraisal and head-slapping censure as it oscillated from courageous to ridiculous and back. I had chosen it for this symposium based on its negative reputation among reviewers of that period (though critical opinion has in the subsequent decades slowly begun to turn around) and on my own hazy memory of it as an aging provocateur’s trashy, misguided attempt to groove along with shifting times he never quite understood. Revisiting it, I found a different film. Neither a forgotten masterpiece nor a dartboard for easy derision, but an invigoratingly problematic work—one that could be objectively deemed Kazan’s worst (as Vincent Canby did in his New York Times piece upon the film’s release) in that it is his least wholly satisfactory picture, yet also one that finds its creator alive and fully engaged behind the camera, stumbling inquisitive even while stumbling and revealing shortcomings that illuminate his worldview as much as his strengths.

The Arrangement opens on a note of calm that, coming from a director so given to filling the screen with quarrels and brawls, couldn’t be more unsettling. Scored to the squeaks of congealed affluence (chipper radio announcers, china cups hitting tables, the mild roar of a convertible leaving its lair), the virtually dialogue-free sequence chronicles what is supposed to be a typical morning for Eddie Anderson (Kirk Douglas, gamely filling in after Marlon Brando dropped out), a wealthy, middle-aged drone in the Los Angeles advertising netherworld. Placing the protagonist and his wife, Florence (Deborah Kerr), on symmetrically opposite sides of the frame as they briskly and mechanically glide through the motions of life together (sleeping in separate beds, showering in separate bathrooms, sitting at the breakfast table while barely looking at each other), Kazan visualizes their daily routine as a well-oiled machine that, as suggested by the increasingly skittish cuts between the glossily composed shots, is nevertheless starting to stutter—a terse build-up that reaches its climax as Eddie, sandwiched between two trucks while driving on the highway, deliberately lets go of the wheel, promptly sending his car into a crash. Eddie’s gesture is plainly akin to a man throwing a wrench into his own sterile clockwork existence, a suicidal attempt that is also, in its desire for losing control, a paradoxical, defiant grab for life.

Kazan doesn’t exactly bury these themes underneath the film’s skin. Though there are flashes of breathtaking subtlety throughout his career (think of the tender eroticism between Montgomery Clift and Lee Remick in Wild River), the director always had a penchant for the emphatic-shading-into-strident effect, for the immediate sensation from what he called “forthright images.” (“Forthright the way a butcher is forthright when he slaps down a steak for inspection,” to again quote Macdonald.) Recovering from his accident mostly by silently padding around his mansion in his pajamas, Eddie is visited by a trio of dark-suited colleagues from the ad agency and, as they ooze with condescending well-wishes and queries about delayed assignments, the film cuts to a TV screen showing jackals tearing into a gazelle’s carcass. Later on, he imagines his mistress Gwen (Faye Dunaway) idealized like Botticelli’s Venus emerging from his swimming pool. Later still, as Eddie’s menopausal crying jag spirals into full-on mania, his visions of his split self—the sensitive artist he could have been versus the Snidely Whiplash sellout he became—are literalized in legitimately tacky fantasy sequences (a roomful of cigar-puffing executives gawking as the protagonist leisurely flies before the office in a small airplane, Batman-esque “Zoink!” exclamations plastered all over a fight sequence) that suggest Frank Tashlin with the humor leeched out.

Such flights of fancy proliferate as the main character delves deeper into a maelstrom of family, lovers, friends, and enemies, and, galling as they can be, these fantasies shed light into one of Kazan’s limitations. So tangibly adept at capturing the sweat on Brando’s chest or the weight on James Dean’s shoulders (“the organic, the biologic, and the corporeal,” wrote Jacques Rivette in a Cahiers thumbnail paragraph on Kazan), he seems here helpless when it comes to depicting a state of mind. Torn between domestic obligations and dreams of escape, choked with loathing for his gilded cages and loaded with Freudian baggage from an Old World miser of a father (Richard Boone, blustery and unconvincing), Eddie “goes away into himself” in startlingly jejune ways, with Kazan scrambling pell-mell through a fog of stylistic tics—freeze-frames and sped-up footage, tinted clips and refried-Resnais flashbacks and flash-forwards—in an attempt to portray a psyche in crisis. And yet, for all its faddish noise and flash, The Arrangement remains vivid due in no small part to Kazan’s legendary rapport with actors. In sharp contrast to the stylistic obfuscation found in much of the picture’s later sections, one finds a sense of emotional nakedness to the performances that’s very different from the Method flamboyance of the acting in, say, A Streetcar Named Desire or A Face in the Crowd. There’s a bedroom scene between Douglas and Kerr midway through that, passing through various shades of anger, hope, and shame, stands as a remarkable example of Kazan’s ability to push performers beyond their respective safety zones.

Whether relating to Terry Malloy’s tormented decision to inform on others in On the Waterfront or to the struggle of immigrant outsiders in America, America, Kazan always established a personal connection to the material. Here, it’s the fear of self-betrayal that gives The Arrangement its anguished, autobiographical tension, the dread of compromising and prostituting talents and emotions that’s explicitly voiced in the ham-handed but undeniably piercing moment when Gwen verbally twists the knife already lodged into Eddie’s conscience (“What happened to you? It must kill you to think what you might have been”). In that sense, one imagines that to Kazan the same intense and unquestioning commitment to the source material (his own best-selling novel) that often makes this film so maddening would be far preferable to the neutered, producer-approved tastefulness that plagued such early success d’estime hits as Gentleman’s Agreement or Pinky. In the end, the characters’ soul-baring feels particularly attuned to a period of self-investigation when a filmmaker and a nation could entertain the fantasy of yelling “bullshit!” at the office and hurling their material belongings into the proverbial pyre. There may be enough flaws to qualify it as Kazan’s “worst” film, yet no work with enough passion to risk being ludicrous (and possibly anticipate the most intrepid, confessional moments of John Cassavetes and Abel Ferrara) should be easily dismissed.