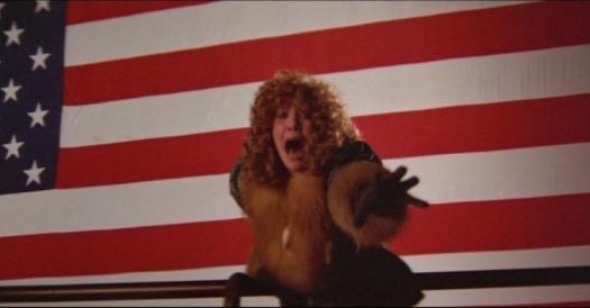 Sound and Fury
Michael Koresky on Blow Out

Like John Travolta's Jack Terry, I remain, long after Blow Out’s closing credits, haunted by a scream—so piercing, palpable, so full of anguish. “Now that’s a scream!” exclaims a delighted sound technician in one of the film’s final lines. Indeed. Not only does Nancy Allen’s climactic cry, emitted as she reaches out to her potential savior, put to shame all of the other scream tests enacted by a succession of stalker-flick bimbos throughout the film (its central running gag), it also effectively erases not only the film's tenuous conspiracy-thriller narrative but also the memory of all other movie screams. Anyone who denies De Palma’s humanity, or sense of tragedy, has a lot of explaining to do in the agonized face of Blow Out (1981), which manages to be at once the director’s most melancholy, gripping, and empathic work, a monumentally humane and grim film, perched ever so slightly on the edge of sadism. The scream is thus recorded, within and without the movie, played back, fraught with horrible memories; it’s the scream of all damsels in distress, the scream of every De Palma heroine, and most importantly, in the film’s world, it’s “real.”

Much easier than accepting the plangent wail of Blow Out is to dilute its power by either pushing it back down into its “cheap thriller” genre hole or to call out its clear cinematic precedents. Both of which, critically, bring you to about zero: Blow Out might be “just a thriller,” but, like its immediate predecessor in the De Palma oeuvre, Dressed to Kill, it attains a grandeur rarely seen outside of “respectable” art. Additionally, name-checking its two forebears, Antonioni’s Blow-Up and Coppola’s The Conversation, only connects Blow Out to film history in a cursory manner. Besides the title, the kinship to Antonioni’s 1966 mod anti-thriller is nebulous; despite their similar interrogations of form (Antonioni of the still image, De Palma of sound disconnected from image) by way of murder mystery, the former feels by comparison an encased objet d’art, disinterested in flesh and blood. Perhaps the comparison to The Conversation bears more fruit, but mainly in their divergences. Coppola’s film, similarly tightly wound, lean, and predicated on the subtleties and limitations of recorded sound, comes wrapped in higher-art trappings. It’s ensconced in ominous tranquility, its gentle piano tinkle indicates malaise. The Conversation is all interior, its protagonist ends up an imploded shell. Blow Out, conversely, is a primal scream.

De Palma’s film begins with a trick as virtuoso as Coppola’s opening single surveillance zoom into that crowded San Francisco park. Yet in the place of that acclaimed, unintrusive beginning, De Palma thrusts us into bargain-basement cheapo horror, complete with bra-and-pantied girls gone wild and masturbating sorority cutie pies being stalked by an unseen, subjective-camera menace. Of course, De Palma takes us into the communal shower, pulls back the curtain, and, with the butcher knife in foreground, delivers the film’s first shock: the girl’s hilariously inept, warbling cry for help. Quickly, he cuts to Travolta’s sound effects man, Jack Terry, smoking in his dingy Philadelphia studio, giggling at the shameful yelp he has to work with. He is then given his assignment, which will, unbeknownst to the audience, shape the entire narrative: find a suitable scream.

From this point on, Blow Out (largely drained of those contemplative moments of solitude that shaped The Conversation) continues to make sound all-encompassing— it’s as if your senses are heightened from one scene to the next. That the film does function as a thoroughly involving crackerjack thriller is a testament to De Palma’s diversionary skills, as both an entertainer and an investigator into the very mechanics of his craft: The Conversation feels high-concept every step of the way, while Blow Out is primo pulp that only gradually reveals the profoundly sad and cynical tangle beneath its roller-coaster tracks. Yet if you listen closely, you can hear it from the beginning: Over the opening credits, we see an audio gauge swaying back and forth, monitoring everything from a pulsating heartbeat to rushing wind to the sound of tape rewinding with a high-pitched squeal, until finally there it is—Sally’s scream.

The sounds of women screaming open the film with a laugh, yet close the film with unimaginable despair. In between, the warmth De Palma shows to his two lead characters makes the cold detachment of the film’s final move into utter amorality all the more unnerving. Jack Terry, an idealistic man caught up in a world of trash, of scum, and of disappointment, tries to be upstanding, to do the right thing, both for “his country” and the woman he knows he is falling in love with. One night he’s taping natural sounds of trees rustling and frogs croaking (captured in astonishing visual as well as aural textures with De Palma’s never-better-used split diopter lenses, which connects his recording device to those objects he’s putting on tape), when he hears a tire suddenly blow out, and a car plunges off a bridge into a lake. He fishes out Sally and takes her to the hospital, only to discover she was the illicit passenger-seat guest of a senator (and presidential hopeful) who has drowned in the crash. Meanwhile, De Palma finds a rather nifty way of segueing into unexpected slasher territory, casting a never creepier (even in Raising Cain) John Lithgow as a slithery hit-man-cum-political-hired-hand responsible for shooting out the senator’s tire . . . and who must now do away with Sally, while also enacting a series of serial killings to make it look like just one of many local murders.

Like the paranoia films of the mid-1970s (Night Moves, The Three Days of the Condor, The Parallax View) but with more Reagan-era disillusionment and defeat than political immediacy or race-against-time hope, Blow Out simply plays with the basic conventions of the political thriller as a means to further shred nerves. Blow Out is about a possible assassination cover-up, but it’s unlikely that anyone first remembers its main plot thrust. Blow Out invokes Chappaquiddick, is replete with wire-tapping evocations of the Nixonian Seventies, and, in its final moments, is literally drenched in red and blue gels, with grotesquely imposing American flags literally taking up the entire screen—yet the patriotic configuration the film most resembles are those bloody stab wounds in the shape of the liberty bell that Lithgow’s “fixer” leaves on his victims. Its Philadelphia setting pointedly evokes a dubious celebration of national history, but De Palma doesn't let the whole thing to devolve into “absolute power corrupts absolutely” schematics. Blow Out is about grim little people navigating a grim little Philadelphia, infested with neon and sleaze; the bicentennial is not just incidental but infinitesimal in the face of individual suffering.

Though Jack has asserted himself once as Sally’s savior, it’s his inability to do so later that provides Blow Out with its tragic dimension. And in the interim, we’ve grown accustomed to her face: Nancy Allen’s never been sweeter than in Blow Out, and the audio recording of her final moments is as memorable for her Philadelphia-girl gum-snapping earnestness as for her pleadings for mercy (we remember the way she pronounces “Sugah-babies,” as much as anything else). But her glow can’t be sustained: ultimately Blow Out is so much more than an expression of individual impotence—it’s a filmmaker’s admittance of his own culpability in an exploitative genre and industry. Dressed to Kill ended with a horrified shriek, as Nancy Allen’s haunted prostitute Liz wakes up from her final nightmare, gripping her throat where she dreamed she’d been slashed. The unrepentantly grim provocations of Dressed to Kill, which incited accusations of misogyny from understandably outraged factions who didn’t appreciate the nearly erotic hyper-stylization of the razor-slashed deaths of philandering housewives and loose hookers, lead straight to Blow Out’s opening joke, but also to its grim conclusion. By connecting his own aesthetic to exploitation films, De Palma asks what exploitation really means. By Blow Out’s end, it’s not just woman-as-victim, but an actual woman’s death that makes its way onto the soundtrack of just another cruddy B-picture.

The closing images and sounds of Blow Out are horrible and definitive, and, with due respect to Antonioni, much more terrifying than the existential what-if miming that closes Blow-Up. De Palma wants to penetrate and shatter; with perhaps the exception of Carrie and Casualties of War, never have De Palma’s characters felt so vivid, dynamic, and therefore, cruelly snuffed out. Following Blow Out,, De Palma moved into the excess pageantry of Scarface and the miserable meta-effects of Body Double, perhaps the end point in the erotic thriller, a film in which the very sight of a naked woman seems to give off the stench of rotten flesh. Blow Out now seems like penance for all of De Palma’s past and future cinematic crimes, as well as ours as viewers. I can think of no greater expression of the force of movie watching than Travolta sitting alone in a dark room in Blow Out’s final shot, covering his ears from the horror he has witnessed, recorded, and fed back to the world. A victim and perpetrator of his own crimes, he still can’t stop watching. And listening.