Best of the Decade #12: Kings and Queen 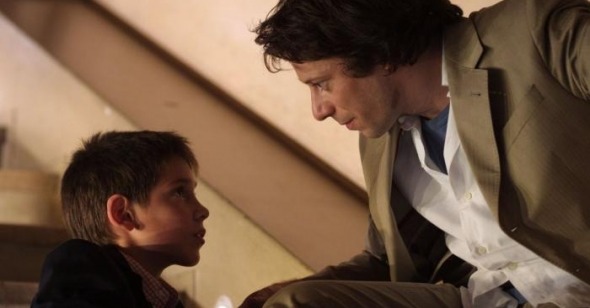 The Art of the Matter
Elbert Ventura on Kings and Queen

There has been talk this past year of the dour mood in cinema. The Cannes and New York film festivals, the polestars of American art-house culture, excited some and repelled many with their lineups of “gruesome,” “pessimistic,” and “bleak” provocations. Elitist, that dreaded word, was paraded out and slapped on both festivals, which were accused of being interested only in shoving veggies or dirt into the mouths of moviegoers. But such complaints are nothing new. Movies have always been a mass medium—and artists have long sought to expand the bounds of that definition. That tension between popular entertainment and high ambition is at the heart of a long-running argument about the direction of the movies.

French filmmaker Arnaud Desplechin doesn't so much pick a side as ignore the dispute. At decade's end, he has emerged as one of the festival circuit's most adored names. His is a peculiar project. Though a maker of dense, allusive, eclectic, and formally radical films, Desplechin hardly thinks of himself as an inaccessible artist. As he has said in interviews, Desplechin has located his aesthetic firmly in the democratic tradition. “I think that’s what I love about popular arts—they belong to everyone,” he told Jeff Reichert in these pages. In the same interview, he said of making movies, “It’s always for an audience, and you need to take care of that audience and respect them. Because it is for them you’re making the movie.” Compare that with Lars Von Trier's statement at Cannes this year: “I don't think about the audience when I make a film. I don't care. I make films for myself.” The disparity between those outlooks underscores Desplechin's value: here's an auteur who wants to explore the medium's possibilities—and who wants to take us with him.

Of his contributions this decade, none represents Desplechin's virtues better than 2005's Kings and Queen. Where to begin with it? Well, one doesn't “begin” with Kings and Queen. Much praise has already been lavished on Desplechin's masterpiece. Repeat viewings have only confirmed its inexhaustibility. Relentlessly surprising, Kings and Queen was (now famously) made with Truffaut's dictum “Every minute, four ideas” as its animating principle. (That line was used as the title of a 2008 Desplechin retrospective at the IFC Center.)

The movie's queen is Nora (Emmanuelle Devos, in one of the decade's great performances), a single mother juggling the kings in her life: her ten-year-old son, her dying father, a departed first love, a stolid fiancé, and a manic ex. That last one, Ismael, played by Mathieu Amalric, is the movie's other protagonist, the madcap counterpart to Nora's melodramatic diva. Eschewing glib exposition, Desplechin constructs a mercurial, even cubist, character study spilling over with blissed-out experimentalism. Elegant dissolves bump up against discordant cuts; hip-hop crashes into classical music; flashbacks fuse with dreams. Desplechin and his editor, Laurence Briaud, reduce the action to shards, breaking up images and scenes with different takes. That prismatic perspective bespeaks an impulse to embrace life unreservedly and from all angles.

Kings and Queen shares another affinity with the work of Truffaut (particularly Jules and Jim)— an all-encompassing love of art. Nora is an art dealer, her father a writer, Ismael a musician. The movie suggests that a life immersed in art comes with madness, sorrow, exhilaration—that is, life at its fullest and grandest. Scattered throughout are quotes from poems, books, movies; allusions to classical mythology and fairy tales abound. In the hands of someone like Kubrick, the references to antiquity can be reproachful, a rebuke to modernity and a jab at our smallness. But Desplechin doesn't view his characters from Olympian heights—he's right there with them. In his movies, legend and lore serve as reminders of how timeless our earthly striving is, and how dappled with grandness our lives are.

Kings and Queen is the work of a filmmaker of formidable intellectual dexterity. Cerebral though it may be, the film is suffused with enchantment. The first title card comes with a flourish of strings—a dash of pixie dust to start the proceedings. Magic is sprinkled throughout this movie, largely set in pedestrian spaces. Ghosts haunt its halls; superstition intrudes on logic. When the inexplicable occurs—as when Nora receives a burn mark from an angry letter pressed against her skin—it hardly feels out of place. And yet there's an almost mathematical rationality here as well. A cracked fusion of the romantic and the real, drama and farce, Desplechin's movie devotes exactly 67 minutes each to Nora and Ismael, and a lovely, haunting 12-minute coda that the director calls a “gift” to Nora's child. Formalist and yet freewheeling, the movie contains multitudes.

A joy second only to watching his movies is listening to Desplechin talk movies. In interviews, the French auteur bursts with ebullience and erudition, radiating an infectious magnanimity and open-mindedness. He doesn't so much discuss films as gush about them. Like Scorsese with a slower motor and a French lilt, Desplechin the critic is a director that cinephiles are suckers for—the film artist as movie buff. (See also: Quentin Tarantino.) At a screening for A Christmas Tale in Silver Spring, Maryland, last November, Desplechin stayed for a chat after the movie. The large theater was just over half-full at best for the Q&A, but Desplechin, who has seen much larger festival audiences, didn't seem troubled, holding forth with good cheer. One got the impression that he'd have been just as happy to ramble on had the theater contained a mere handful.

His exuberance is contagious—and emboldening. For the movie buff who despairs of the art's relegation to the margins of culture, Desplechin's palpable excitement about film is an invigorating tonic. In 2009, cinephilia seems more than ever the province of cultists. Desplechin's dreams of a truly popular art take on a poignant cast, because its realization seems so distant. “This is a film that definitely belongs to the audience,” Desplechin said of Kings and Queen. He's right, of course—to these eyes, it's an accessible, pop-infused movie that should be loved by moviegoers. A word that comes up frequently when discussing Desplechin is “generous.” Not for him the astringent, exacting, and forbidding cinema of some of his festival peers. And yet as Nick Pinkerton once wrote here, “Desplechin can prompt walk-outs that only Lars von Trier can dream of.” (My own buzzkill after a June 2005 viewing in Chevy Chase, Maryland: two matrons muttering about how nonsensical and unlikable the movie was as the sparse crowd filed out.)

Forget mass audiences: even educated cosmopolitans, the very viewers whom artists like Desplechin need to survive, seem increasingly incapable of responding to movies that test formal and narrative conventions. They seem less intrigued by movies as an art, even as they continue to go to museums, read challenging novels, and see interesting plays. There's also the notion, rapidly gaining steam, that TV has lapped movies as a greater artistic medium—an idea that, based on my interactions, is particularly popular among those who don't actually go to movies much these days (and, when they do, rarely like to be surprised). The current climate for film geeks recalls the girlfriend's rebuke of Woody Allen's character (a film critic!) in Play It Again, Sam. Nancy (Susan Anspach), breaking up with him, complains that all they do is watch movies. “You like movies because you're one of life's great watchers. I'm not like that.” It's an attitude that implies that movies should be received passively—that art is separate, ancillary, even unnecessary to life.

Desplechin knows that the dichotomy is false, which is why he has won the devotion of many hardcore cinephiles. His movies and his outlook redeem our passion. They say what many of us feel to be true: that love of movies and love of life are one and the same.