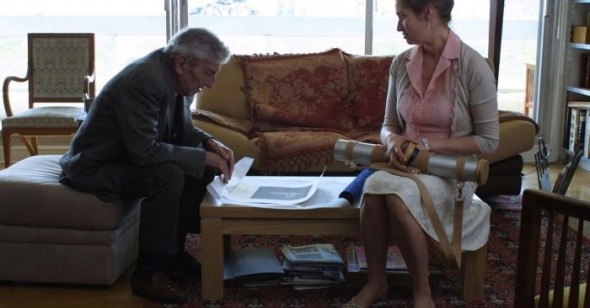 Stranger than Fiction
Nick Pinkerton on Kings and Queen

Kings and Queen was one long, effervescent gush of cinema in a year when the medium dearly needed a shot of spirit; maybe that‚Äôs enough to account for the general outpouring of critical goodwill that greeted its arrival onscreen (the movie boasts a not-unimpressive 84/100 on metacritic, as of this writing). In an era grown accustomed to starchy, parsimonious Euro-art-house imports (ahem‚ÄĒCach√©), here was a movie that gave so much: so much trowled-on story and backstory, flashbacks book-ended in dreams, parenthetical pans, 40-frame allusions, flurried edits, an excrescence of detailed little parts, with postmortem and mortal, past and present all tumbling over and atop one another. And Desplechin‚Äôs films, like his characters, just have a way of seeming happy‚ÄĒwhile not at all pleased with themselves‚ÄĒthat attracts the effortless affection in those of us who admire his still-very young oeuvre.

That bigness has tended to make writers throw up their hands: whittling the diffuse Kings and Queen down to its point is a bit like sniping with a blunderbuss, and so we‚Äôre forced to interact with the movie as an experience rather than as an illustrated idea. The stock observation goes that the film‚Äôs messiness reflects life itself‚ÄĒbut it‚Äôs interesting to note that I‚Äôve never heard any lovers of this movie go on about how much they completely identify with Emmanuelle Devos‚Äôs Nora, or how they totally know Mathieu Amalric‚Äôs Isma√ęl; in short, for all the movie‚Äôs skin-deep realism, I‚Äôve never noticed anyone mistaking it for life. Desplechin himself has suggested an explanation for this; in an interview for this very journal, he offered a charming definition of movie drama that encapsulates his admixture of discreet enchantment and realism: these are ‚Äúfairy tales that could have happened in the real world.‚ÄĚ

The movie‚Äôs locations‚ÄĒeggshell-colored hospitals, gas stations, and apartments in gray mid-sized provencial towns like Roubaix and Grenoble‚ÄĒnever feel scouted for picturesque heft, but rather incidental, as though scenes just dropped there, an appearance of haphazardness helped by the deceptively workmanlike camera of Desplechin‚Äôs from-day-one cinematographer, Eric Gautier. Kings and Queen‚Äôs fable-like lights and darks come from somewhere else, then: the tinges of incest, poison-pen letters with the power to burn flesh (which burn up with a twinkling sound), swoony strings, and shopkeeper parents who can quote Apollinaire. Or from an interior place: Desplechin stays intent on scrutinizing the obscure logic of muddled human emotions, measured in their moment-to-moment shifts; I suspect he‚Äôs taken a lesson in the rewards of watching faces, patiently, from filmmaker Philippe Garrel, who‚Äôs taught at the director‚Äôs alma mater, FEMIS, and whose father, Louis, appears as the heroine‚Äôs father in Kings and Queen.

Inasmuch as Kings and Queen has a subject, that subject is its kings, queen, and their courtiers; Arnaud, to drag out an old saw, ‚Äúloves his actors‚ÄĚ‚ÄĒand as is usually the case, that love comes alongside a lot of indulgence. But to suggest that he just lets loose his players, as in one of those facile truth-seeking exercises where everyone acts themselves hoarse in the name of revelation, would be a grave disservice to this film. Desplechin and dab-handed editor Laurence Briaud couldn‚Äôt care less about unobtrusive verisimilitude, reshuffling scenes into a dense prism of set-ups, catching a whole network of enigmatic grins betraying secrets and complicities. Miles of celluloid must‚Äôve been spilled in the name of cutting room flexibility‚ÄĒit‚Äôs possible that there was more on-set method to this movie‚Äôs madness, but I kind of doubt it‚ÄĒbut it pays in dividends; I can‚Äôt remember the last movie that‚Äôs allowed so many actors to be so good. Garrel is a thing of desolate beauty with his rusted-through voice; Emanuelle Devos brings suitably regal bearing to her titular role, with her big, slightly clownish mouth providing the right amount of ridiculous pathos; Joachim Salinger, with his feverish hobgoblin eyes, is memorable as the ghost of a tweaked-out young poet; and Mathieu Amalric, compact and effusive, wins (deserved) praise for basically doing the same feckless schtick he pulls in goofy French multiplex fare like Un homme, un vrai.

I‚Äôd be remiss not to mention that Kings and Queen, one of my favorite movies of 2005, contains a couple of my less favorite movie moments from that same year. In one interlude, Isma√ęl performs a cloyingly cutesy-quirky breakdance solo for his group therapy audience, a little digression that crops off awkwardly from the narrative to digress into ingratiating shuck-and-jive‚ÄĒfor just a moment, Amalric‚Äôs bedhead seems calculatedly salon-tousled. Or there‚Äôs the Real World‚Äďstyle direct-address interview that introduces Devos‚Äôs Nora, which feels like an awkward editorial afterthought‚Ä¶ I could go on, but why? That same out-of-nowhere individuation informs the film‚Äôs best moments, like the rancid letter from deceased father to daughter that poisons the film‚Äôs flow‚ÄĒit‚Äôs a movie manically searching for new recombinations of friction (not least the counterbalance of screwball and melodrama, shitty hip-hop and adult-contemporary soundtracks, phony suicide attempts and real death, l‚Äôamour fou and l‚Äėamour logical in the Isma√ęl/ Nora scenes), not content to let any scene trudge by with the leaden step of the obligatory. So who can begrudge it for shitting the proverbial bed here and there?

Desplechin (who looks just a bit like the wily PiL-era John Lydon) is a fairly voluminous talker, as proved in Wellspring‚Äôs DVD release of Kings and Queen, which features him doing a sit-down interview with his most lucid admirer, the critic Kent Jones. The director has plenty of ideas as to what his movie‚Äôs about, an entire mythology on male-female relationships as defined by the cinema, plenty of cryptic ideas on murder, loss, and love‚ÄĒbut one doesn‚Äôt get the impression that he‚Äôs particularly eager to impress them on anyone else. Relinquishing his priority of interpretation to an audience isn‚Äôt just a generous, but a gently revolutionary gesture‚ÄĒand that‚Äôs how I finally think of Kings and Queen. It‚Äôs easy to forget, in its moments of brisk daffiness, just how radical‚ÄĒin two-movies-in-one form and in content‚ÄĒthis movie is; believe it or no, Desplechin can prompt walk-outs that Lars Von Trier could only dream of. That‚Äôs because, too restless to stay put in the safe confines of the Art ghetto, Desplechin is suggesting the way to a popular cinema of denser, deeper feeling.