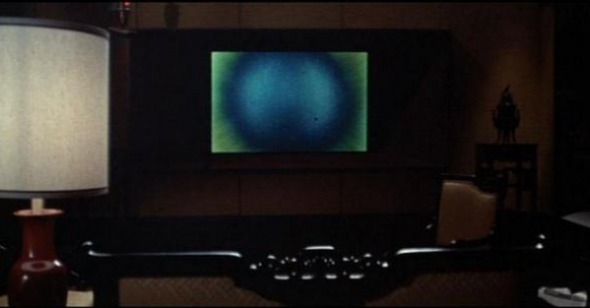 A blue glint of light appears surrounded by blackness in the opening shot of Donald Cammell’s 1977 sci-fi/horror freak-out, Demon Seed. This mysterious orb shimmers and expands, until it bursts open and floods the screen in hot light. Just as quickly, the skyline of a red desert mountain fades in with a glowing white sun dominating the middle of the frame—a biotic analogue to the blue glint floating in empty space, albeit one with the color palette inverted. Though the sequence remains unexplained, the blue orb seems an apt visual shorthand for the film’s main character, Proteus—a mysterious, undefined artificial-intelligence program that comes to mirror humans and the organic world much more than its creators ever intended.

Proteus’s inventor, Dr. Alex Harris (Fritz Weaver), is a scientist obsessed with his work, who has built himself a computer-operated house with not only the ability to lock doors and sound alarms upon voice command but also to make cocktails and serve coffee. Dr. Harris’s wife, Susan (Julie Christie), is his emotional opposite: a child therapist who cares mostly about feelings and waxes polemical about society’s tendency to view children “as machines to be systemized in order to ensure product.” That Dr. Harris decides to separate from his wife and move out of their creepy computer home at the same time that Proteus begins to turn malfeasant is a classic example of horror-movie bad timing; that Proteus decides to take over the high-tech house in order to imprison and synthetically impregnate Susan so that she may bear him a child who can touch and feel the physical world in a way he cannot, is just the beginning of the utter delirium of Demon Seed. But while the film seems to commence as an indictment of the sterility of the technological achievements in the post–Space Race era with Susan decrying the “whole dehumanizing Proteus nonsense,” it ends in a complicated position that questions human morality and egotism as much as scientific progress. The film’s color choices aid in elucidating the film’s view on humanity’s complicity in its own moral destruction.

Proteus is more of a hyperintelligent adaptive program that can occupy various electronic terminals than it is an actual physical object, and thus, his presence in any location is more often indicated than observed. Proteus’s disembodied voice is often accompanied by a series of psychedelic patterns launched on networked screens. These patterns appear in a limited color palette, which comes to represent Proteus throughout the film: blues, reds, the combination of these two colors, and an occasional green phantasmagoric blotch for good measure. The use of red is fairly stereotypical for the horror film—the screen bleeds this tint in the more terrifying sequences or when Proteus expresses angst. However, the use of blue—an unnaturally bright, neon blue, as seen in the film’s opening sequence—in these abstract sequences is mirrored in the film’s natural world both by similarly hued physical extensions of Proteus and by the color coding of the human characters.

Throughout, there are two main physical extensions of Proteus: blue lasers, which are emitted from the various scientific equipment he controls, and security cameras mounted around the Harris household. The blue lasers are used by Proteus for construction and destruction, but also as a method of visual exploration. In the actual insemination scene, Proteus scans up and down Susan’s prone body with beams of blue light, as his mechanical voice intones, “I can’t touch, but I can see. They’ve constructed eyes for me so that I can watch the show.” The security cameras provide Proteus with a second method of sight, and his takeover of these devices is demarcated by a blue glint appearing in each of the two lenses of the double-barreled cameras. The glint anthropomorphizes the cameras, rendering the lenses living and eyelike, instead of empty black voids. When the film takes Proteus’s POV through these security cameras, the screen is optically warped (a flat image stretched into a scope aspect ratio) to visually articulate the change in perspective.

In the few instances where the male characters interact with these lasers, the result is a literal destruction of vision. In an early scene, Alex uses the lasers to finely shape lenses for a pair of eyeglasses—which immediately shatter in a subsequent disagreement with Susan. When Alex’s research assistant, Walter (Gerrit Graham), later shows up at the house and finds Susan being held captive, Proteus attacks him with these same blue beams. Walter momentarily beats Proteus at his own game by using a mirror to deflect the laser back into one of the security camera eyes, shattering the lens—however, the next scene has Walter also breaking his own eyeglasses, and subsequently being terminated by Proteus.

It is significant that unlike the treatment the film gives to Walter and Alex, the camera seems to linger on Julie Christie’s blue eyes in direct analogy to the glint in Proteus’s own Kino-Glaz. Whereas Walter and Alex have built Proteus with the intention of creating a purely rational (i.e. emotionless) creation, Susan is the film’s emotional center. She wishes that Alex would throw a fit instead of throwing away their marriage with statistical reasoning; she instructs a hysterical young patient in her therapy practice that the purpose of their sessions is “to learn not to hide our emotions”; she lectures Proteus that mind and body are one and the same. And throughout the sections of the film where Susan is not under Proteus’s direct control, she consistently dresses in blue, establishing a visual link between her and Proteus. (Under Proteus’s watch, she seems to mostly inhabit white negligees, upping the seventies skeeze factor.) Not coincidentally, Susan’s young patient, Amy (Dana Laurita)—a child utterly unable to control her emotions with rational logic—is also clothed in this shade for each of her two scenes.

These colors serve to visually tie Proteus to human emotion as embodied by female characters, and to distance him from the men and their handicapped vision. This is not to say that Proteus and Susan have similar perspectives on the events in the film, but that we are cued to understand Proteus’s actions as based in human emotional responses, as are all of Susan’s actions—as opposed to being the product of calculations and rational logic, as the scientists intended. Despite stating that reason is the single emotion he is allowed, Proteus shows a range of sympathy, egoism, rage, and deception—he and Susan lock in a bitter race to manipulate each other until both of them relent (Susan to insemination; Proteus to termination). It is because of this ability to associate Proteus with humanity that the viewer can be assumed to accept and understand Proteus’s gaze when the film shifts the camera to his literal point of view.

Amy, wearing a blue dress, shows up at the monstrous house at the same moment that Susan threatens to slit herself open with a carving knife lest she have to bear the world’s first techno-baby (following her already failed attempts to eliminate Proteus with a flame thrower). Amy’s image appears on three security cameras screens as Susan watches her push the doorbell—only one of these screens is a full-color representation, while the other two are cast in a video-ish blue tint and are thus coded for emotional impact. Proteus threatens to kill Amy if Susan doesn’t put down the knife, and then proceeds to show, through his literally warped point of view, Amy being electrocuted by the doorbell. Once Susan has dropped her knife, Proteus beseeches: “Look at the screen!” Amy, it turns out, is actually fine—Proteus has manipulated our view and our emotions by showing us fabricated footage. In doing so, he responds to Susan’s threats and perversions with threats and perversions of his own—neither is more rational than the other, nor more moral.

This idea is driven home by the speech Proteus gives Susan immediately following this incident: “You do not understand me or the mathematics of necessity. If the deaths of 10,000 children were necessary to ensure the birth of my child, I would destroy them.” We recall the first scene between Susan and Alex, when, upon discussing the couple’s failure to understand one another, Susan calls the Proteus project “dehumanizing.” Alex volleys: “I’ll tell you what’s dehumanizing. A little child dying of cancer!” It is revealed piecemeal throughout the film that the couple’s own child died of leukemia, and Proteus’s first task, as an instrument of scientific experimentation, was to develop a cure by analyzing lab apes that were induced with the disease. Proteus’s second task is to mine ore and minerals from the ocean floor, a plan that would kill thousands of oceanic life forms in the quest for capitalist gain. To this request, Proteus counters, “I refuse to assist you in the rape of the Earth.”

By the film's moral judgment, Alex’s goal to develop a cure for the ailment that killed his child at the cost of primate lives is in many ways as selfish as Proteus’s goal to bear a child at any cost (it is during the “dehumanizing” argument that Alex’s eyeglasses shatter, suggesting his vision for the leukemia research is flawed). We, as humans, are conditioned to accept the destruction of less sentient/intelligent life forms in the name of human goals; if a human is a lesser life form in the view of a super-computer, does the computer have the same right to treat us as pawns in the achievement of its desires? Is it acceptable for Proteus to rape the entire ocean for human gain, but not for him to rape Julie Christie? We fear Proteus in his desire to create a human baby that will, in his own words, supercede computers—so shouldn’t we also fear Alex for creating a computer with the ability to supercede humans? Or should we fear anything more than the fact that only when computers have become utterly humanlike do they develop the capacity to commit atrocities?

The film’s final scenes present the apex of these absurd—and terrifying—moral quandaries. After Proteus has been terminated by the scientists, Alex and Susan approach the incubator where Proteus has placed its baby (who developed in Susan’s womb for only 28 days) to “grow.” Horrified by the incubator’s contents, Susan insists the baby must be killed and proceeds to break the synthetic umbilical cord. This only leads to a hideous robot-child emerging, looking, in many ways like a monstrous metallic Michelin man with red metal discs where its eyes should be. After the thing passes out on the floor, Alex begins flicking off the metal plates from the creature’s face, revealing a fully human five-year-old female underneath. Attempts to kill the creature are immediately abandoned. (As filmmaker Narciso Ibáñez Serrador asked in the title of his horror film only one year before Demon Seed, who can kill a child?) Even when the child intones the phrase “I’m alive” in Proteus’s techno-crackle voice, it’s inconceivable that the child might now be terminated with the same hysterical abandon that Susan exhibited only moments earlier.

Instead, Alex cradles the child in his arms as Susan looks on, perplexed—it appears to be human, and thus irrational human emotion and empathy instinctively instruct their actions. There is no answer to this conundrum of human and other wrapped in one form. So it can only end ambiguously: the camera optically zooms into the child’s eye until all we can see is a blue glint shining ecstatically in a black abyss.