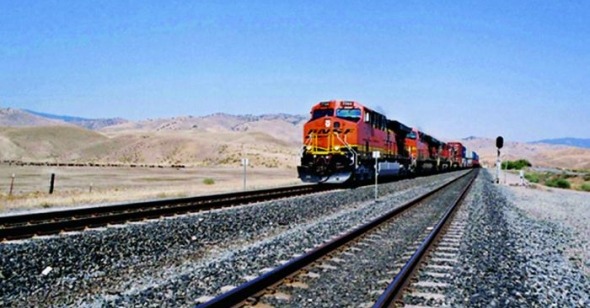 Brownish-gray ribbons of steel slice through every frame of RR. From right to left, top to bottom, on odd diagonals and slants, the parallel tracks of the massive American railway system divide each 16mm, old-fashioned 4:3-aspect-ratio shot of James Benning’s film. Each of the several dozen locked-down compositions features near-constant motion within its bounds, making this a rather action-packed entry into the canon of experimental landscape films. That this motion is always the same—a train enters the frame from one side, and exits the other—doesn’t diminish the visual stimulation provided by the variety of scenarios and vistas Benning captures. Binding each shot together, across wintry plains, bridges, sun-soaked towns, prairies, deserts, lush forests, and mountains are the unmoving gray rails.

When discussing James Benning’s work, it’s easy to stop at his flamboyantly simple structural conceits. The titles of the films themselves often encourage this limited avenue of analysis: infamous entries 13 Lakes and Ten Skies announce exactly what they are, their titles so benign they’re almost confrontational. (One could imagine Benning thumbing his nose at the skeptical, “Yep, the movie’s just ten skies. That’s all.”) Even so, within the confines of, say, a mere ten shots of clouds morphing across the sky, Benning manipulates his static frames with the finesse of an orchestra conductor (Ten Skies in particular feels almost symphonic in its movement, even though its camera never budges). Unconventional crime documentary Landscape Suicide’s palindromic structure is crucial to how it creates meaning, but its status as a curiously mirrored contraption never overwhelms Benning’s thorough deconstruction of nonfiction tropes that were already tired and worth prodding at in 1985. The smart alecky American Dreams (lost and found) fronts like a biopic of Hank Aaron told via images of cheap baseball memorabilia, but is actually an engaged, questioning portrait of two raucous decades of American history.

His films are often obsessed with history, and no less those focused solely on landscapes—”minor” events like the play of a shaft of light on water or the collision of two cloud banks may not be the stuff that makes it into the pages of textbooks, but in front of Benning’s camera, they’re momentous, at times near-cataclysmic. The forty or fifty pairs of gray train tracks in RR bring the filmmaker’s interest in a specifically American narrative into collision with his ongoing fascination with the contours of our nation’s landscapes. As trains roll by, the careful viewer might notice lettering on their sides: “Union Pacific,” “Cotton,” “South”—all evoke that solidifying half-century in which America warred with itself, and, incapable of truly reconciling, turned its national attention westward. Finished just a few years after the end of the Civil War, the Transcontinental Railroad linked east and west for the first time, a storied moment that RR references with a jaundiced glance in nearly every vanishing-point obsessed shot. The seeming endlessness of railroad-connected America constantly puts pressure on the limits of Benning’s filmmaking apparatus; you’re constantly cognizant of the camera’s limited vision (and your own, as well) yet aware that what you’re witnessing just keeps on moving, while you’re left in your seat.

Benning’s eye for nature is painterly and lovely, but the rails, burnt by the sun and continual use, suggest disease. They’re physical manifestations of rot in every frame. The sludge-colored lines rip scars across the countryside. They also serve to stitch it back together, but Benning clearly prioritizes natural organization over humanity’s attempts to impose itself on the landscape. Some of his most plangent compositions place the tracks off to the side of a vast field (say, of golden wheat bent by the breezes), unbroken until attention is turned to the massive engine and boxcars pushing noisily onwards. Stapled to the ground with giant nails, crossed with wooden ties, forever extending off into the distance, the railroad in RR is inexorable, ruinous, violent. Benning is careful to include shots in which the rails are almost invisible until a train rolls by—we’ve grown so used to the idea of this imposition on the natural order that sometimes we don’t even notice it. RR manages to demystify one of the foundational elements of the American mythology (the ever-expanding voracious railroad that formed the pathways of Manifest Destiny has never seemed so banal), yet in its cumulative impact also acknowledges the railroad’s continuing power as icon.

RR isn’t a totally somber affair. The gross misproportion of a massive train stalled in a comically small downtown area provides a droll Keaton-esque sight gag, while two passenger vehicles waiting patiently for a train to pass so they can cross the tracks evokes Tati. The film is often more rueful (“This Land Is Your Land” explodes with its intended irony when underscoring a train rumbling through a formerly serene landscape) than truly depressed (Eisenhower’s famous military industrial complex warning on the soundtrack is wholly ignored by an endless stream of freight cars carrying who-knows-what across the prairie), but it’s always politically charged. As with his more purely structural landscape efforts, it’s amazing how much meaning Benning is able to wring from simple ideas and juxtapositions. RR could be viewed as just a bunch of shots of trains passing by, but as with all of his films, the simplicity of form belies just how rich and deeply considered his cinematic investigations can be.

Benning, who can locate wonder nearly anywhere he points his camera, surely finds the unthinking, utilitarian gray of the rails an affront, the trace remnants of an industrial revolution that birthed a superpower and whole host of global ills right along with it. Sunset to sundown, east to midwest to west, north to south, RR always brings us back to that gray. The film’s final shot is masterful: the serene quiet of a wind farm is interrupted by a smoke-spewing engine that parks itself amongst the turbines. New technologies meet old in an all-too-appropriate finale for a film that would prove to be one of the last that Benning would shoot on celluloid before making the move to digital video. The tale of an audience fleeing in fear from the “first” film, L’Arrivée d’un train en gare de La Ciotat, may be apocryphal, but RR pays tribute to it in its repeated images of a train rushing towards the viewer from a host of different angles. It’s fitting: over one hundred years after the invention of film, Benning nods to its origins, while on the precipice of letting go of that world-changing invention forever. And the trains roll on.