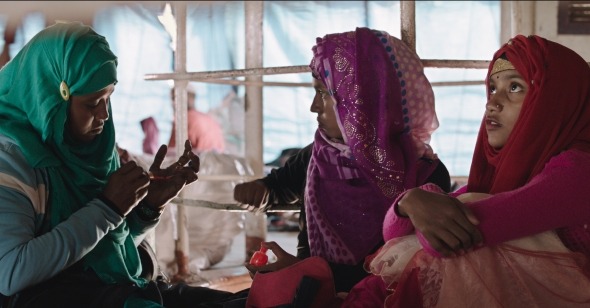 In 2012, Bangladeshi filmmaker Kamar Ahmad Simon made the documentary-fiction hybrid Are You Listening!, which concerned a family trying to protect and rebuild itself in the aftermath of a tidal wave disaster in a coastal town. His latest, Day after…, documents a journey aboard Rocket, a century-old paddle steamer boat, and forms the second film in his proposed Water Trilogy. To depict the journey a variety of people undertake on one such boat, Simon employs actors and non-actors, creating a motley crew of passengers. The film, which memorializes a vestige of colonialism and offers a social commentary on contemporary Bangladesh, premiered at IDFA earlier this year and played at MoMI’s First Look festival.

These paddle boats, brought to the then-colony by the British in the early 20th century, were made in Scotland for the British East India Company. Nicknamed “Rockets,” they used to provide the fastest and most efficient navigation through the country’s many rivers. Long ago replaced by smaller and more efficient ferries, Rockets still occupy a large chunk of nostalgic colonial retrospection in Bangladesh and continue to connect the capital city of Dhaka to smaller cities and towns that don’t fall on the ferries' routes. These boats—of which only four are left—are in varying stages of decrepitude, and are slowly being taken out of commission, making traveling in them difficult and even a little whimsical. If one manages to get a ticket, a last-minute snag can well cancel a scheduled trip.

It is within one of these long-haul journeys that Simon’s vérité film Day after… unfolds. The camera travels from the deck (where one can travel unreserved and cheaply) to the lower levels of first- and second-class cabins (with colonial-style long dining tables and serviced cabins) to the upper level, where an elderly Bengali man sounds the ancient steam whistle while shouting orders to a coworker. In traveling among these, the film peels off layers of class and access, and Rocket becomes a microcosm of the larger country.

In The Age of Empire: 1875–1914, the historian Eric Hobsbawm writes, “For all of us, there is a twilight zone between history and memory; between the past as a generalized record which is open to relatively dispassionate inspection and the past as a remembered part of, or background to, one’s own life.” In Simon’s reading of Bangladesh as a nation that has experienced “historical” postcolonial freedom twice—once from the British, and once from Pakistan—Rocket becomes that twilight zone, but also a relic of a nation’s memory, preserved and romanticized as an ongoing process, even when the relic is crumbling into general irrelevance. The film dissects Bangladesh’s status as a postcolonial nation that—like many other postcolonial nations—tries to establish itself as a “free” nation while holding onto symbols that tie it back to the period it wants to (impossibly) outgrow.

“Although we may ﬁnd it easy in nostalgic retrospect to identify friend and foe, oppressor and oppressed, on closer inspection we may ﬁnd it less easy,” writes the literary critic Dennis Walder as he expands on Hobsbawm’s text in the essay “Writing, Representation, and Postcolonial Nostalgia.” One understands differently and perceives newer realities even in the mundane—beyond the binaries of good and bad—when one is made to watch closely. Simon, also the film’s cinematographer, follows a few passengers through their journeys—a young vlogger whose drone eventually falls into the water; an extremely chirpy young woman who can’t figure out why anyone would want to make a film on a boat without a hero and a heroine; a little girl fearlessly traveling alone; a group of youngsters who often break into song; even a handful of politicians and high-society ladies.

The film is something of a social experiment in the ways in which a director can employ actors. “None of these people knew which characters were fictitious. I coached them separately. The students thought the politician was real, the politician thought the students were real,” Simon said in an interview with Variety. What emerges, then, is a character study of people who may or may not be presenting themselves as representatives of a certain class. While the absence of a clear demarcation between what is real and what isn’t raises some documentary ethics questions of authenticity and portraying “reality,” the larger narrative remains true to its goal of telling the story of a 150-mile journey down Bangladesh’s Ganges delta. Reminiscent of Albert Maysles’s In Transit, the film witnesses how a specific moment in space and time contributes to relationships between people who would never have met otherwise. Like in In Transit, Day after…’s story unfolds in the no man’s land between the origin and the destination, in an in-betweenness where the timelines of people’s “real lives” are suspended.

Simon’s commentary on the classism within Bangladeshi society is obvious—an argument breaks out when a second-class passenger tries using first-class washrooms; women sit together by the first-class dining table and talk about the ways they treat their house help. On a much subtler level, he depicts a building resistance to the rising Islamic fundamentalism in the country and—in a film made before the country’s 2018 elections—casts a critical eye on the extremely violent politics that is prevalent in the country. As news bulletins play in the background and passengers ruminate on religion, Rocket often gets stuck in sandbars that cause delays. Beyond the immediate emotionality of angry passengers demanding their fares back, one can’t help but remember that Bangladesh is on the frontlines of an impending climate crisis, living under threateningly rising sea levels. It is said that by 2050, one in every seven people in the country will be displaced by climate change. Simon’s patient vérité approach recalls Walder’s writing in that it denies easy demarcations between good and bad. In the introspection his style inspires, it becomes difficult to discern who to blame, the real from the staged, and the past from the future.

It is interesting then that the filmmaker translates the Bengali title Anya Din—literally meaning “Another Day”—to Day after…. While both these names look to an undefined future (especially with the ellipsis), the English title places the film’s events within a sequence of things; since there is an after, there has to be a before. “Another” denotes a necessary break in time, a sharp decision where one decides on one thing over the other. The altered translation, therefore, keeping in line with the film’s narrative, serves the continuous movement of time and water which, in spite of ebbs and sandbars, is always in motion.