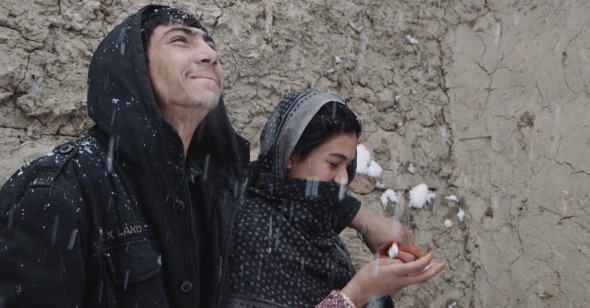 Over the Bridge
Bedatri D. Choudhury on Three Songs for Benazir

“To a Palestinian, a photograph of a child torn apart by a tank round in Gaza is first of all a photograph of a Palestinian child killed by Israeli ordnance. To the militant, identity is everything. And all photographs wait to be explained or falsified by their captions… Alter the caption: alter the use of these deaths.” —Susan Sontag, “Looking at War,” The New Yorker, 2002

“If I don’t go insane in your love, I will at least become half-witted,” Shaista sings to his wife, Benazir, in Elizabeth and Gulistan Mirzaei’s documentary Three Songs for Benazir. The young couple lives in a camp for displaced people in Kabul. We have seen camps like this one in several documentaries about Afghanistan, cameras zooming in on despondent men and crying women, or hovered over cracks on the walls. Rarely have we been shown two young lovers sharing a moment of intimacy, feeling a joy that bursts into song.

The filmmakers, who live in both Afghanistan and the U.S., first met Shaista and Benazir in 2010 when they were volunteering at the camps. Gulistan, who grew up as a refugee in Iran, formed an instant friendship with Shaista. “The situation in the camps is horrible,” Gulistan told me in an interview. “There is barely any food, there is no firewood.” And it was rareto meet someone like Shaista―so kind and loving―amidst all that squalor and hopelessness. His dreams and hopes to get educated, join the army, and make a better life for himself and Benazir caught Gulistan’s attention and, two years on, following many conversations with his partner Elizabeth, they decided to film their lives. Three Songs, filmed over nine years, is a peek into Shaista’s world and how he wants to make it better for Benazir and their children. Against the context of the 20th anniversary of the U.S. invasion of Afghanistan and the planned withdrawal of all American forces from the country, the film tells the story of two people living in a forever state of displacement.

The specter of war and American surveillance engulfs all lives in Afghanistan. We see a surveillance device floating above the young couple’s heads. “That balloon has been sent by the Americans and foreigners to watch us,” Shaista tells his wife. One is reminded of the hovering helicopters in the couple’s earlier film, Laila on the Bridge (2018). “There's a lot of poetry in Shaista, and he would just break into song. Benazir could be very stoic and strong, but then she would often cave in under Shaista’s bursts of affection,” Elizabeth told me. “They defy the expectations that a lot of people around the world, even people within Afghanistan, place on people from Afghanistan who live in camps. There is always an expectation of sadness.”

As much as war forms the core of Afghanistan’s tragedy, perhaps the sadder reality is the acute dehumanization of Afghan lives engineered by the Western media. Through decades of a certain kind of documentary storytelling and news reporting, audiences are so used to seeing images of poverty and abjection that the even the smallest act of affection―a blushing Benazir lightly hitting her husband’s arm, asking him to stop singing praises about her eyes―comes across as extraordinary and radical. Three Songs for Benazir not only compels its audience to look at Afghanistan beyond the immediate context of war but also reconfigures the set ideas of marriage and romantic love they may have within the context of Islam.

For the 2004 film Unveiling Afghanistan, Brigitte Brault, a white woman, collaborated with the AINA Women Filming Group and travelled to cities in Afghanistan, where they sometimes found it hard even to find women who would face the camera. Several women talk of unhappy marriages, forced marriages, some when they were children. There is no doubt that Afghanistan, like many other countries, represses its women through various direct and indirect state apparatuses, but one can’t ignore the tacit invasiveness of the act of “unveiling” something in documentary filmmaking, especially within a context where the veil is a social custom, a way of life often adopted by choice. This act of exposing is essentially an archaeological or anthropological one―driven by curiosity at best, colonialism at worst. A name like Three Songs for Benazir signifies an offering, a lightness of touch as opposed to the harshness of an exposure, an act of surrendering over extraction. This vital difference in the politics of gaze and of handling the protagonists’ story is what setsThree Songs and the Mirzaeis’ films apart.

As an opening slide in Laila on the Bridge told, Afghanistan produces 90% of the world’s opium. This high yield, combined with a political and economic instability and resultant high rates of unemployment, has created a situation where, according to a recent UNODC report, over one million Afghans (age 15 to 64) suffer from drug addiction, especially opiates. Having made Laila, the filmmakers were aware of the country’s addiction epidemic. That film documented Laila Haidari’s attempts to reform opium addicts, most of them homeless and living under a bridge, sometimes literally dragging them to the rehabilitation centers she runs, as well as her encounters with the government while trying to raise money for her facilities. “With Laila, we were really drawn to the fact that she recognized the inherent dignity of every person,” says Elizabeth. “She really believed that if she was able to help one person, then it was all worth it,” Gulistan adds.

In Three Songs, these issues remain prevalent. When Shaista’s father and elders refuse to sign a letter of permission that would allow him to join the army, he decides to work in the poppy fields. “We were not sure what we're going to do with the film,” Elizabeth says, “Because he didn’t end up joining the army. He left the camp to harvest opium, and we held on to the footage for a few years.”

When the Mirzaeis couldn’t get in touch with Shaista, Gulistan sent his nephew, Homayoun, to look for him. “A documentary filmmaker’s primary duty is to ensure that no one in their film is endangered. We wanted to make sure that whatever we did, we would not endanger Shaista and Benazir in any way, even if it meant the footage sitting unused forever,” Gulistan says. When Homayoun found Shaista, he was under the same bridge Laila dragged men from, and had become addicted to opium. On the insistence of the filmmakers, Laila agreed to take him in. The Mirzaeis hadn’t imagined their films colliding this way.

After almost a decade, in 2019, it was time for them to come back to Shaista’s story. “When Shaista did not join the army, we didn’t want the film to end with him working in the fields. That didn’t feel like the end of his story,” says Elizabeth. Gulistan adds, “Granted, his addiction was unfortunate, there was still that hope in him; he wanted to get better and be a better husband to Benazir. They were still trying to make things work. We felt that even though there's so much inevitable sadness in the story, there was also the desire for something better. That is why we made Three Songs the way we did.” With the focus on Shaista’s offering of hope and songs, the filmmakers emphasize the resilience of their protagonists, who still, in their own little ways, continue to defy entire industrial complexes that benefit from pushing Shaista and Benazir into an eternal haze of addiction.

Three days before I watched Three Songs and Laila, the Indian photojournalist Danish Siddiqui was killed on the job, while photographing a clash between the Afghan Special Forces and Taliban insurgents in Kandahar. For much of the Indian media, paying obeisance to a right-wing Hindu government, this death was deemed a result of the barbarity of a Muslim nation. Some questioned why a married man, a father of two, would risk his life working a job like that, while for others, it seemed like a karmic retribution for Siddiqui’s daring to critique the government’s handling of the Indian COVID crisis. Choice is a sticky word people use to avoid looking at the larger forces that define our lives.

“War, war...Everything comes from the war,” Laila Haidari exclaims in Laila on the Bridge. One must remember that the American invasion of Afghanistan—which created what we’d call the Afghanistan War—also caused the country’s opium production to skyrocket. The forces that govern the lives and the choices of people like Haidari, Shaista, or Siddiqui lie far beyond their control. But their daily resistance lies in the ways they confront these forces. Siddiqui made pictures, Shaista sings, Laila cares, and the Mirzaeis, per Susan Sontag, alter captions.