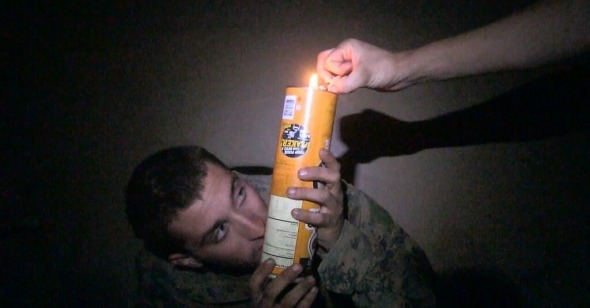 Come and See
by Emma Piper-Burket

The earliest known mention of a camera obscura is from the 5th century B.C. Chinese philosopher Mozi recognized the phenomenon of light passing through a small hole into a darkened space to create an image of what's outside and called it a “locked treasure room.” Centuries later it’s believed that many of the Old Masters—da Vinci, Caravaggio, Vermeer—may have used the camera obscura to achieve realistic perspective in their paintings, an aid in the transmission of reality from one place to another. Riffing off this invention of early cinema, Marine Corps Veteran and film director Miles Lagoze and his editor Eric Schuman construct an unflinching portrait of the ongoing war in Afghanistan with their documentary Combat Obscura.

Four title cards at the beginning of the film, intercut with footage of Marines blowing up the “wrong” building and joking around in a tent, set the officially unofficial tone of what is to come in the following hour:

The views expressed by the individuals filmed in this documentary are solely their own and do not reflect the official policy or position of the Department of Defense or the U.S. Government.

Our job was to shoot and edit videos for the U.S. Marine Corps.

We filmed what they wanted, but then we kept shooting.

Save these initial guideposts, scenes are presented without commentary or context. The disjointed vignettes stretch time, and give a sense of endless futility to the soldiers’ days. They are shot at, they joke and goof around, and towards the end of the film one of them is killed. While there is no clear narrative arc, there is a slow escalation throughout the film that builds to show quite clearly how the confluence of time, boredom, prejudice, and weaponry create a situation with devastating consequences for all involved.

In an early scene a soldier sits in a field with two local boys; he calls his Afghan translator over the walkie-talkie because he thinks the boy is telling him about a bomb. The translator speaks to the boy and tells the soldier he doesn't have anything to say, he was just asking for a cigarette. The soldier, unsatisfied with the explanation, says under his breath, “little fuckin' liar.” In a subsequent scene soldiers point a gun at a man in a field, forcing him to strip. Later a group of men are held under house arrest for hours because they are suspected Taliban members; it's discovered that they were all innocent. Nearing the end of the film, a group of soldiers torture a chicken. That scene cuts to a group of soldiers as they discover they accidentally shot and killed a shopkeeper. “Oh man, we killed a shopkeeper?” “They want to get rid of the body and hide it... this is no good for people to see.” As they wrap the body in a mat, the camera cuts to a group of soldiers on base watching Austin Powers: The Spy Who Shagged Me on a portable DVD player.

We live in a time of image saturation; what atrocity escapes unrecorded? And those that do, when they finally come to light, never seem quite as shocking as they should. No scene in Combat Obscura will surprise the jaded audience we have become (except perhaps an early stereotype-crushing scene of a group of soldiers smoking hash on a rooftop). People against the war will feel vindicated by the scenes of senseless violence, while those supporting it will focus on the scenes of Marines being shot at and killed and it will confirm their worldview accordingly. For those of us who have never been to war, it is easy to try and make it just about one thing. By repurposing the footage initially recorded to serve as promotional material for the Marine Corps, Lagoze subverts any idea of a monolithic truth.

Where Combat Obscura is unerringly effective is in its ability to convey the rhythm of life for soldiers in Afghanistan. Intercut between the dramatic instances of gunfire and violence are mundane moments of boredom, fatigue, and watching movies. The film is an endless dance of drama and futility that feels as though it could have been playing on a continual loop over the past two decades. As the war in Afghanistan stretches into its 18th year, it’s shocking to consider that multiple generations of soldiers have experienced the same sense of banality in the same war. A young soldier shipping off to Afghanistan in 2019 may not have been alive to experience the events that precipitated U.S. presence there, but as the scenes unfold in Combat Obscura it's easy to understand just how similar their experience in Afghanistan would be to those who enlisted just after watching the World Trade Center fall in 2001. Using the footage that he and his fellow combat cameramen shot, Lagoze creates a kind of universal diary that is both highly intimate and non-specifically timeless, providing a window onto a world that few not donning a soldier's uniform can experience.

The final scene is a series of video messages soldiers are sending home for Christmas. The last soldier on camera starts and then says, “You know what? Just, never mind, don’t worry about it” and walks off screen. With that abandonment, the film is over. It's a jarring ending to a film packed with so much intensity and conflicting emotion, leaving the viewer to question what is really so important.