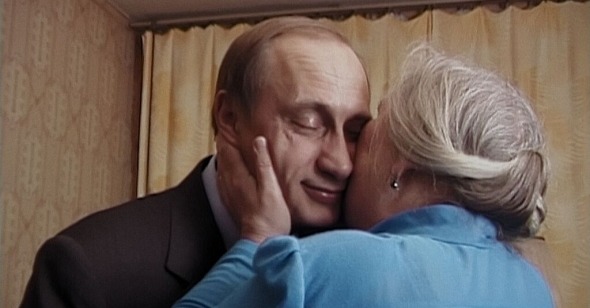 The Roles We Play
Emma Piper-Burket on Putin’s Witnesses

On the evening of March 26th 2000, Boris Yeltsin sits in his home, surrounded by family; Vladimir Putin has just won the Russian presidential election. “It's my win,” Yeltsin tells his daughter as the results are read over the television. Just three months earlier, Yeltsin resigned and made Putin the acting president, knowing full well that this move would bolster Putin’s chances of winning the election. When it becomes clear the plan worked, Yeltsin calls to congratulate his protégé. An aid in Putin’s office picks up and tells Yeltsin they’ll call him back. The mood in the room changes, becomes infused with anxiety and irritation, now instead of celebrating they are waiting. The phone rings, Yeltsin tells someone to mute the TV as he answers the phone. “All right, fine.” He hangs up and, to no one in particular, says, “He has just left, they’ll tell him and he’ll call back.” The room falls into an awkward silence, there is some debate, “He’s hanging out,” or “Maybe he’s taking a bath.” An hour and a half passes; the camera crews are dismissed. This isn’t a history-making moment, yet it succinctly foreshadows the years to come. This was not to be a passing of the torch from the Yeltsin years as they so clearly thought, but something else entirely. It's almost incomprehensible that such a raw scene would be visible to anyone outside of the room, yet it plays out at the midpoint of Putin’s Witnesses. Vitaly Mansky’s latest film is a personal document of historical reckoning culled from hundreds of hours of footage collected during his tenure as official videographer for Putin’s election campaign and early presidency.

Putin’s Witnesses is made up mostly of these quiet side moments, like the scene described above, meaningful glances, far-off looks, essentially the outtakes from the propaganda pieces Mansky was originally hired to create. History is taught as a collection of significant events occurring on specific dates; through his film Mansky offers an alternate theory: it is what happens in the margins that reveals the deepest truth and foreshadows the future with the clearest eye. In a Q&A after the film screened in Toronto in September 2018, the moderator asked Mansky why he made this film now, and his reply was that he wanted to know, “How did we voluntarily let happen what happened to Russia today. Without understanding the past, how can we know how to move forward?” It’s a question that hits home in the current global political climate.

While the initial draw of such a film for many might be the unprecedented access to a contentious political figure, Putin as he appears in front of Manksy’s camera is only ever so slightly more casual and less polished than he appears years later in Oliver Stone’s highly calculated The Putin Interviews. It makes it seem as though he came onto the world stage an already fully formed statesman. Mining through his footage Mansky has found instances when the veneer cracks, such as when Putin persists in trying to explain why he wanted to bring back the Soviet melody of the national anthem. He offers an explanation and then calls Mansky the next day to clarify his case. “You see? We are already bringing together our positions,” Putin says to Mansky, satisfied. Mansky muses, in narration over an image of Putin looking at him, “I don’t know why Putin needed to persuade me of his decision... Wasn’t there anyone left around to disagree with him?” This was one year into Putin's presidency.

One of the most striking details in the film is the intimacy Manksy shares with his subjects. “Vitaly, stop filming,” Tatyana Yeltsin says carelessly as she’s searching for champagne glasses to celebrate Putin’s victory with her father on election night. And later, Putin himself flashes a familiar smile towards the camera, “Hi! It’s you again with your pussycam.” “Careful, the camera is on,” Mansky replies to the president. Such casualness and familiarity with Mansky’s camera is mirrored in the opening of the film, featuring home movie footage from New Year’s Eve 1999 in Mansky’s apartment, where his wife and two daughters also beg him to stop filming them. It is clear he is a part of both families. This point is driven home even more clearly later on in election night. As Mansky’s camera circles round the campaign office, he narrates a laundry list of all the people in the room who have defected in the 18 years since (everyone but Dmitry Medvedev, who is currently Putin’s Prime Minister). What’s not spoken, but impossible to ignore, is Manksy’s own form of defection through the creation of this film and the questions it poses. As the film unfolds, it’s hard not to feel anxious for Mansky and his family, as if examining the past is a betrayal of his own role in it.

Mansky is fully forthcoming about the possibility that the film he made during the three months Putin served as interim president helped him win the election. The filmmaker discloses which scenes were his idea to record, such as when Putin visits his much beloved elementary school teacher on a trip to St. Petersburg. From the footage that comprises the film, Mansky carefully looks at the past in order to better understand his role in it; it’s reflective without ever feeling like a confessional. In a time when many of us are undertaking the collective task of reckoning and reevaluating our cultural and historical past, Putin’s Witnesses is a beautiful example of how the individual affects the whole.