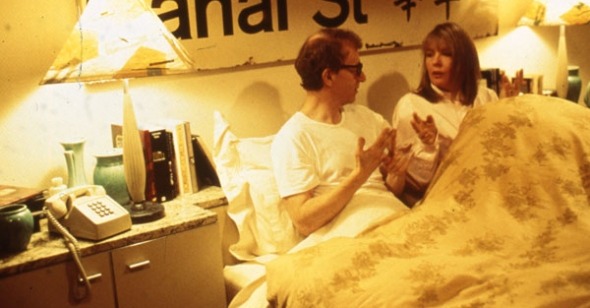 When you‚Äôre coming of age as a movie-watcher, and just growing aware of the idea of auteurism, or at least that there are certain filmmakers who have attained a grandeur that sets them apart from the vast landscape of movies, you also grow a steely resolve against such notions. It‚Äôs difficult to jump right into an oeuvre; and tenfold if you‚Äôre still just a kid. In my case, I needed a gateway film into the work of Woody Allen‚ÄĒgrowing up in a Jewish household, of course, his name had always been spoken well of, accompanied by a few chuckles, as well as a certain degree of reverence usually withheld when it came to mere comics. My first encounters with Annie Hall and Hannah and Her Sisters didn‚Äôt go over well, their mix of headiness and froth was confounding and even downright unpalatable to an undeveloped intellect such as mine; and the shenanigans of Sleeper truly boggled the mind with the film‚Äôs plus-sized sight gags, political commentary, and disregard for narrative conventions.

I needed to be eased in, and that chance came with Manhattan Murder Mystery, which not only moved along with a buoyancy that didn‚Äôt preclude linear narrative; it was a new film, when I first saw it in 1993, so it had the bonus of freshness‚ÄĒsomething I could embrace as a film of my generation rather than of my parents‚Äô, something that wasn‚Äôt seemingly trapped in amber (yes, Hannah was a mere seven years old, but in kid years that was an eternity). Hilarious that a film that takes as its subject the restlessness of middle-age should appeal to a kid of fourteen, but by some alchemy, Woody Allen clicked for me with Manhattan Murder Mystery‚ÄĒthe actor/director‚Äôs nebbish persona, the New York adoration, the individualized aesthetic, the film history recall. Coming right after the drenched-in-scandal Husbands and Wives surprised the mainstream movie world by employing jittery, handheld camerawork, Murder Mystery used the same shaky-cam for a completely different effect, lending the film‚Äôs intricate and silly crime-caper plot a scatterbrained immediacy.

Whereas Annie Hall was totally alien to me (engaging in young neurotic love in New York City might as well have been raking pebbles on the moon), an aging couple with empty-nest syndrome spying on their neighbors had a vivacity and a tender, domestic recognition. It also helped that Diane Keaton was given front and center this time around; it‚Äôs one of her most fine-tuned, joyous performances, and she‚Äôs allowed to run the comical gamut, from daffy nosiness (regarding her seemingly normal little old Jewish neighbors) to marriage frustration (with her ‚Äúfuddy-dud‚ÄĚ husband, Woody‚Äôs unadventurous book editor Larry) to giddy flirtation (with her best friend, Alan Alda‚Äôs unmarried restaurateur wannabe) to seething jealousy (against Anjelica Huston‚Äôs hotshot writer, one of Larry‚Äôs star clients).

‚ÄúToo much Double Indemnity,‚ÄĚ Larry warns Carol when he fears she‚Äôs becoming too manic in her pursuit of her neighbor‚Äôs guilt over the sudden heart-attack death of his wife‚ÄĒyet Allen‚Äôs obviously the one doing the studying of classical Hollywood crime thrillers. Murder Mystery‚Äės got a surprisingly sturdy plot; though it moves along via wild coincidences and slapdash logic gaps, it‚Äôs full of enough twists and turns and has so many virtuoso surprises up its sleeve that it could have stood on its own without having to go all mega-meta hall of mirrors-ish in that Lady from Shanghai climax. Again, there are moments you look forward to like favorite tracks of a CD: Keaton‚Äôs middle-of-the-night spy session, in which an exasperated Allen unsuccessfully ‚Äúforbids‚ÄĚ her to peek on the neighbors (‚ÄúI forbid you to go! Is that what you do when I‚Äôm forbidding? ? Well, if that‚Äôs what you‚Äôre going to do then I‚Äôm not going to be forbidding you a lot‚Ä¶.‚ÄĚ); Huston‚Äôs backfiring ruse to trap the killer, in which the group uses an unreliable spliced-together tape to try and blackmail him over the phone (‚ÄúYes, they‚Äôre keeping it refrigerated!‚ÄĚ); Larry and Carol sneaking into a hotel after hours, checking up on a lead, only to be trapped in a dark elevator with a dead body.

It‚Äôs the perfect updating of the bumbling detective, wedded to Allen‚Äôs eternal fish-out-of-water persona and Keaton‚Äôs game resolve. With musty memories of Murder, She Wrote, that concurrent Dick Van Dyke geriatrics-on-the-trail show, and now Monk, it seems that only Woody could make the aging-sleuths subgenre seem fresh. And it still does. It‚Äôs said that Annie Hall‚Äôs origins were as a comical murder mystery itself (‚ÄúAnhedonia‚ÄĚ), and if that‚Äôs the case, it seems to have been a good move to wait until these two actors hit their peak. To paraphrase Keaton‚Äôs Carol, the roles fit them like an old pair of shoes (‚Äúbut never comfortable,‚ÄĚ Larry adds), and this is the sort of chemistry that can only be honed over many years.