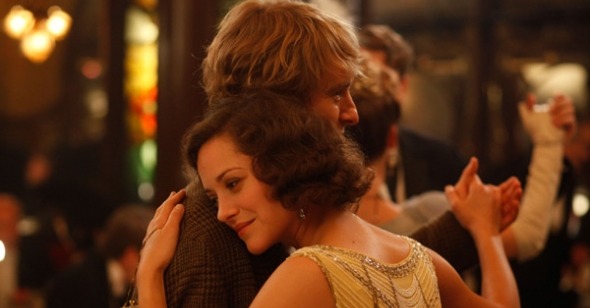 Woody Allen‚Äôs Midnight in Paris begins with a remarkably extended series of lovingly framed shots of the city of light. Initially it‚Äôs reminiscent of the opening credit sequence for Richard Linklater‚Äôs Before Sunset, but the sheer length of this moving photo album clues us in that something different is going on. The images unfurl with such unceasing beauty that it almost becomes too much: sure, we get the Eiffel Tower, the Seine, the Champs-Elys√©es, the Moulin Rouge windmill, Notre-Dame, but also less hallowed nooks and crannies, sundappled cobblestone, the steps of Montmartre from a variety of angles. The images take us from morning to night, all in the space of an entire song, which Allen allows to play out in its entirety.

Clearly many will compare this boldly lengthy opening to that of Allen‚Äôs Manhattan; the major difference is that there is no voice-over this time. The velvety Gordon Willis images that make up the opening five minutes of the director‚Äôs 1979 masterpiece, set to the driving whimsy of Gershwin‚Äôs ‚ÄúRhapsody in Blue,‚Äù are laid over with Allen‚Äôs halting cadences as his character Isaac tries to cough out the opening of a novel. ‚ÄúChapter One. He adored New York City. He idolized it all out of proportion . . . no, make that, he romanticized it all out of proportion.‚Äù There are many stops and starts and one never knows if Isaac, or Woody, finds a proper opening line. But that first variation is the one that sticks. Viewers tend to remember the coffee-table-book handsomeness of that prologue, but it‚Äôs the ambivalence of the narration that truly sets the scene (apart from a handful of other luscious black-and-white compositions, the film is largely a scathing takedown of its characters‚Äô self-absorption and self-fulfilling crippling neuroses). Allen/Isaac is not merely expressing his love for the city he lives in‚Äîhe‚Äôs seeking absolution. Now, in 2011, Allen has turned his eyes to Paris, and it‚Äôs an uncomplicated love, not requiring any sort of deflating oratory. It is not burdened by Allen‚Äôs perceived failures or secret histories. In one shot after another, it simply exists, radiant, magical.

The surprise of Midnight in Paris is that Allen goes on to acknowledge that magic as a mirage. The charm of the film is that he does so while retaining that very magic. It‚Äôs a lovingly conceived and crafted bauble of a film, one of Allen‚Äôs one-note, high-concept fantasies (a personal subgenre that also includes the spellbinding Zelig, The Purple Rose of Cairo, and Alice, as well as the miscalculated The Curse of the Jade Scorpion). In it, Owen Wilson is Gil, a fussbudget writer touring Paris with his fianc√©e, Inez (Rachel McAdams), her snotty, politically conservative parents in tow. Inez wants to move to Malibu after the wedding, so that Gil can be near the Hollywood community in which he is suddenly in demand as a screenwriter; Gil would rather move to Paris and live a romantic life as a struggling novelist. It‚Äôs not worth wondering how this thoughtful creative type might end up entangled with this shrewish pragmatist and her snobbish family‚Äîwhat matters is that Gil‚Äôs dreaminess registers as a universal malady. Gil not only wants something impractical in the present, he also longs to live in a glorious past: the Paris of the 1920s.

Who can blame this starry-eyed American nebbish? Can you imagine being a fly on the wall while his country‚Äôs expatriate novelists commingled with the destined icons of the avant-garde? Or sit in just once on Gertrude Stein‚Äôs weekend salons? The timelessness of art looks particularly glowing in hindsight. One night, after wandering away from Inez and her insufferable acquaintance Paul (Michael Sheen, as apt a pompous pedant as he was a klutzy Mr. Wrong on 30 Rock), Gil finds himself in an unfamiliar corner of the city. At the stroke of midnight, an anachronistic-looking Peugeot pulls up and whisks him away, along with some drunken revelers in period dress. Not long after arriving at a champagne-fueled soiree that wouldn‚Äôt seem a strange fit for a soused Jack Torrance, Gil realizes he is not a last-minute attendee to a costume ball chatting with a friendly couple named Scott and Zelda, but rather that he has time-traveled to the 1920s and he is conversing with the actual F. Scott and Zelda Fitzgerald.

On this and future magical midnight sojourns, Gil goes on to trade pleasantries with a hearty Hemingway, glean writing advice from a grave Gertrude Stein, get confounded by a demonstrative Dal√≠, and even offer plot suggestions to a befuddled Bu√±uel (in one of the film‚Äôs funniest moments, the Spanish surrealist cannot comprehend Gil‚Äôs Exterminating Angel pitch: ‚ÄúWhy don‚Äôt they just leave the room?‚Äù). Playing against these ethereal straight men (all exquisitely cast, including Adrien Brody in a ‚Äúwhy didn‚Äôt I think of that?‚Äù turn as Dal√≠), Owen Wilson is an enchanting audience surrogate throughout: by nature of this film‚Äôs fantastic conceit, it‚Äôs the first time I can recall that we are almost completely aligned with the point of view of the ‚ÄúWoody Allen character‚Äù: we are as astonished and delighted as he is. There‚Äôs no doubt that Gil is an approximation of Woody, as evidenced by his stumbling speech patterns and dumpy khakis (do Woody protagonists ever wear jeans anymore?), but the drawling Texan makes the role his own. Wilson‚Äôs slack-jawed sincerity has a softness that Allen could never muster and which other Woody wannabes would never leave room for amidst all their rehearsed fumbling (Kenneth Branagh in Celebrity, John Cusack in Bullets Over Broadway, Edward Norton in Everyone Says I Love You). The cracking delight in Wilson‚Äôs voice as he avoids playful fisticuffs with Hemingway or explains his time-travel scenario to a not-in-the-least skeptical Man Ray is one of the great joys of the film.

But its heart belongs to Marion Cottilard. The French actress has been making the requisite post-Oscar rounds surrounded by big-budget mayhem in films like Public Enemies and Inception, but in them has consistently managed to create affecting miniature portraits out of what on the page would seem like not only minor roles but intentionally symbolic and wispy. She appears first in full-blooded close-up, standing in a doorframe at Stein‚Äôs salon, all mystic feline eyes. Cinematographer Darius Khondji lights her with the same transcendent burnish that typifies the film‚Äôs nighttime scenes (by contrast daytime Paris has a touristy blown-out feel, and especially when taken over by Inez‚Äôs waspy family, an antiseptic sense of courtesy). Her Adriana is introduced as a muse to a flustered Pablo Picasso, and is later whisked away to Kilimanjaro by Hemingway‚Äîbut as deepened by Allen and Cotillard, she is no mere plaything but a drifter like Gil, searching for a way out of her own chronic dissatisfaction. Gil yearns for the twenties as a respite from our hopeless present day; Adriana sees her own roaring times as nothing more than a desperate imitation of earlier golden ages, namely the Belle Epoque. Naturally these two souls find one another, but their need to live out of time paints them as a truly poignant couple who can perhaps never be together. If reconstituted as a tragic romantic fantasy along the lines of Somewhere in Time, Midnight in Paris could have been heart-wrenching.

Midnight‚Äôs tone, however, is merely wistful. Ultimately, Allen doesn‚Äôt go for the teary crash-landing of The Purple Rose of Cairo, with its stirringly sad affirmation that life indeed goes on and every movie must come to a close. (That film‚Äôs final shot of Mia Farrow looking up at that flickering screen of Astaire and Rogers, as her expression evolves from despair back to elation, should remind moviegoers that Allen has often proven himself the master of the close-up: there are similar moments of cleansing disillusion writ on characters‚Äô faces in Hannah and Her Sisters, Another Woman, and Crimes and Misdemeanors.) In Midnight in Paris, Allen refuses to finally let go of the magic, allowing Gil a more practical, less supernaturally sublime, romantic pairing. Here we have Woody Allen parlaying his pessimism about contemporary culture into a fable about nostalgia that allows him a refreshing self-critique. One can‚Äôt live in the past, even filmmakers allegedly past their heyday. By retreating to the past, Allen has taken a step forward.