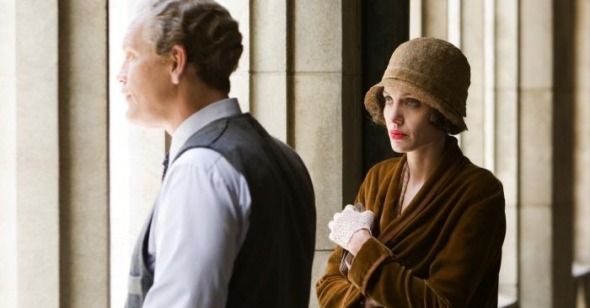 The Song Remains the Same
By Eric Hynes

The film has yet to begin, but the foreboding is already underway. A moody, bluesy sax plays over the production and distribution cards, then the words ‚ÄúA true story‚Äù appear against a black screen. The music continues somberly, plaintively, as if a funeral were about to commence. And as it happens, that‚Äôs what Changeling will inadvertently channel. Trudging forth with an ominous gait, haunted from the outset by its own narrative and formal inevitability, Changeling is a musty lament for something long gone‚Äîa lost child perhaps, but more so this sepulchral cinema of quality. Watching it, one can only try to locate whatever semblance of life remains, then tramp the dirt down.

With metronomic efficiency our protagonist appears, kisses her nine-year-old boy awake, trolley-cars him off to school, works a hard day, and brings her son home, each beat deliberately declared to echo later in the story. As Christine Collins, a single mom who works as a telephone dispatcher in Los Angeles in 1928, Angelina Jolie seems amiss: fashionably decked in a tube dress and black bobbed weave, roller-skating through rows of phone operators, her super-sized lips burning crimson as she answers a portable receiver holstered around her neck; she‚Äôs all set for a Smithsonian historical diorama. She‚Äôs also, especially when lost in a calf-length trench coat, positively skeletal. So from the outset she looks stricken (with anorexia and portent), even though the script demands that an eternal bond be established between Christine and son Walter in fifteen minutes or less, which they forge through the emphatic repetition of the breezy, it‚Äôs-the-1920s greeting ‚ÄúHey, sport.‚Äù On the weekend, Christine gets called into work and has to leave her son home alone. ‚ÄúI‚Äôm not afraid of the dark,‚Äù he says, as if prodded by an off-screen animal trainer. ‚ÄúI‚Äôm not afraid of anything.‚Äù Uh-oh. Then Jolie departs, looking back at the house one last time, the camera pulling away from Walter standing sadly at the window, music swelling. This is no ordinary goodbye. Indeed, this is how the film dispatches with Walter‚Äîright at the fifteen-minute mark, right on schedule.

What ensues, based on appalling real events, involves Walter‚Äôs disappearance, Christine‚Äôs desperate pleas for help, an unresponsive Los Angeles Police Department, and then a dog and pony deliverance of the boy back to his mother. Except the returned boy is not Christine‚Äôs boy: he‚Äôs an impostor. Out of shock, Christine is coerced to ‚Äútry out‚Äù the boy for a few weeks. She quickly rights herself, attempts to end the charade, and begs the LAPD to resume searching for her missing child. She‚Äôs rebuffed, rebuked, and bullied by Police Captain J.J. Jones (Jeffrey Donovan), who‚Äôs intent on keeping the case closed and protecting the force from embarrassment and bad PR. Christine finds support in a crusading radio preacher, played by John Malkovich, whose stock arrhythmic delivery is powerless against the plod-plodding of the narrative. Christine gets sent to an insane asylum for starting trouble, meets a tough call girl (Amy Ryan, an odd interloper from the 21st century), and hits her stride as a crusader.

Up to this point, Changeling proceeds like a rusty but functional jackhammer, clearing the ground of ambiguities to establish Christine‚Äôs sainthood and ultimate badass-ness. Sanctifying the protagonist ambers Jolie in practiced movements and reedy line readings. Her chin-quivering hysterics never vary, and neither does her mantra, always screeching the obvious, ‚ÄúThat‚Äôs not my son! I want my son back!‚Äù Despite her flowing tears and ear-blasting insistence, her sorrow never approaches that scary threshold where losing herself and her grip on reality seem possible. A headier film would have dwelled on Christine‚Äôs initial acceptance of the impostor, and of the uneasy ad hoc family that she had to foster with the strange orphan while fighting to reopen her real son‚Äôs case (a few quick scenes serve only to make sure we can tell the difference between the two boys), or explored the creepy, psycho-sci-fi evocations of its own title. But first-time screenwriter J. Michael Straczynski just pushes forward, following the rules, making damn sure the audience always identifies with his protagonist, best achieved by contrasting her starkly from the big, bad LAPD. Dastardly Captain Jones is but a twisty mustache away from pure villain‚Äîevery line‚Äôs an invitation to boo and hiss at the screen.

But just when you thought the cops were the baddest of the bad, Changeling becomes a serial killer story. There‚Äôs a farm out in the sticks, a deviant with an axe and a habit of butchering little boys, a witness (yet another unfortunate child actor), a manhunt, an arrest, a trial . . . and it just keeps going. As killer and genuine creep Gordon Northcott, Jason Butler Harner gives the film the necessary groove-skip that Malkovich could not, but the new narrative strain interferes with the old one, invading Jolie‚Äôs crusader story with shots of shadow axes falling and boy blood spurting. Which might have been interesting, or at least disastrously fun, if the film weren‚Äôt so consistently, blandly directed. Oh, right. Some famous dude directed this thing.

I‚Äôd prefer to blame this one on producer Brian Grazer. That would be the easiest thing. The man with the troll-doll hair has spent the past 30 years overseeing a bounty of middling, milquetoasted prestige product‚Äîlike this one‚Äîthat limply aims only to seem Oscar-worthy, or worth seeing, or something. There have been a few exceptions, of course, but how could there not be? Even the dizziest child occasionally rejoins the donkey to its tail. But even Grazer-produced films that I‚Äôd consider decent‚ÄîReal Genius, Boomerang, 8 Mile, Parenthood, Inside Man‚Äîdon‚Äôt exactly hold up under scrutiny. A generous survey would credit him for his executive work on television shows such as Arrested Development and Friday Night Lights, but again: dizzy boy, donkey tail. So looking over Grazer‚Äôs production line, especially at the Ron Howard collaborations (Ransom, Edtv, The Missing, Backdraft, The Grinch, The Paper . . . really now, The Paper?), it‚Äôs tempting to see this latest glass of vanilla (both Grazer and Howard are producers) as their responsibility. There‚Äôs some cause for this view.

But placing the blame on Grazer and Howard relieves me of having to explain how director Clint Eastwood went from Letters from Iwo Jima, a masterful, late-career-capping film, to Changeling, which is a pandering slog. Even a workmanlike Eastwood film such as Million Dollar Baby clicks like a modest song performed by a tight band. Alas in Changeling, the same bandleader conducts a series of pithy one-note solo blasts, backed by his own numbing score of bluesy lament. The funereal tone smothers everything, striving for City of Angels noir but exploring neither its light nor its shade, and generating no heat. It‚Äôs hard to botch a Jazz-age Job story as compelling as that of Christine Collins, but Clint and co. have done just that. Blame it on the blocky, schematic script, or Grazer/Howard‚Äôs life-sucking stewardship, or Eastwood‚Äôs perfunctory paint-by-numbers proficiency, or Jolie‚Äôs hysterical blankness, but really it doesn‚Äôt matter: Changeling was dead on arrival. Sorry, sport.