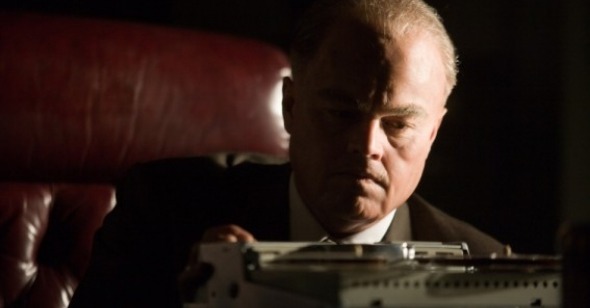 I‚Äôm not sure if anybody has made the ‚ÄúGrumpy Old G-Men‚Äù joke in reviewing Clint Eastwood‚Äôs J. Edgar, but if not, I‚Äôd like to claim it. Watching Leonardo DiCaprio and Armie Hammer putter around in geezer makeup as the eponymous FBI director and his prot√©g√©/girl Friday Clyde Tolson, one is moved not to contemplate the inexorability of bodily decay or the tragedy of unrequited affection‚Äîto name but two of the themes attributed by other critics‚Äîbut rather the squandered comic potential of an Odd Couple knock-off set in the corridors of American political power.

The film is still pretty funny by late-Eastwood standards, trailing only Gran Torino as a yuk generator. Eastwood‚Äôs supposedly wry self-deconstruction in that film‚Äî‚ÄúGet off my lawn!‚Äù etc.‚Äîalways struck me as a more or less straightforward exercise in icon maintenance: the fact that Dirty Harry was for once on the wrong side of the climactic hail of bullets was just a sentimental detail, signifying not a shift in the star-director‚Äôs political consciousness but rather his increased sensitivity to the cultural moment. It was essentially a pandering variation on the genuine breakthrough he achieved in Unforgiven, which, among other virtues, was a film with an actual screenplay. (No surprise that Gran Torino scribe Nick Schenk hasn‚Äôt written a thing since‚Äîperhaps he ran out of cocktail napkins).

J. Edgar also has a screenplay, by Milk‚Äôs Oscar winner Dustin Lance Black, and it‚Äôs wildly ambitious, combining elements of biography, forbidden romance, Freudian agony, wobbly camp, and Oliver Stoned cameos from Robert F. Kennedy, Richard Nixon, and Charles Lindbergh. In terms of structure, Black is all over the place, pinballing between key moments in Hoover‚Äôs career (the stories are being related from the source in his dotage to his Bureau biographers), but his central idea is strong: that Hoover‚Äôs fastidious commitment secrecy was both ahead of its time and, despite its increasingly impersonal manifestations in a series of ever more elaborate filing and cataloguing systems, a direct reflection of private torment. The man who anointed himself the keeper of America‚Äôs secrets carried around his own private shame. ‚ÄúI‚Äôd rather have a dead son than a daffodil for a son‚Äù chides Mama Hoover (Judi Dench), hitting the neatly manicured nail squarely on the head.

There‚Äôs empathy in this angle of approach, and Eastwood‚Äîwhose recent growly endorsement of gay marriage in Vanity Fair seemed to come from the heart (even as he endorses Herman Cain)‚Äîrolls with it. Any critique of his subject‚Äôs unscrupulous ascendancy is submerged beneath attempts at character study. Hoover and his long-serving secretary Helen Gandy (Naomi Watts) are depicted as kindred clenched spirits: it‚Äôs no coincidence that their abortive first date revolves around locating a catalogue card listing books on the topic of ‚Äúindiscretion.‚Äù The notion that Helen, who has ‚Äúno plans to marry,‚Äù is herself trapped in the closet is nicely underplayed by director and actress both, and there‚Äôs power in the suggestion that Hoover‚Äôs vendetta against Martin Luther King Jr.‚Äîwhom he threatens with blackmail on the eve of his accepting the Nobel Peace Prize‚Äîwas rooted not in political expediency but personal resentment that the gains of the Civil Rights movement did nothing to ease the stigma of his own less visible minority.

This is provocative stuff, but unfortunately it‚Äôs also made ridiculous by its staging. Produced in the lush-yet-rushed fashion that is Eastwood‚Äôs calling card, J. Edgar compensates for its thin narrative texture with a series of overdetermined showstoppers. The shots of Hoover hunched over a tape recorder, salivating over audio of Dr. King‚Äôs extramarital dalliance while shadows intertwine on the wall, aren‚Äôt all that far from Bob Hoskins‚Äô lip-smacking, porcine villainy in Stone‚Äôs Nixon‚Äîor, for that matter, Dr. Hibbert left sadly alone with his surreptitious sex tapes on The Simpsons. If Black means for us to laugh at this sequence, or a similar bit where Hoover and Tolson giggle girlishly over revelations of Eleanor Roosevelt‚Äôs Sapphic leanings, he‚Äôs not helped by Eastwood‚Äôs middle-of-the-road presentation, which doesn‚Äôt seem in on the joke.

And the miscalibrated comedy isn‚Äôt as bad as the unintentionally amusing drama, as when Tolson, learning of his longtime boss‚Äôs desire to take on a glamorous Hollywood beard, throws what can only be called a hissy fit‚Äîsmashed wine glasses and the whole nine yards. It‚Äôs not callous viewership that makes this emotional hinge point ring false so much as disinterested direction bumping up against overcommitted acting. Suffice it to say that Hammer was on more solid actorly ground internalizing alpha-male rage in The Social Network than trying to project scalding, effeminate scorn‚Äîand Eastwood, who never met a first take he didn‚Äôt like, enshrines his star‚Äôs flailing for all time.

DiCaprio is better than Hammer in this scene and in the movie as a whole. The sense of underaged playacting that‚Äôs marked his recent roles is ironically absent in a role that actually requires a fair amount of dress-up shtick. Where Hammer gets lost in the wizened makeup (resembling nothing so much as one of the pod people in Invasion of the Body Snatchers in mid-development), DiCaprio seems to grow naturally into the role‚Äôs jowliness, and he‚Äôs got the alert eyes of a man allergic to trust. But what the hell is he supposed to do with dialogue that comes in italics like ‚ÄúDo I kill everything that I love?‚Äù He‚Äôs also badly undermined by Black‚Äôs final gambit, which is to recast all that we‚Äôve seen as the work of an unreliable narrator: if Hoover is misremembering the details of his professional ascendancy and personal anguish, then aren‚Äôt all of DiCaprio‚Äôs precisely measured gestures rendered ersatz in the process?

There‚Äôs nothing in Eastwood‚Äôs funereal presentation that even hints at this kind of embedded narrative gamesmanship: it‚Äôs not a gotcha moment so much as a weary shrug. Tom Stern‚Äôs painstakingly drab cinematography and the nudging musical score are pretty obviously on the level‚Äîthe level being that of a fall prestige picture‚Äîwith no carefully built-in ambiguities to discover later on. Instead of forcing some deeper reckoning with what‚Äôs come before, this last twist confirms that this film about a man hell-bent on keeping up appearances is itself only superficially complex.