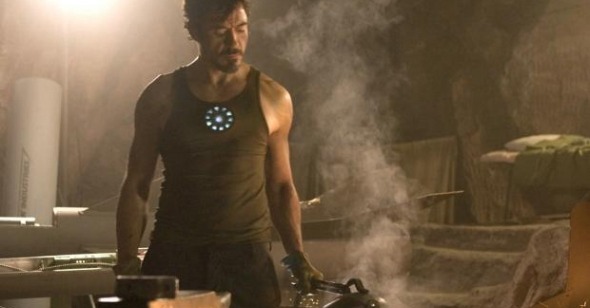 The centerpiece scene of Jon Favreau‚Äôs Iron Man finds its tin-plated protagonist jetting over to Afghanistan to lay waste to some indigenous bad guys. Form dictates that I tell you that it‚Äôs Tony Stark (Robert Downey, Jr.), a wunderkind weapons manufacturer, underneath the armor, though based on the opening weekend grosses, it‚Äôs a statistical probability that you‚Äôve already seen the film, perhaps even twice. Earlier in the film, these same rascals had kidnapped our boy Stark from an American military convoy, held him hostage (causing a near fatal injury to his heart), directed him to build them a high-tech missile, and then dropped like Team America marionettes (‚Äúdurka durka! Aahhh!‚ÄĚ) when he revealed the real fruits of his clandestine labors‚ÄĒa prototype version of the Iron Man suit. (But again, you probably knew that already).

Before Stark lands, we get a fairly standard-issue depiction of warlord malfeasance; shooting off rounds in front of scared villagers, separating children from their parents, slapping people around, scowling. Stark touches down and proceeds to kick ass, implacably absorbing his foes‚Äô gunfire, flooring them with palm mounted force cannons, and, in the coup de gr√Ęce, scanning a crowd comprised of terrorists and hostages and, having instantly figured out who‚Äôs who, (we go inside the helmet and see a Terminator-style visual readout), dropping the nasties with whisper-quiet precision blasts. Quick, easy, and, above all, neat‚ÄĒand then he‚Äôs off.

As far as do-goodery goes, this Middle Eastern excursion beats pulling cats out of trees; the joke is that it seems about as effortless. The scene feels like neo-conservative wish fulfillment‚ÄĒimagine a piece of military hardware that can enter another country undetected, automatically distinguish between the guilty and the innocent and emerge with its chassis and reputation unscathed. (Not to mention the fact that Stark‚Äôs turbo-charged interventionism is tinged by personal vengeance; he didn‚Äôt choose that particular corner of Afghanistan by accident). But Favreau‚Äôs film is too canny to tow any sort of political line (especially not an unpopular one; there are untold millions of dollars at stake, after all) and so its stance on American military might gets some token complications (though it never denies that the suit looks really cool!). Stark‚Äôs business partner and mentor, Obadiah Stane (a creepily avuncular and magnificently bearded Jeff Bridges) is revealed to be in bed with the Afghanis‚ÄĒand, furthermore, determined to sell Stark‚Äôs ingenious weaponry to the highest bidder. So we have evil terrorists (fair enough) and a compromised military-industrial complex (of course), leaving Tony Stark‚ÄĒa newly repentant war profiteer surveying the damage caused by his creations and having a subsequent (and literal) change of heart (once more for form: his shrapnel-damaged ticker is being powered by the same small and unaccountably powerful reactor that makes the suit go)‚ÄĒas the most sympathetic figure around.

I won‚Äôt spend too much time talking about Downey‚Äôs work here, as everyone else has gotten there first; suffice it to say that such a wide-awake actor in the sort of role that too often countenances somnolence (recall Brandon Routh‚Äôs sulky Superman) was a very good idea (just as it was back in 1989 when Michael Keaton stepped into the Batsuit). To a certain extent, Downey is simply relying on shtick‚ÄĒthe tongue-in-cheek motormouth act he perfected in (the near-perfect) Kiss Kiss Bang Bang‚ÄĒbut it‚Äôs good shtick, anyway, and tough to begrudge in this context. When a convalescent Stark calls a press conference to inform the dubious masses of his new peacenik tendencies, he slumps tiredly in front of the podium, cheeseburger in hand, and asks the journalists to sit down, too: the gleam of self-satisfaction when they assent unites the character and the actor in supreme bemusement.

If the performance grows less interesting as the film goes along, it‚Äôs because Favreau has front-loaded the good stuff: Iron Man eventually boils down to two guys (one good, one bad) donning robot suits and throwing down in the middle of the street, and issues of whether this stuff is relatively well-done (which it is) are subordinate to frustrations that they (‚Äúthey‚ÄĚ being Hollywood screenwriters) still haven‚Äôt found a way to escape this kind of structural strait-jacket. The clever touch of having a severely weakened Stark power up for the final battle by re-inserting the first version of his pacemaker‚ÄĒwhich his long-suffering but lately amorous assistant Pepper Potts (Gwyneth Paltrow, trying surprisingly hard and coming up with a charming little turn) had placed under glass with the legend ‚ÄúProof That Tony Stark Has a Heart‚ÄĚ‚ÄĒis merely that: clever. It‚Äôs too spelled-out to be truly affecting (the same goes for the resurrection imagery when Tony emerges from his cave prison).

Still, clever and cogent beats idiotic and incoherent, and Iron Man is spryer than the overwhelming majority of films in its budget range. Favreau showed a talent for framing handmade special effects in the enjoyable Jumanji-in-space romp Zathura, and Iron Man‚Äôs best moments are similarly low-fi: a relaxed montage of Stark fine-tuning the suit in his workshop, ostensibly shot by his own surveillance cameras, alternates between oopsy-daisy comic setbacks and miniature eureka moments, all leant extra credibility by the camcorder-ish visual texture. (There‚Äôs one great, Jackass-style slapstick gag that fairly reeks of Ebaumsworld.com). This section is crowned by a nighttime flight-test that showcases Matthew Libatique‚Äôs clarion cinematography and Dan Lebetal‚Äôs seamless cutting: it‚Äôs not an action sequence, exactly, but I can‚Äôt recall the last FX set piece‚ÄĒor, for that matter, the last ‚Äúsummer movie‚ÄĚ‚ÄĒwith this kind of stratospheric kick, even if it‚Äôs only intermittent.